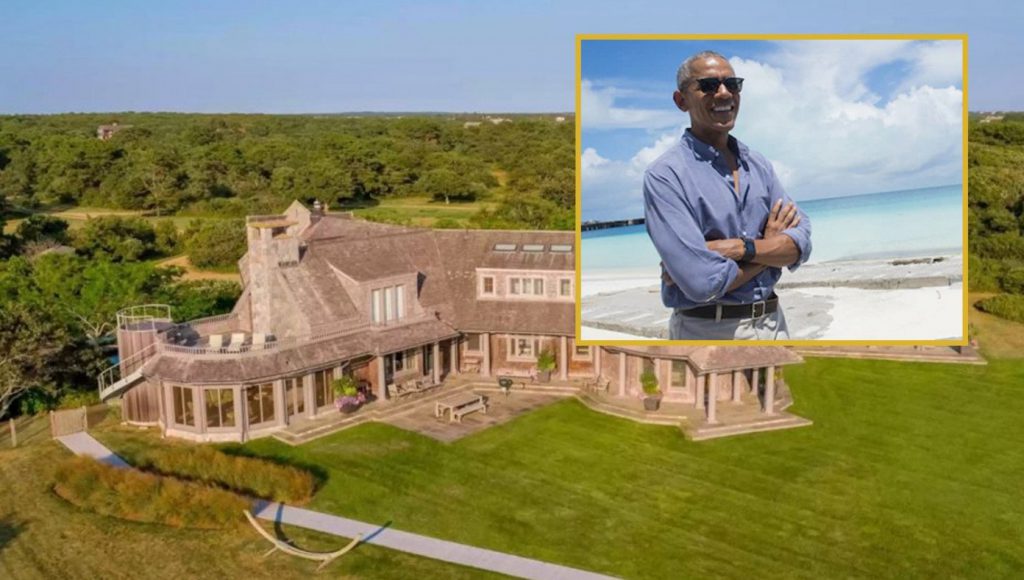 Hero: Obama Holds Superspreader Event On Climate Change-Endangered Property To Show People What Not To Do “As he always has, Barack Obama is showing the way by doing the exact opposite,” said NBC anchor and global megastar Chuck Todd. “Once again, the chosen one has seen fit to bathe us in the warmth of his glory and light. We look to our great Hope as the purest, most muscular, most cool example of all the things one should never do during a pandemic on a coastal town affected by sea-level rise. Thank you, sir, from all of us—the American people.”

“To be ignorant of what occurred before you were born is to remain always a child. For what is the worth of human life, unless it is woven into the life of our ancestors by the records of history?” ― Marcus Tullius Cicero

Even more dramatic when you go back to 2014.

Power leakage, like a pig lagoon spilling into an alpine lake, poisons the marketplace of ideas with delicious nutrients. Ideas that make the institutions more powerful grow wildly. Eventually these ideas evolve carnivory and learn to positively repress their competitors, which is how our free press and our independent universities have turned our regime into Czechoslovakia in 1971, and our conversation into a Hutu Power after-school special. PS: Black lives matter.

Even Xi, whose country can quite easily imagine becoming the economic center of the world, is a provincial strongman—in fact, he sent his daughter to Harvard. Sad!

The Party Of Fear Is Relentless – Western Rifle Shooters Association Stand your ground. Keep building your accountability lists. Help calm the terrified. There will be a reckoning.

Cori Bush: I’m going to make sure I have private security but defunding the police needs to happen. pic.twitter.com/6jbv4HLlGs

“The Party seeks power entirely for its own sake. We are not interested in the good of others; we are interested solely in power, pure power. What pure power means you will understand presently. We are different from the oligarchies of the past in that we know what we are doing. All the others, even those who resembled ourselves, were cowards and hypocrites. The German Nazis and the Russian Communists came very close to us in their methods, but they never had the courage to recognize their own motives. They pretended, perhaps they even believed, that they had seized power unwillingly and for a limited time, and that just around the corner there lay a paradise where human beings would be free and equal. We are not like that. We know that no one ever seizes power with the intention of relinquishing it. Power is not a means; it is an end. One does not establish a dictatorship in order to safeguard a revolution; one makes the revolution in order to establish the dictatorship. The object of persecution is persecution. The object of torture is torture. The object of power is power.” – Orwell’s 1984 THE PARTY OF FEAR IS RELENTLESS – The Burning Platform

Now the ‘I work on the COVID floor at my hospital’ variant is spreading on Twitter thanks to a veterinarian – twitchy.com

The life expectancy of a character in a public information film was roughly 4.3 seconds. pic.twitter.com/S9ya9C2Psb

Betteridge’s law of headline is an adage that states: “Any head­line that ends in a ques­tion mark can be an­swered by the word no.”

Intelligence is the ability to sense useful patterns in apparently chaotic data. Useful patterns are not evenly distributed across the scale of complexity. The most useful are the simplest, and the easiest to sense. This is a classic recipe for diminishing returns. 140 has already taken most of the low-hanging fruit—heck, 14 has taken most of them.

Let’s play “Name that Demographic” Texas gunman stoned to death after shooting into crowd, killing 1 and injuring 3 Police say the shooter was then chased by several party-goers which prompted the shooter to fire into the pursuing crowd. In response to being fired upon, police say the pursuing mob began to pelt the gunman with landscaping stones and bricks. The gunman was repeatedly stoned by the pursing crowd, police said, but still managed to fire his weapon several times striking at least two more people. One of the individuals struck by the gunfire died from their injuries. The gunman was killed at the scene after being repeatedly struck with stones and bricks by the party-goers. Police say all involved individuals in the incident knew each other.

Beware the Ideology Pimps An Ideology Pimp is, simply put, a grifter, a con-artist; a person who had nothing of productive value to offer in life but who has been able to identify an idea or accusation that enables them to galvanize others (sometimes vast numbers of others) to perpetuate their grift. They will use anything- racism, equity, patriarchy, sexism, fascism, capitalism anything that raises emotions and sets people against each other- the angrier, the better. They do not care what is destroyed or who is hurt in the process.

Raconteur Report: What Part Of “Existential” Don’t People Get? You aren’t going to pick the peas, carrots, and scrambled egg out of the fried rice, and divvy up neat little enclaves. It’s not possible. It’s not practical. And no one could ever do it, in a million years. And even if you magically could, where in hell do you think you’d put them?? No one else wants them, here nor anywhere else. You might could palm them off on Cuba, but only if they can swim there. The only thing that will work EVER, is going to be bog-simple: One side is going to be alive within US territory afterwards. One side is not.

Jeff Bezos does not really own the Post. He sponsors it, as if it was the Indy 500. If he sponsored the Indy 500, and decided the cars should have five wheels and a rocket exhaust, and also it should go farther and become the Indy 2500, they would tell him to go pound sand. If he started telling the news desk what to write and cover, like Hearst, or even like “Pinch” Sulzberger, they would laugh at him and quit. (Pinch’s heir, sadly, seems to have ceded that power to the NYT’s Slack—like many a weak monarch of a waning dynasty, letting his authority decay into an oligarchy. Hard to get it back, bro.)

Photos Show New York’s Central Park Great Depression Hooverville The group of unemployed living in crude huts in the Central Park lower reservoir may be forced from even these inadequate homes if plans for the proposed conversion of the reservoir into a children’s playground are completed. Here is a closeup of one of the shacks and its occupant. It is built at the entrance of a water conduit.

I don’t have tats for the same reason that no one puts a bumper sticker on a Rolls Royce. https://t.co/j4CN17xrFP

Next post: Noted in Passing: “It’s OK when Bill does it.”

Previous post: Take a break and gimme some of your lovin’ for Dusty Hill