The License of the Press by Mark Twain 1873 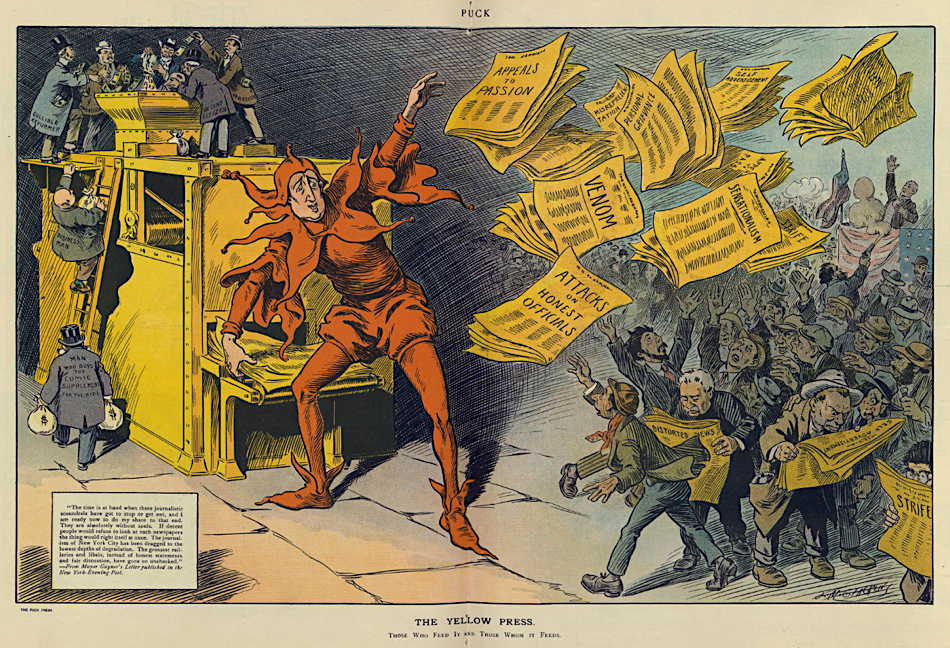 The press has scoffed at religion till it has made scoffing popular. It has defended official criminals, on party pretexts, until it has created a United States Senate whose members are incapable of determining what crime against law and the dignity of their own body is, they are so morally blind.

The press has made light of dishonesty till we have as a result a Congress which contracts to work for a certain sum and then deliberately steals additional wages out of the public pocket and is pained and surprised that anybody should worry about a little thing like that.

A free press is more than free when it is licensed to say any infamous thing it chooses about a private or a public man, or advocate any outrageous doctrine it pleases. The public opinion which should hold it in bounds has itself degraded to its own level.

It seems to me that as our newspapers increase, our morals decay. The more newspapers the worse morals. Where we have one newspaper that does good, I think we have fifty that do harm.

We ought to look upon the establishment of a newspaper of the average pattern in a virtuous village as a calamity.

The difference between the tone and conduct of newspapers to-day and those of thirty or forty years ago is very noteworthy and very sad.

In those days the average newspaper was the champion of right and morals, and it dealt conscientiously in the truth. It is not the case now. The trouble is that the stupid people who constitute the grand overwhelming majority of this and all other nations do believe and are moulded and convinced by what they get out of a newspaper, and there is where the harm lies.

Among us, the newspaper is a tremendous power. It can make or mar any man’s reputation.

It has perfect freedom to call the best man in the land a fraud and a thief, and he is destroyed beyond help. Whether [Insert Name] is a liar or not can never be ascertained now but he will rank as one till the day of his death for the newspapers have so doomed him.

In the newspapers of the West you can use the editorial voice in the editorial columns to defend any wretched and injurious dogma you please by paying a dollar a line for it.

That awful power, the public opinion of a nation, is created in America by a horde of ignorant, selfcomplacent simpletons who failed at ditching and shoemaking and fetched up in journalism on their way to the poorhouse.

I am personally acquainted with hundreds of journalists, and the opinion of the majority of them would not be worth tuppence in private, but when they speak in print it is the newspaper that is talking (the pygmy scribe is not visible) and then their utterances shake the community like the thunders of prophecy.

I know from personal experience the proneness of journalists to lie.

I once started a peculiar and picturesque fashion of lying myself on the Pacific coast, and it is not dead there to this day. Whenever I hear of a shower of blood and frogs combined, in California, or a sea serpent found in some desert, there, or a cave frescoed with diamonds and emeralds (always found by an Injun who died before he could finish telling where it was), I say to myself I am the father of this child I have got to answer for this lie.

A Detroit paper once said that I was in the constant habit of beating my wife and that I still kept this recreation up, although I had crippled her for life and she was no longer able to keep out of my way when I came home in my usual frantic frame of mind. Now scarcely the half of that was true. Perhaps I ought to have sued that man for libel but I knew better. All the papers in America with a few creditable exceptions would have found out then, to their satisfaction, that I was a wife beater, and they would have given it a pretty general airing, too.

I have a sort of vague general idea that there is too much liberty of the press in this country, and that through the absence of all wholesome restraint the newspaper has become in a large degree a national curse, and will probably damn the Republic yet.

Next post: The Last Straw (Updated and bumped for the new sttel straw lethality factor)