So I am out and about in this college town which is clotted on every street downtown with some sort of current PC cucksanity… and I stop into a non-Starbucks for a cup o’ joe at, what, twenty cents a sip now? It’s a nice place if a bit pricey, but it is very, very correct. Politically, that is.

As you may remember, the blow struck against global warming/cooling/moisting/changing by California this year was to ban automatic straw giving in restaurants. You can (for now) still have a straw but you have to ask for it. This has something to do with something in the pea-sized brains of the climatecucks. I guess it is to battle the booming carbon footprints of India, China, Africa, etc. We only get straws on request in California because it stops the ice caps melting faster than the Indian, Chinese, and African exploding populations who all want stoves, cars, refrigerators, air conditioning can do it. Right? Right.

Anyway, I go up to pay for the coffee and I see this on the counter: 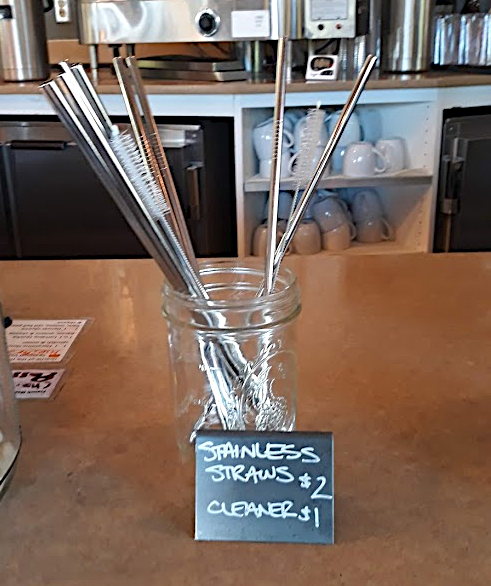 This is the ultimate “I Care About the Precious Earth” accessory. You buy it once for two bucks and tote it around in your purse or pocket or ass so you can whip it out in other restaurants and others in your karass of demented yokels can marvel at your caring. Then y ou also buy, for one buck, that little straw reamer so you can shove it into the straw and whip out any evil germs that may otherwise grow crusty within.

On what planet is this product created? First, you have to have the meeting and actually decide to have these fabricated out of stainless steel. (Not cheap.) Then you have to have a distribution and sales force to go out into the world and palm these chunks of shit off on shopkeepers sure enough of the enviro-dementia of their clientele to order a handful. Then there’s some paperwork for the selling of it to the store. Then the store makes a cute gurly sign and sets it out, with pride, on the counter. And then, mirabile dictu, some of them are actually sold — either to gurls or to men in drag identifying as women.

Elena Struthers-Gardner, 60, suffered horrific brain injuries in the freak accident. She was carrying a mason jar glass with a screw-top lid when she fell in her home. The 10inch stainless steel straw entered her left eye socket and pierced her brain. She was found lying on the kitchen floor in Poole, Dorset by civil partner Mandy

The inquest heard she had suffered with mobility difficulties following a horse riding accident when she was 21-years-old.

Following a reduction in her high levels of fentanyl pain medication, she had become alcohol dependent.

In the months leading up to her death, she had been drinking around half a litre of vodka a day, mixed with orange juice, from the mason jar cup, using the metal straws which were a birthday gift.

Due to severe pain from her riding accident, which caused multiple fracutres to Mrs Struthers-Gardner’s lumbar spine and caused scoliosis, she was prone to falling over, collapsing ‘like a sack of potatoes’ at random intervals, her wife added.

‘There was no alcohol present in the urine sample so intoxication did not contribute to the fall.’

He added: ‘Clearly great care should be taken taken when using these metal straws.

‘There is no give in them at all. If someone does fall on one and it’s pointed in the wrong direction, serious injury can occur.

The whole process brings to mind this lucid moment from Blazing Saddles:

Previous post: The License of the Press by Mark Twain 1873