The News of the Day 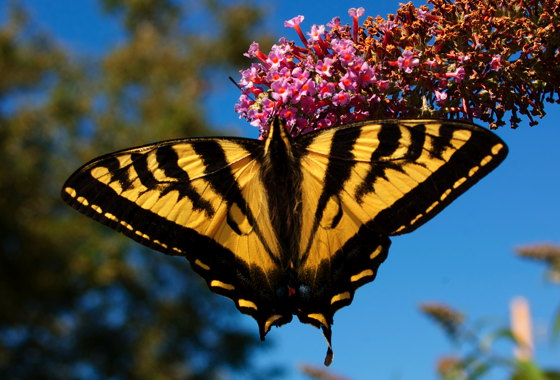 There is a world dimensional
For those untwisted
By the love of things irreconcilable.
–Hart Crane

Sometimes, far too seldom, I like to go out into my neighborhood of Queen Anne in Seattle. I like to go out and see what the world dimensional is up to; to exercise my far-too-sedentary body. The problem is I don’t do it enough. It never seems compelling. Jogging, walking, reps of all sorts for exercise’s sake fill my spirit with inertia. To the sleeping mind, all walks seem the same — pretty flower, overgrown lawn, cute little house, sad big McMansion, jogger with perky breasts, jogger with miles to go hanging from her thighs. As the song says,

But, from time to time, out I go. And recently when I went out the mantra, “There’s never nothing happening,” echoed in my mind. I decided to test it. I decided to wake up! and take a look around.

Waking up when you’re already awake is something that takes constant effort and a life to learn. You first need to wake up to the fact that you are sleep-living; a state that most humans inhabit every waking second of their life. Just knowing you’re asleep isn’t enough though. You have to decide to wake up, to be present in the present; to inhabit the present moment no matter what lullaby your monkey mind may sing to return you to slumber. The monkey mind is an enemy; an enemy sitting on a throne of lies. The monkey mind only jabbers its drone to drown you in regrets for the past and fear for the future. Your monkey mind is a liar, but it is a clever liar and it gives no quarter. When you put yourself on trial the verdict is always “Guilty…. but with an explanation.”

It doesn’t take a sage to glance at the current political and social and entertainment landscape of America to tell you that many prefer sleep-living to wakefulness. Not only that, the sleepers have a growing resentment towards those who continue to insist on wakefulness. It is as if much of our nation has fallen “half in love with easeful death;” with faux-freedom and golem-government set on cruise control. That’s only one reason why it is more important than ever to know and to act in the world in every moment in the belief, “There’s never nothing happening.”

Looking out into my little world up above Seattle on the crest of Queen Anne Hill, I got Yogi Berraized and “saw a lot just by observing.” Then I took a walk.

I recorded it all on my mental video:

Here are some jump cuts, zooms, slo-mo, and freeze frames:

♠ Couple having coffee outside Bustle. He’s expounding. She’s listening, smiling a false smile and pretending to be fascinated. Not married. They will marry; him out of a need for love, her out of a greed for things. It will last until his need is not met and/or her greed not satisfied. Written on the wind.

“No good. No bueno. Hustling myself.” Wake up!

Look around and look deeper.

Once and once only.

♣ Mixed race couple holding hands and walking with their two beautiful children, boy and girl, the coffee-colored compromise of America made real, heading to the Safeway. Their love as strong and lithe as their children.

♥ Hipster couple coming back from the Safeway. He hasn’t shaved. She doesn’t care. Their little girl in the stroller is pumping her chubby pink legs trying to kick off her new pink flip-flops.

♦ Trendy young girl with spider-web tattoo on shoulder listens intently on her cell phone to a friend and then complains that their numbers may be recorded by the NSA. Crosses the street unconsciously confident that no car within ten thousand miles will explode. Resenting the reasons why.

♠ Homeless man sitting half in the street reading a thumbed paperback he’s plucked from the garbage can next to him. It’s a page-turner and he’s turning the page.

♣ Couple lounging outside the laundromat. At ease with each other and waiting for their tumbling, mixed laundry to finish drying. Her hand brushes lightly along his thigh. He pushes his thigh against her hand. May their clothes dry quickly.

♥ One overwhelming orange bloom of an Opium poppy growing alone out of a heap of rich black compost in a back alley.

♦ On a half-blown lilac bush a Tiger Swallowtail butterfly with one tip of one wing torn off. The scent of the lilacs.

♠ Scrawled sign above a raft of reeking garbage cans in the same alley, “Get Out! Police have been called.”

♣ Whirring slapzap of a weed-whacker shaving a small man’s small patch of lawn. Scent of the fresh-cut grass blowing across the road past the corner house which sports a skull and cross-bones flag on a pole, and a line of worn Tibetan prayer flags strung along the porch.

♥ A sleek jogger swoops by across the street, her bare shoulders pale in the sun, her bright red hair lifting in the lambent light behind her as she runs into a wind of her own making.

♦ The cell phone sounds the opening bars of the 9th Symphony. An old friend reveals a moment of God’s grace and the ending of a pain that has been with him daily for decades.

Listening to his relief and happiness, I turn a corner towards my own home and come face to face with a small gray house festooned, roof to lawn, in a thick drenching of lilac blossoms that tumble my mind into blankness with the tsunami of their perfume.

I walk onto my own lawn and stand for a moment under the 40-foot willow shimmering above me and glance into the playground across the way where a basketball game played by one man flows back and forth across the blacktop. 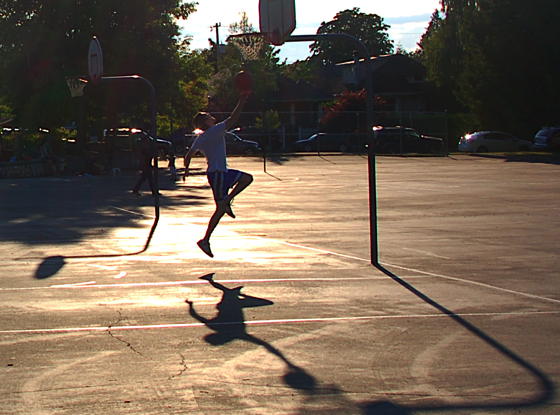 The light of life and the hand of God lie gently across all of Queen Anne on this April afternoon.

Moments by Will Hoffman

in the center of the sky.

Republished with revisions, variations, and additions from August 2009

Next post: Strange Daze: Tyger Tyger, burning bright, In the forests of the night; What immortal hand or eye, Could frame thy fearful symmetry?

Previous post: Noted in Passing: Pelosi buys a new place to drink herself to death