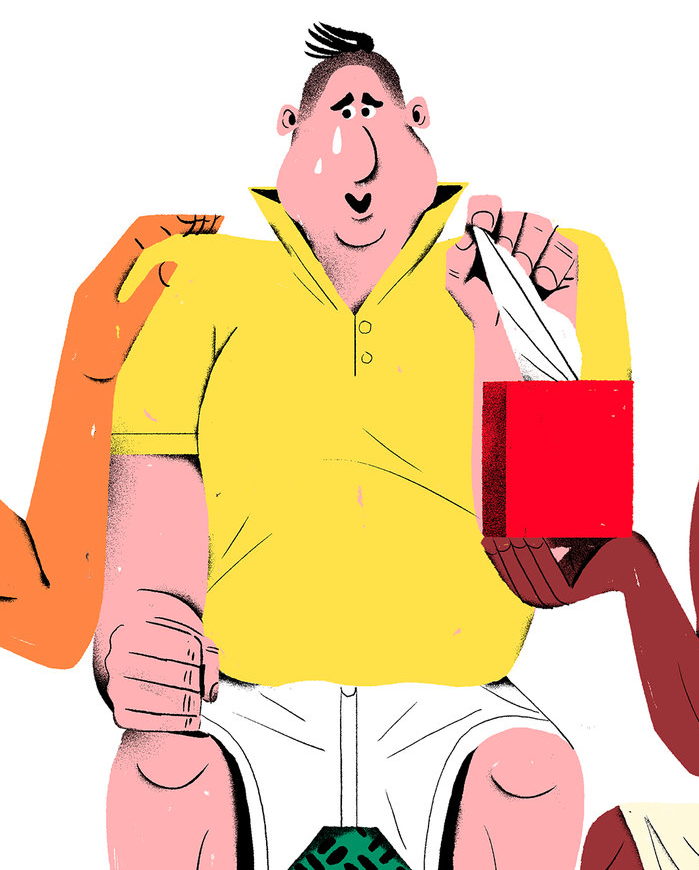 So I’m standing in line in a sandwich shop down San Diego way, waiting to see if two chicken salad sandwiches will yield any change from a $20 (They don’t.) when this guy my pal knows staggers in the door and joins the line. He’s the blonde, aging, and pear-shaped frat-boy type common in the whiter parts of San Diego. He’s on a life pension from his grandparents; something common in these Californicated places. As such he’s an elite member of the Maynard G. Krebs Zero-Work Brigade and not accustomed to reversals of fortune.

Looking at him this AM it is possible to see he is a reasonably good-looking man, but just. This is because, besides a distinct wobbling lurch in his step, he also appears to have gone ten rounds with Mike Tyson in his prime.

His nose is thickened along with the rest of his face, and not just from a lifetime’s love affair with single malt. There’s a huge frresh scab across the bridge of his nose and a larger one crusting-up along the side of his jaw and under his chin giving off a rusty red gleam like some strawberry skid-marks. Both his eyes have large, dark circles around them as if they’ve gotten special attention from a ball-peen hammer, and their expression is that of a man who’s just walked out of a fire-fight in the Afghan hills into a starring role in Lone Survivor.

My pal knows this guy and introduces me. I shake his trembling hand and say, as anyone would, “What happened to you?”

“I had a bad day on Wednesday.”

“Well, I get up in the morning and go out to the garage for my car. And my car’s condition just.. just… it stops me cold.

”It’s got a flat and the tire that’s flat is the spare that I put on the week before but neglected to replace because, hey, who gets two flat tires in a week, right?

”So I have no spare and have to get the tow truck to come out and take the car to Discount Tire and me to Budget Rent a Car for some wheels. They rent me a car and I drive away for the rest of my day intending to pick my car up in the late afternoon. I do some errands and go home and hang around there for a few hours.

“Finally it’s time to pick up the car and take the rental back. I call the tire shop and they tell me I’m good to go. So I pick up the keys and go out to the car that’s parked at the top of my driveway.

“At some point in my walk, I notice there’s a bee buzzing around my head. Then I notice three bees and then an entire swarm and they are all swooping and diving at me and trying to sting me.”

At this point, the sandwich line and the entire sandwich shop have slowed to a crawl, listening.

“I get stung three times on the forehead, four times on one arm, twice on the other, and six times on my right leg.” (Polo shirts and shorts are the uniform of choice in this town.)

“So I’m whirling around and waving my arms and trying to get to my rental car when I notice that the bee swarm is thickest between me and the car.

“That’s when I decided to do one thing and one ting only. Flee!

“I turn around and still waving my arms all around me begin to run at top speed down the slope of my driveway towards the street about thirty yards away down the slope.

“Running downhill at speed in flip-flops isn’t, I’m here to tell you, a great idea since at some point I feel my hip give and, boom, I perform a perfect face plant in the asphalt.

“The good news is that this seems to throw the bees off since they leave me alone. The bad news is this face. The worse news is that just when I think that I’ll just lie there, phone 911 on my cell and wait for the paramedics since I can’t walk, my hip pops back in and I’m able to sneak around the house, and into the rental and drive myself to the emergency room.”

My pal and I murmur our condolences and gather up our sandwiches.

“Nope. When I came out this morning to go to work, another tire was flat. I walked here and now I’m afraid to go home.”

Next post: Noted in Passing: Stand not upon your going, but go at once.