Of Deflation and Chicken Feathers and Super Markets 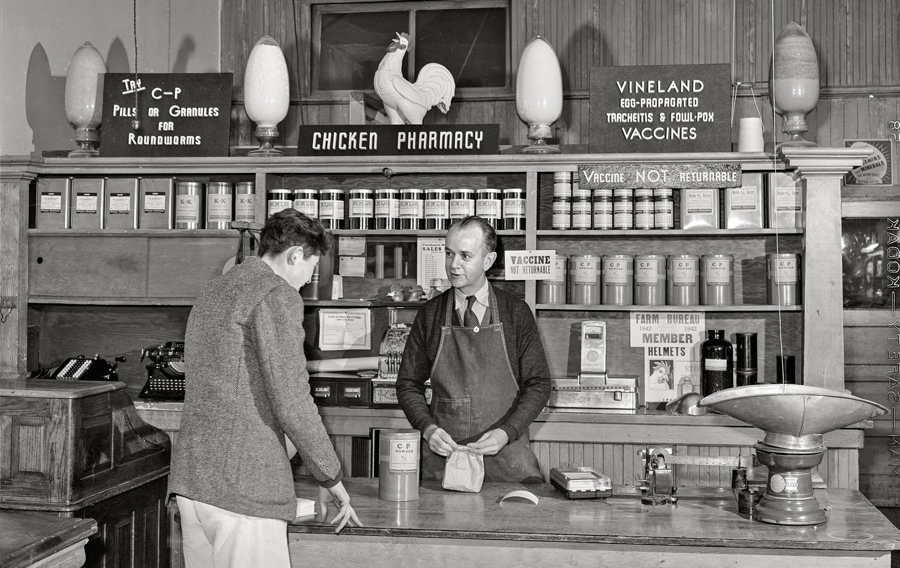 The ‘Super Market’: Eat your heart out Hale Adams RECALLS Ghost, I get it — I’m inclined to think that “real” money is gold and silver coin, or at least greenbacks freely exchangeable for gold and silver.

The problem is that the pool of goods and services is (over the long haul) always expanding. If the prices of these goods and services were fixed-in-place over the course of many decades, and if the price of gold and silver was also fixed, we would need vast quantities of gold and silver (perhaps more than is available to mine in the Earth’s crust) to make into coins to serve the economy, to allow the markets to function.

If the limits of precious metals available to us has an upper bound that we’re crowding pretty hard, and if the price per ounce is fixed, then it follows that deflation would set in. That was pretty much what our great-grandparents were experiencing in the late 19th Century — that’s when the arguments for the free coinage of silver were so widespread, and those experiences were what gave Bryan’s “Cross of Gold” speech such power.

One of the lessons our grandparents (mine were born in the 1890s) learned in the 1930s is that a persistent deflation is a recipe for disaster. Look at the CPI in the 1920s and ’30s, and you will see that the general price-level collapsed by about 30 to 40 percent in the space of just three years, from 1930 to 1933. We can argue about the root causes of the Great Depression (my own favorite is the Smoot-Hawley tariff), but the fact is that the money supply shrank drastically — in some places, people were reduced to barter because the was no money to be had.

(My father, born in 1927, could remember farmers in the ’30s coming to my grandfather, who was a small-town doctor, and asking if they could pay a small bill for, say, three dollars, with a dozen bushel baskets of apples, for example. Grandpa would ask Grandma to look at the apples: “Verna, are these apples worth $3 to you?” Dad said that you could see the gears turning in her head as she sized up the apples for her family’s consumption or as trading material, and she would turn to Grandpa and say, “Yes, Amos, those are worth $3.” Grandpa would take the bill for $3 from the farmer, and write “Paid in Full” on the bill.

(Another time, a farmer showed up at Grandpa’s office with a shotgun. “Doc,” said the farmer, “I ain’t got the money to pay this bill for twenty-five bucks. Will you take this shotgun instead?” Grandpa looked the shotgun over, decided it was a nice piece, and wrote “Paid in Full” on the man’s bill.

(There was simply NO MONEY to be had.)

Yes, high inflation (more than, say, 4 or 5 percent a year) sucks. But you have to have a small (0 to 2 percent) rate of inflation if you’re to allow the economy to work, to give it the “wiggle room” to avoid nasty bouts of deflation (again, look at the ’30s). The problem right now is that we have a “ruling class” (or so they imagine themselves to be) who confuse dollars with wealth, and think the more dollars they print, the wealthier the country is. (Some of the “ruling class” aren’t so stupid, of course, they’re just along for the ride in a cynical bid for power.) And so we are in for a rough time of it under Their Fraudulencies, Biden and Harris.

(I’m willing to cut the-powers-that-were in the ’70s some slack — the old men running the show at the Federal Reserve back then were young men in the ’30s, and were likely deathly afraid of a repeat of the catastrophic deflation they had to live through. Unfortunately, they erred too far in the other direction — 15% inflation isn’t very good for economies, either.)

(And I’m sorry, Gerard, for running off at the keyboard, again.)

So, Ghost, I sympathize — there’s something comforting about the heft of a “Walking Liberty” half-dollar or a “Morgan” dollar. But they’re gone, and they’re not coming back. And it’s not because of “theft” — it’s almost a question of physics. There just ain’t enough gold and silver to use as coins at any price-per-ounce that is close to what our parents and grandparents knew.

Auntie Analogue RECALLS: “In the 1950’s my Mom or Grandma took the pre-teen me by the hand, and walked three blocks to a chicken market on a city side street. In a stack of cages were live chickens whose cacophonic clucking made one hell of a racket. Mom or Grandma chose a chicken and one of the men behind the counter removed it from the cage and, standing behind the counter glass, with an expert blow from a cleaver, beheaded it on a chopping block right in front of us. Before the headless fowl had stopped moving the man wrenched the bird around and around in the maw of a machine whose loudly whirring rotors plucked almost all of the feathers. Then the man deftly gutted the chicken, with his hands scooped out its intestines and other inedible organs which he plopped into a galvanized steel garbage pail (I remember peering into the pail to gaze in wonder at a mass of squirming, seemingly ever-settling chicken guts). Next, the man immersed the carcass, for some long seconds, in a big steaming metal vat of boiling water, then withdrew it and expertly wielded cleaver and knife to dismember to order, dress to order, and wrap the chicken in brown butcher paper.

At home Mom or Grandma manipulated the whole chicken or chicken parts, turning them round and round to find and pluck, or to burn off over the gas range burner flame, the few remaining feathers.

How we survived eating fresh-killed chicken must remain a mystery.

My uncle raised chickens and in front of me, my brother, and my uncle’s own children, with a bird clenched between his knees and the head in his grip, he beheaded it with three or six strokes of a knife, released the headless bird inside his pen’s chicken wire fence and let it run about willy-nilly until it stopped moving. My aunt plucked the chicken, boiled it for a few minutes to kill surface bacteria, then prepared it for roasting or frying, or for potting to make chicken soup.

And my Grandma’s chicken soup, made with freshly killed chicken, was the best and, in my experience, remains unequaled.