Rant0Matic: On Karens by Tom Luongo 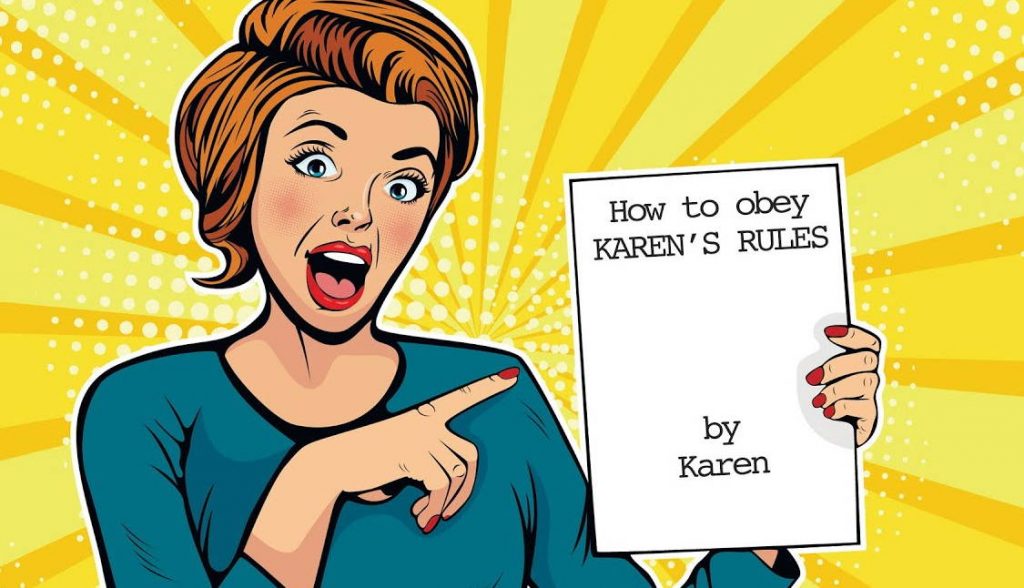 A week ago, I didn’t know what a ‘Karen’ was. Today I can’t stop seeing Karens everywhere I look. It’s like that moment in They Live! when Nada puts on the glasses for the first time.

The problem now is I can’t take the glasses off.

And I’m not the only one. In recent weeks the failed Karen meme of a few years ago has returned with a vengeance as people realize just how much damage Karens have done to our society.

A Karen is a person, usually a woman, who is never satisfied with the service she’s receiving and demands to talk to the manager. It doesn’t matter if Karen’s complaints are valid or not.

This is because Karen has been incentivized by cowardly corporate officers and government officials (but, I repeat myself) to get something she doesn’t deserve simply because they want her to shut up and not disturb everyone else.

It was one thing to indulge Karen her entitled behavior when she was getting a free order of fries or month of cable. It’s quite another when Karens become the State’s target audience for public policy.

HT: Foster
And the true Karens are the ones who are never satisfied. When they get the first thing they want it gives them the impetus to continually push the boundaries of what they can get away with.

Karens, at heart, are simply spoiled children who have never had boundaries properly set. A little power creates a self-reinforcing feedback loop.

Progressives are the ultimate Karens, never satisfied with having moved society in a terrible direction through their constant complaining. Never once do they self-reflect that maybe they’ve been wrong and all of their demands have made things materially worse rather than us not having indulged them enough.

Progressives are the worst winners I’ve ever met. They’ve won every political battle of note for the past 100+ years and are still whining in their lattes about us electing Trump, whose presidency they’ve destroyed with their incessant Karen-isms and his inherent weakness.

So is is any surprise that we’ve reached a point where the government is more worried about keeping the Karens from complaining than actually governing effectively?

And when we really look at how we’ve responded to COVID-19 it’s clear that the people behind the lock down of hundreds of millions of people knew they would have an army of Karens screaming on Twitter to ‘flatten the curve’ and quote bogus statistics they don’t understand from official smart people to justify giving full flower to their inner harpy.

You know who I’m talking about. These are the suburban women ratting out their neighbors for not social distancing, for *gasp* walking their dog or *gasp gasp* letting their kids play in the yard!

And that has enabled the worst people in the world to destroy the global economy because a bunch of frightened Karens can’t cope with the stress of living. The State cannot have people engaging in peaceful noncompliance with their edicts.

Karen-ness is a mental disorder. It’s the horrific admixture of narcissism, self-importance and solipsism which can only come from being encouraged to act badly thanks to cowardice. It leads to treating everyone else like they exist only to serve them.

Karens used to be a joke at best. They used to be Veruka Salt in Willy Wonka or the starting point of a female lead in a rom-com.

Now they run the world.

Karens are proto-Brown Shirts. They are the ultimate useful idiots of the Elite and they are destroying the world we live in. Because they are happiest when the State does something. They have no boundaries at home, so they welcome any time the State gives them what they want and then use that to bludgeon everyone else into line.

And the worst part is in this new age of gender fluidity, Karens are now found in both sexes. As guys who should know better join in the chorus of complaining about everything they don’t like.

It’s the worst in genre fandom, FYI. All you Cheeto-dusted message board warriors sitting on your gaming thrones bitching about Star Wars or Marvel are simply Karens with doobs (Dude Boobs) because you feel entitled a particular story to fill your pathetic lives with meaning.

And then when you don’t get them you want someone fired.

In truth, if you were real men you’d grow up and spend that time acquiring skills to become a man worthy of allaying the fears of all the Karens you say are destroying your favorite stories….