This is all about how a song that dropped out of the email ether today came about and how it struck and stuck, coming in right on time, and picking up its cue perfectly. And this will be pretty much stream of consciousness because.

It’s about the Sundress’ show yesterday and the choice of that strangely luminous but faintly funny video  EMBRACE SUNDRESS NATIONALISM!  and the pairing of it, in a sort of off-hand random pasting, with the widely known Shakespearean Sonnet . . . one certainly in the top three . . . if not number one with a bullet. Yes, that one.

Sundresses. Summer’s day. Sort of an automatic association. Not a hard reach at all. Made for a nice mind meld at that weld. At any rate, a couple of members saw the sundress sonnet and went and grabbed some music they’d heard,  music got raw and real. Then they just sent it in with a nice note. It was great to get. It was something that improved not only my present mood but no doubt life going forward. It was good to get and at first — when I thought about it at first — this is what my first thought thought because how can I know what I think until I see what I say:

Members…. they are there in the background mostly, out there at the end of seldom echoing mailing lists… but they are there just the same and are sensed,  and because they are there they are the most valuable things that a writer — in some odd vain sense — possesses and is possessed by. Simply put, writers need readers. Most writers don’t need many, but all writers need more than a few. What’s more than “a few?” I wish I knew.

Absent readers writers are locked-down in a one-sided one-room tournament of Echoball.

How to get out? If I knew I’d be glad to tell you… “No good…no bueno…hustling myself…” “No glot…C’lom Fliday”

But then one of the members steps up from deep background to foreground and   Startles your sleeping ears to hear That somebody thinks they really found you.

Somewhere, out there in the digital deeps, somebody sends back a Shakespearian sonnet reshaped and made into music. And then that music got live, got rough and ready, slowly takes over the whole sundress-inspired sonnet until, played against the poem the third time, it comes finally to a perfect blending.

That’s all a way of saying what something is at slant. Something that, when deeply touched, we often do, to “tell all the truth but tell it slant.” I don’t know how to put that simpler but I know I should so maybe I’ll come back to it. Someday.

Someday when I know more about how the whole miracle is continually created right in front of our eyes and that the way it rolls on and yet remains anchored in the deep past while headed toward the far future where, as the Bard observes,

So long as men can breathe, or eyes can see,
So long lives this, and this gives life to thee.

And here it is set to song. Sing along like nobody’s listening:

“SHALL I COMPARE THEE?” —from a 2013 program called Poemsong in the big Congregational church,
sung and strummed by the family doc Aaron and hardware man Mike

Your friend in Mineral Point Wisconsin, still at the piano,
Jen 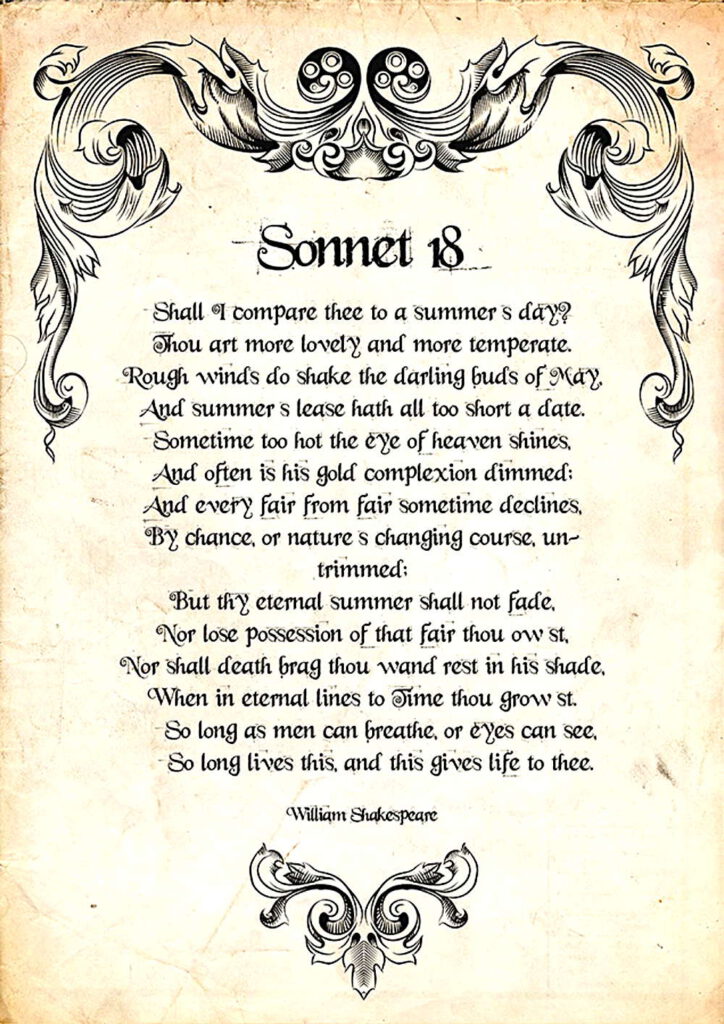 Next post: Noted In Passing: Amnesty? My ass. My wild Irish ass.

Previous post: American Perversions: The Not-So-Great Generation and the Vision That Dare Not Speak Its Name