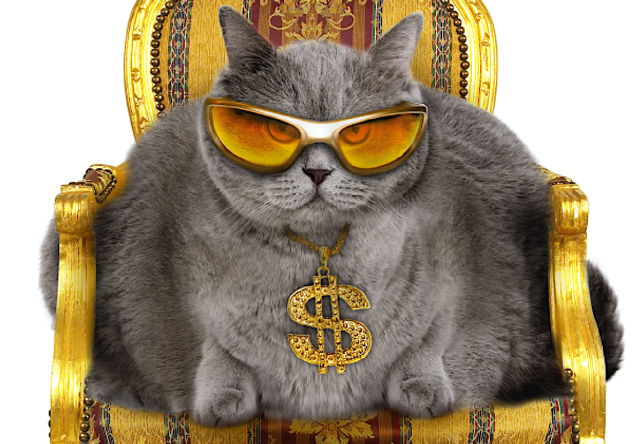 “In the past if someone was famous or notorious, it was for something—as a writer or an actor or a criminal; for some talent or distinction or abomination. Today one is famous for being famous.” — Malcolm Muggeridge

I’m a man who doesn’t like cats. I don’t understand why women and certain men don’t get the simple axiom: “Dogs? Cool. Cats? Not.” It is one of the universal truths that no sane man can deny. And yet the chicks and chestless men persist in promoting this most useless of animals which steadfastly resists domestication, becoming an agreeable amusement, and is next to useless if not downright nauseating when sauteed or roasted, grilled or boiled, or even deep-fried.

There was one cat, however, that I did come to admire; Fatso.

Fatso arrived in my life as most cats arrive in the lives of men — attached to a woman. Indeed, Fatso was one of three cats attached to this woman, and he was the least promising at the outset. The other two cats were: 1) “Spotty” — an utterly coal black cat whose only “spot” was directly under his tail, and 2) “Oswald LeWinter” — a cat who was so utterly gay that he could have been the reincarnation of Liberace. And then there was… “Fatso” — a cat so utterly beaten down and scabrous that on him a sucking chest wound would have looked good. When this particular woman arrived in my life the cats were all firmly established in hers so it was a done deal if I wanted her to stick around which, at the time, I did.

Fatso was not only a fat cat — from eating anything no matter how vile and rotten, — he was a loser cat. He was continually wandering off into the neighborhood and getting into screeching, yowling, spitting, clawing, gnawing fights with every other cat whose food bowl he tried to hoover. And he always, but always, lost and came dragging home with this flap hanging off him, that long slash in his side, and claw marks slanting across his face. His fur would be matted with urine, spit, drool, feces and blood. Fatso was one ugly beaten down fat cat.

The woman who owned him was, obviously, committed to him in the way that women get committed to hurt things, battered things, stupid things, and things that don’t really run on all cylinders. It’s their training for putting up with men, I guess. She’d hold him down and squirt this fine yellow powdered sulfur into his wounds to promote healing or at least hold off gangrene. After a day or so of recuperating around the house, Fatso would haul himself out the window and start catting about the neighborhood looking for food and finding a fight. Then, after a day or so, he’d come limping back with yet more of his body turning into scar tissue.

I put up with Spotty since he was a black cat and I didn’t want to alienate any black cat lest he put some bad juju and mean mojo on me. As for Oswald LeWinter, the gay cat, I said, early on, “Not that there’s anything wrong with that.” — even though I suspected, with cats at least, there might be. As for Fatso, well, he disgusted me. I had no use for him. I was even starting to measure him for a river diving bag.

And so it went until….. until…. until the hippy girl arrived.

In those years hippy girls were always arriving. It was what they did. They came and then… they went. And they all had…. they all had to have…. a handicraft. Some did tie-dyes. Others did very heavy and clumsy pottery. Some chipped arrowheads out of flint. Some made teepees in the backyard. Still others wove macramé diaphragms.

This particular hippy girl did beaded belts and chokers. And, needless to say, methamphetamine. She had several egg cartons holding a mass of teeny-tiny beads and a kind of wireframe loom. She’d wire up the loom, smoke a lot of dope, pop a little meth, and then crack open the egg cartons and bead up a bunch of stuff she hoped to sell somewhere along the edges of Telegraph Avenue. I once figured she was making about a dime an hour and when I told her this she said, “That much? Groovy.”

She lived in the apartment behind ours and one day, while setting up her loom, Fatso wandered by her and wiped the latest blood from his wounds on her tie-dye skirt. She glanced down and said, “Oh, Fatso. Uncool.” Then she went to work her hippy girl fingers flying lightly over her bead loom as only the young, stoned, female speedfreak can manage.

Within two hours she had finished a large cat-sized collar in beads. She called Fatso over and strapped it on him. He tossed his head a little bit since the collar was over an inch in width and must have pinched a bit on his neck, but then he seemed to accept it. He sauntered over and has he passed me I glanced down. The hippy girl had woven and arranged a collection of bright red beads against a black background to read, in capital letters, “FATSO!” (Exclamation mark included.) You could read it from six feet away. The cat, supremely indifferent to this gift, wandered through my legs, into the back garden and hobbled out of sight. “Good riddance,” I thought and hoped he’d try to kill a large delivery truck with his teeth at thirty miles an hour.

It was not to be. Instead, we heard, for over a week, a whole chorus of yelps, screeches, yowls and other indications of a virtual tomcat war breaking out across the backyards of the neighborhoods with nary a sign of Fatso limping home for repair. A few days into the week some neighbors would, walking by, remark, “Hey, I saw your cat Fatso kicking some ass the other day. Slipped him some tuna. Cool cat, man.” Other praise kept coming our way. It would seem that Fatso was becoming, if you were of a feline persuasion, a force to be reckoned with in the neighborhood.

Then late one afternoon a changed Fatso sauntered casually back into our house. It was, of course, just at feeding time and he immediately walked up to Spotty and knocked him away from his bowl. Then he turned to Oswald LeWinter and knocked him away from his bowl. Both cats began to make aggressive gestures and take on puffed up postures, but a single glance from Fatso and both shrank away and went to a far corner of the kitchen where they made faint mewling noises. He ate from each of their bowls and then his own. Then he sauntered back to the door and down the stoop and walked slowly away up the center of the sidewalk.

The woman and I, stunned, followed him at a discrete distance. All along the way as he was being passed by people, they’d glance down and, taking note of his collar, say “Hey, Fatso! What’s happening?” Some would even stop to pet him until he purred. Then Fatso would seem to give a feline shrug then and saunter on.

At his approach, other cats would disappear until he passed. Fatso had, by virtue of his collar, become known by name to the entire neighborhood. He had become famous for being famous. He’d become a celebri-cat, the first I’ve ever known.

All it took was a collar and a name and Fatso was never beaten up again and certainly never went hungry ever again. In time his saunter became a strut. You couldn’t help but like Fatso since liking him was what Fatso was all about.

In a year or so the woman and I decided to move up into the hills above the town. We packed up Spotty and Oswald LeWinter, but when it came time for Fatso he was nowhere to be found. He’d decided to stick to the old neighborhood. With nearly twenty women putting out food for him and with all the other cats living in fear of him there was no motivation to move with us. We were now “little people.” He was…. well, he was “FATSO!”

For all I know he’s still there to this day, kicking fur-butt and flaunting his name; master of his domain, King of Kats. All he needed was what we all need…. a little name recognition.

[Republished because yesterday, in contradiction to all I held sacred about cats, I brought another cat into my life, Olive.]

Next post: On Becoming Hitler by Merve Emre [Bumped]