Oh hello Mr. Soul I dropped by to pick up a reason
For the thought that I caught that my head is the event of the season
Why in crowds just a trace of my face could seem so pleasin’
I’ll cop out to the change but a stranger is putting the tease on

“Written by Young after experiencing an epilepsy attack after an early show with Buffalo Springfield in San Francisco. Many people in the audience were questioning if it was part of the act. While being a patient at UCLA Medical Center, he wrote the song once he was awake and recovering and told to return for further tests. The lyrics reflected Young’s experience, feeling as though he was about to die. Thereupon, he was advised by his doctor to never take LSD or any other hallucinogenic drugs.“ 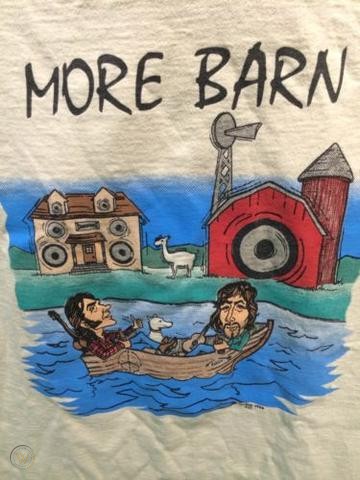 The man is totally committed to the muse of music. And he’ll do anything for good music. And sometimes it’s very strange. I was at Neil’s ranch one day just south of San Francisco, and he has a beautiful lake with red-wing blackbirds. And he asked me if I wanted to hear his new album, “Harvest.” And I said sure, let’s go into the studio and listen.

Oh, no. He has his entire house as the left speaker and his entire barn as the right speaker. And I heard “Harvest” coming out of these two incredibly large loud speakers louder than hell. It was unbelievable. Elliot Mazer, who produced Neil, produced “Harvest,” came down to the shore of the lake and he shouted out to Neil: How was that, Neil?

And I swear to god, Neil Young shouted back: More barn!

Next post: The Wreck and the Raft by John Fowles

Previous post: Noted in Gassing: Up Up and Away!