The difficult thing about being a peasant in America is that we inherit the ideas that:

It’s a big country
We are owed freedom
These complement each other in such a way that we have a sense that there is some part of America that’s just right for us if we can only get there, or that if we could get the wrong sorts out of where we are, we would be there. As such, there is always room for them and us, just don’t get in our way.

Much, therefore, needn’t be resolved so long as we segregate ourselves properly. In so doing, we find we have not bothered to learn the art of collaboration, outside of what our employment demands of us, and partisan moral effrontery rewards us in the self-esteem and attention-seeking department.

If it’s not our full-time graded job to make a better society, we’re left as consumers of the dreck we’ve made of it, ever complaining even louder now that we’re outnumbered by worse peasants than we are. I still say that peasants are good company, because your auntie is, and you know exactly which auntie I’m talking about. The kind, smart, generous one who never visited New York City, but could probably teach them all a thing or two. But I’m here to talk about the geniuses, sub-geniuses, and underemployed. It might include your auntie if she ever screwed up the courage to leave the boonies of Indiana. To remind you… 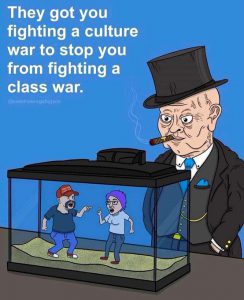 If you remember my Peasant Theory, it tells you that there are three functional classes of Westerners in general and Americans in particular (as it was generated thinking about the devolution of American democratic institutions). They are the Ruling Class, the Genius Class (aka the Slice), and the Peasant Class.

These classes apply across every endeavor and so it applies firmly to my profession and yours. I reiterate that simply because one is a peasant doesn’t mean one suffers in misery. We have many millions of quite comfortable peasants. They simply have no authority and their expertise is not indispensable.

Understand as well that we Americans do not find any of these classes unapproachable. We are all very pleased to party with whoever shows up, regardless of their situation in one of the three groups. Furthermore, we all sustain the hope that there is always a possibility of upward mobility. Yeah well… When a peasant tries to act like a genius or a ruler, the results are predictably sad. Keyword “In over your head”. When a genius tries to act like a ruler you get Dr. Emilio Lizardo. Here is your handy guide for the failures of upward and downward mobility that should sound familiar. If you need further explanation, hit me up in the comments section.

You Are A Peasant – by Michael DC Bowen 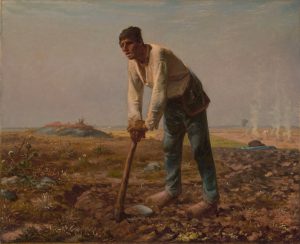 The Peasant Class (85%)
The American peasantry is made up of those people who are essentially disqualified from the broad critical national meritocracy.

Here’s how to know you are a peasant. The biggest boss you report to in your line of work does not work directly for the ruling class. That means if you work at Xerox and your boss’s boss is not in regular contact with the CEO, you’re out. Even if that is the case and your CEO is not in the Fortune 500, then no, you’re still a peasant.

Part of the usefulness of this categorization is to help you understand and take pride in your peasant self. Certainly, all peasants are not alike and I want to stress to you that there is no shame in being a peasant. Nor do I suggest that one has a particular duty to your class or your classmates. I am merely delineating class lines and helping people recognize what class actions are more or less likely to actually produce a change in the larger society.

The Genius Class (12%)
You are in the GC if you are in a fairly tight relationship in your area of expertise with members of the ruling class. Some of these hierarchies are short, some are very deep, but you have a clear idea of where you stand when thinking about disaster or drastic change. If you are the person responsible for setting up the studio mics for Radiohead’s next album then you are GC. College professors, surgeons, and top professionals in every industry are geniuses. The key to being in this stratum of society is that without your ascent and competence the rulers have little or no agency. The genius is the man behind the curtain in the throne room of the Emerald City, without whom there is no great and powerful Oz.

The GC is a meritocracy, but the quality of that meritocracy is subject to the direction of the Ruling Class. The rulers can pick Walter Cronkite or they can pick Keith Olbermann. They can pick Warren Christopher or they can pick Newt Gingrich. Genius is abundant in America, and there are more than enough who are qualified to be on the first team. Indeed this deep bench of genius is what makes America a stellar nation – it is something we still retain. Nevertheless, genius can be ignored. Genius can be fired. Genius can be excommunicated and banished into obscurity. 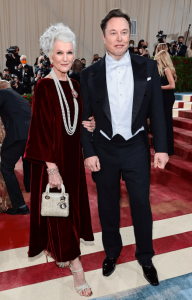 The Ruling Class (3%)
The rulers rule because they can give you what you cannot give yourself, no matter how brilliant or creative or rich you might be. They they can deliver the opportunity for glory. It is prestigious just to be associated with the Ruling Class. You can’t give yourself a Pulitzer Prize, a Purple Heart or even a Daytime Emmy. Such honors are bestowed by the ruling class. That’s not all the rulers do. They, like all rulers, retain license to wield power, and only the power of rulers yield up power to others and crown them. The rulers are rulers because they make the rules. It’s pretty much that. They are not easily displaced because, first of all, they rule over armies of geniuses to defend their fiefdoms. More importantly, rulers rule because they can break the rules. Theirs are the infinitely crafty ways and means of power.

The Purpose of War – by Michael DC Bowen

People will say that Putin is crazy, but they will not understand his ideological purpose. People will say that violence never solves anything, but they will be blind to the solutions desired by those ordering tanks engagements and warplane sorties. As the affluent friends of Doc will find solace in Germany and Italy today, will they be protected by NATO tomorrow? Some of that will depend on Germany’s dependence on Russian and likely Ukrainian natural resources and the pipelines that deliver them to a Western Europe that has been seduced away from Atoms for Peace. We Americans have no hand in the energy security of Western Europe because nobody the Washington Post ever bothered to poll put such questions to the public. Remember when the City of Berkeley outlawed the use of natural gas? The price of oil just surpassed $100/bbl. Tanks don’t run on wind power. Have no doubt that Putin will bomb any solar panels he may find in Ukraine as targets of opportunity.

The Culture War is not war, it is children cheating at cards.

The purpose of war then is to restore human faith in cause and effect. It is to remind us that life and death decisions are part and parcel of our thinking. It is to set our eyes on the ultimate truth of human conflict and struggle and to remind us that shit gets real. It is to familiarize ourselves with the reality of the smell of shit and death and keep it close enough in our minds so that it is never far from our agenda of peacemaking. Today we are close enough to see, but not hear, taste, smell or feel. The very least you can do is keep your eyes open and think a bit more.

The honest man, on the other hand, has a grip on his modesty. As my commenter said last week, “If you have to associate with that kind of filth in order to get published or get attention, then that’s attention that’s not worth having.” The converse corollary to that is what Prince said. “You eventually get the audience you deserve.” So the point here is to make the best music you can make. And for me that meant being honest about what I know and not trying to play ambitious games with it. It’s about being organic to an extent that is rare. It’s about wanting $50 a year from 1,000 honest subscribers rather than $5 a year from 10,000 mindless fanboys. It means you have to work that much harder to deserve the higher price. It means writing 20 years for free to become the writer you wish to become. Or as Doc put it to me this morning, it’s about playing for the love of the music, not the applause.

Rare insights from a man who is himself.

Next post: “It was a trans man.” Man Assaults Dave Chappelle on Stage at Comedy Festival