The Slow Suffocation of California

This is the new tiered system just announced by @GavinNewsom to provide California counties with guidance re: re-opening.

Counties must remain in each tier for a minimum of 21 days before being eligible to move into the next tier. 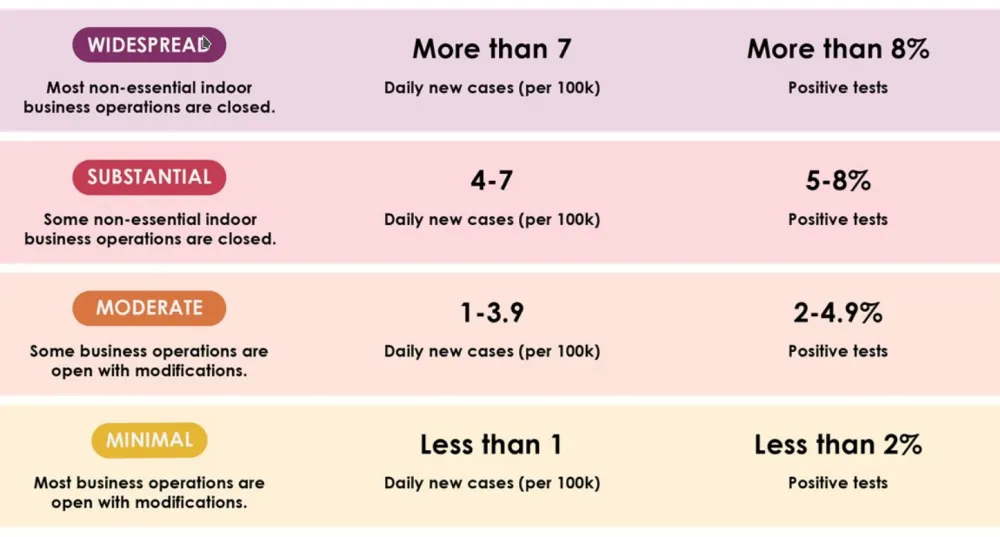 There appears to be no one of intelligence or goodwill left in charge in that once great state. 1 to 3.9 “cases” per 100,000 to reach the utopia of “some” businesses opening. Some!

My dear readers, what is the false positive rate for coronadoom testing? Yes. In the range of 1 to 3.9 per 100,000. Not only that, look at the bottom category, which requires 1 in 100,000 for only “most” businesses to reopen with “modifications”.

Do the brilliant minds—they tell us of their genius constantly—in California universities and government not know that COVID will never go away? That there will always be positives showing up on tests forever, not only the fake positives, but real ones, too?

And this is just testing! I.e. “cases”. Not deaths, or even, the good Lord help us, illnesses! Positive tests! My mind has actually boggled.

California will never reopen if these guidelines are adhered to. I mean never as in never.

This Newsom has reached a very special level of evil stupidity thought by scientists to be impossible. Personally, since I do not live there and the idiocy is causing many people I loathe (hello, Hollywood!) great pain, the longer it lasts the funnier it becomes, in a dark sort of way.

The only real worry is that often Californian madness spreads like a cancer. Our rulers, none too bright, too often play follow the leader. They believe this excuses their mistakes.

There are other forms of incompetence, like NYC’s Bill de Blasio, who openly seeks to cause pain. He thinks only the “rich” go out to eat, and he has never forgiven the “rich” in the city for not voting for him. So he says he’ll begin think about reopening “next year.” Alas, de Blasio has not been a victim of the increased number of shootings in the city.

Next post: Antifa Killer’s Sister Warns, He Will Be A Martyr For Far leftists As Calls For Civil War Intensify