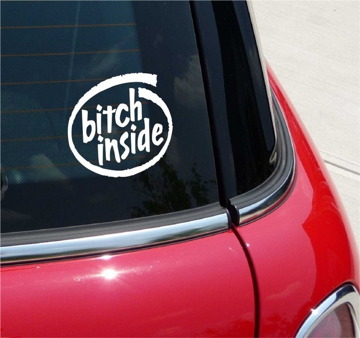 They didn’t want to turn her on but they did. I never want to turn her on but I do. After they had turned her on for awhile they grew tired of listening to her. After listening to her for even ten seconds I’m enraged by her. Somewhere along the long road to their duck hunting camp they named her “The Bitch” and turned her off. At random points on any road I drive I want to throw “The Bitch” out the window and run over her until she’s nothing but a flat black splotch on the asphalt.

“The Bitch” has her uses. She’s helped me find my way to unknown destinations and out of places where I’m hopelessly lost. It doesn’t matter. I hate the very thought of her. She’s the worst nag since Eve made Adam slap on the fig leaf and remarked on how small it was. She’s Lilith and Delilah and the “What–ever Girl.” She’s the most passive-aggressive talker since the last speech by Barack Obama. She’s “The Bitch.”

It’s not what “The Bitch” does and doesn’t do but the voice of “The Bitch” that instantly sets my teeth on fire. It’s so pale and distantly grating that it draws me into a conversation even though I’ve got nothing to say to “The Bitch” and she isn’t listening.

“In sixth tenths of a mile, turn right on Mac Graw Av-en-you.”

“In two tenths of a mile turn right on Mac Graw Av-en-you.”

And I turn left just to spite her and get about ten yards up the street when I hear her say the one thing that makes me want to strangle her with her charging cord:

Nag, nag, nag…. Short of pulling the plug nothing, but nothing, will shut “The Bitch” up. I don’t know what sort of market research came up with the voice of “The Bitch” as the optimum voice for a GPS unit, but I suspect knew what they were doing all along. They were looking for the optimum voice that would drive men out of their minds. And they succeeded. Sadists.

And don’t tell me to reset “The Bitch” to that English Accent choice. She’s just bitchier with the bright tang of British smarm smeared on top. She’s “The Brit Bitch.”

She’s “The Bitch” now and forever. No other female voice can even hope to come close to her voice. It is seared, SEARED, into my memory.

One of these days I’m going to take a very long drive into the heart of Death Valley and dump her. I’d do it today if I didn’t need her so much.

Previous post: Noted in Passing: Report from the Cat’s Go-Pro