The kingdom of heaven is spread upon the earth. But men do not see it…Split a piece of wood and I am there. Lift up the stone and you will find me there. –The Gospel of Thomas 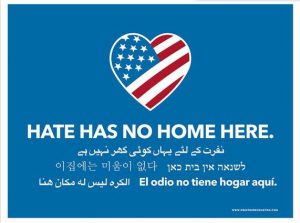 I have noticed these signs, most often in upscale neighborhoods inhabited by professionals or well-to-do retirees.  Why put up a sign like that in a peaceful, upscale, decidedly un-diverse neighborhood?  There is nothing to suggest that the neighbors are racists or bigots.  Or that hate has set up a household on their block.   So, what is going on?  Some call it virtue signaling. But it is really vice signaling.

Vice signaling is a defense mechanism, meant to displace liberal guilt. There was a moment, shortly after the 2016 election, when liberals realized that ordinary Americans had turned against them and that they had reason to do so.

Allied to the teachers’ unions, the liberals had permitted our schools to descend to Third World standards. They supported an immigration system that imported economic immobility. They welcomed a regulatory morass that gave elites jobs but that placed a stumbling block in the path of those who sought to get ahead.  They watched as factories closed and workers lost their jobs when production was sent to China while their investment portfolios grew fat. They shopped at Amazon while their local retailers went broke.   Rather than blame themselves, it was much easier to transfer the guilt to conservatives. That is how vice signaling became the language of liberal politics.

The people with their  “No Hate” signs sow more division than they do comity. It tells you that if you are not in tune with the Liberal zeitgeist, you are a hater.  They show their love by ordering a sign from Itsy, or Zazzle or Amazon to tell you how full of love they are, unlike the sinners around them  It is actually a hateful sign and people who put them in their yards are – like the Pharisees – hypocrites. 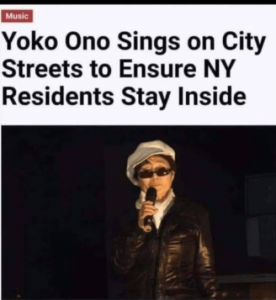 Darkness at Christmas :That every conceivable human evil may be advanced by methods of social isolation, has been this year’s “breakthrough” rediscovery, and points to its ultimate authorship, Below. In Ontario, for instance, under a simpleton premier, almost all human interaction is banned, except that of mass-market retailing. Starting on the Feast of Stephen (December 26th), familiar visitors to our households will become liable to fines of up to 100,000 Canadian dollars, and up to one year in gaol.

While such lockdowns have been shown to have no effect whatever on the transmission of viruses already widely disseminated, wherever they have been studied, they are imposed as if they were “science,” by petty, and very sleazy, politicians. In no civilized jurisdiction had they such personal authority. But they are thrilled to discover that they can get away with it; that a public systematically misinformed, and deprived of prompt, decisive legal recourse, will obey their edicts, and thereby submit to enslavement. Throughout history, those willing to be enslaved, have been enslaved.

Everybody remember where we parked. Clear right. Clear left. Hit it!

It Could Have Been So Much Worse – Experts who model large-scale disasters have long worried that a serious shock to one of the country’s essential systems—a month-long blackout, say, or a large breakdown in our fuel supply, or, yes, a pandemic—could plunge the nation into the cascading collapse known as a “hyper-disaster.” Store shelves would go bare within days. Hungry gangs would roam blacked-out streets. Tens of millions could die.

None of that happened. Yes, supply chains were strained. As always, toilet paper was a leading indicator that people were stocking up on essentials—to a fault. Some staples were in short supply. Where I live, yeast, of all things, was impossible to find. Stuck at home, everyone apparently decided to start baking bread. But suppliers and retailers adapted. When prices for toilet paper shot up, they figured out how to shift inventory once destined for office buildings over to the domestic market.

The Nashville bomber was apparently a suicide – The New Neo Snow on Pine  said:
While I’m at it, Trump has been the rock upon which practically every contemporary institution of power–and a whole host of major figures in our society as well–have foundered, have revealed themselves to be a bunch of poseurs, as Leftist ideologues, and nowhere near as benevolent, glorious, intelligent, and informed institutions and figures as they have been, and liked to be portrayed as. In fact, once you start to doubt the competence, objectivity, patriotism, dedication, and loyalty of the FBI to our Republic, to our political system, and to our Constitution (and, then, start to have creeping suspicions about other parts of our government and other major institutions), and start looking backward in time, the number of high profile cases over the last several decades that then come into question just keeps growing.

Robert E. Lee has always been part of that solution, because no Confederate has been judged more deserving of being honored as a national hero. President Dwight Eisenhower kept a photo of Lee in his office, and when a constituent wrote him a letter saying, ”I do not understand how any American can include Robert E. Lee as a person to be emulated,”  the general responded eloquently.  ”Through all his many trials, he remained selfless almost to a fault and unfailing in his faith in God. Taken altogether, he was noble as a leader and as a man, and unsullied as I read the pages of our history.”

The reason we have forgotten why Lee is worth honoring is the same reason we have forgotten why we needed him in the first place: we have lost our appreciation for old-fashioned virtues like duty and filial piety. I saw a pundit on Twitter, otherwise a pretty conservative guy, say recently: ”Robert E. Lee literally had the privilege of choosing which army he wanted to lead in the Civil War. He chose wrong.” It’s true that Lee was offered command of Union forces in April 1861, but it is a modern anachronism to assume from this that he had a choice. 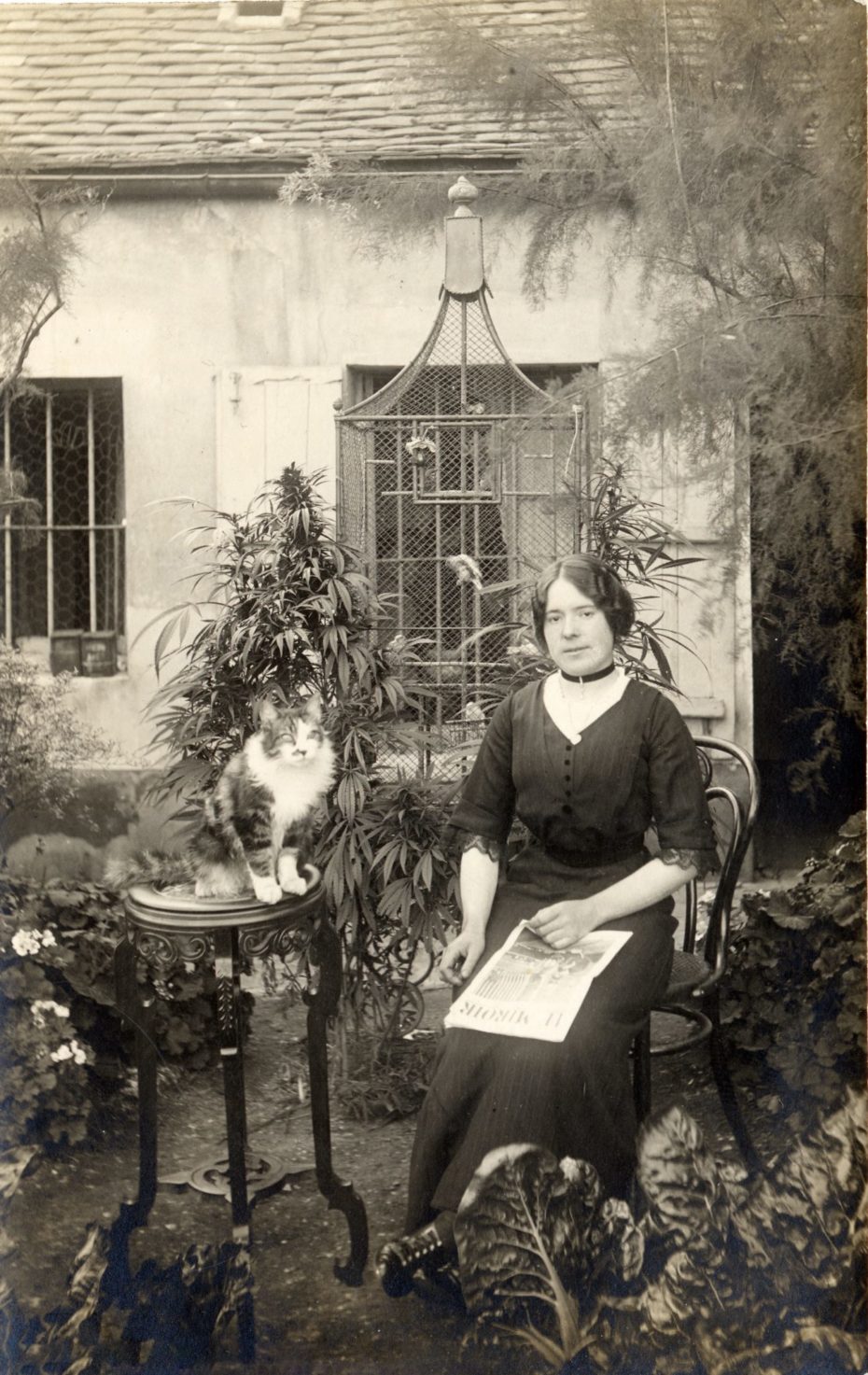 Parisian Woman and a Cat in her Cannabis Garden 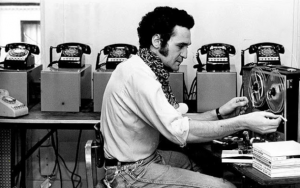 Before the Internet, there was the 1960s Dial-a-Poem Hotline Fifteen rotary telephones were set up in a room at the Architectural League on the Upper East Side, and rigged up to a bank of bulky recording devices. Wires were everywhere, and the set-up would look entirely primitive to us today, but once upon a time, this was white hot technology. There were 15 answering machines for each of the phones, which you could call from anywhere and listen to a poem at random. Sometimes it could be sound art or political speeches, comedy or music. The hotlines were changed everyday by Giorno with new selections. Stickers advertising the phone number were placed in public phone booths, in cafes, on bulletin boards and on the subways. 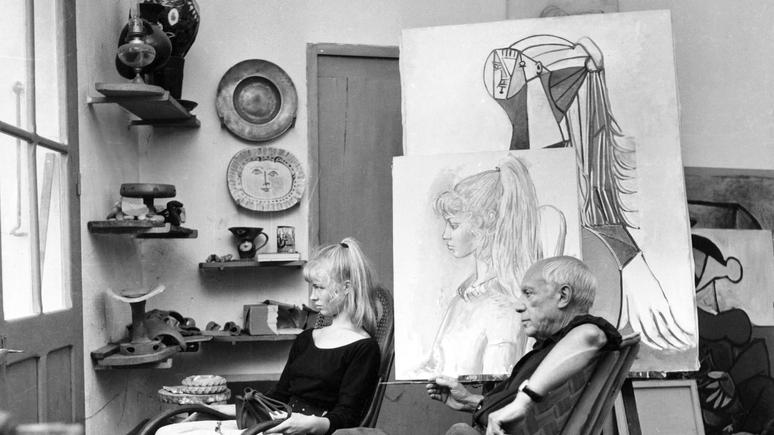 What Happened to Picasso’s Mysterious Teenage Muse? ”Once, he took me into the barn where he kept his car.  It was an old Hispano Suiza, covered in dust. It was an amazing car. He opened the door and sat on the back seat. He sat there talking about all sorts of things and told me stories. He told me that creativity was happiness and that any object can be interesting  — that they all give you ideas. But he never touched me. He knew that if he had touched me, I would be off, like a deer!” 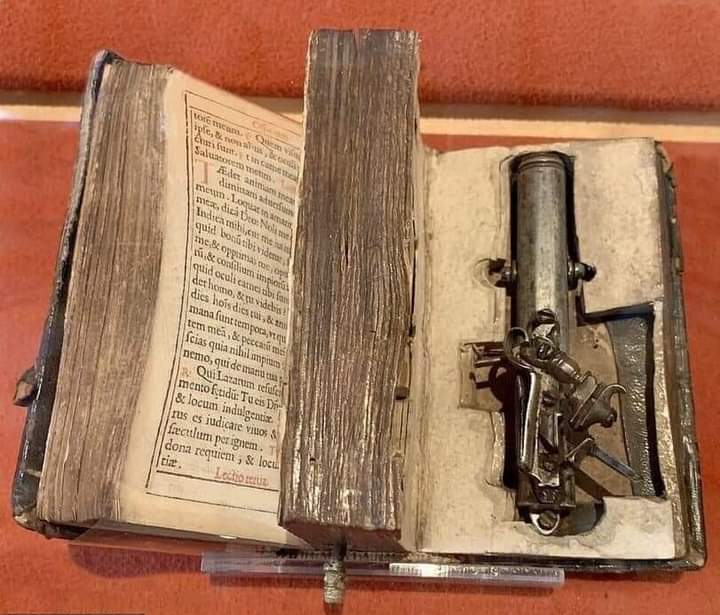 This is a Bible with a compartment for a gun filled by a gun. Made in Venice for Doge Francesco Morosini in the second half of the 17th century.

The final tally : Essays in Idleness The great majority of the world’s population is dead. Even the statisticians concede this. Counting only the last fifty thousand years, they suggest, more than 108 billion of us have been born. (More precisely, 108,760,543,790, as of 1st July 2019; presumably at midnight GMT.) Yet only seven-point-seven billion are still alive. Every week, another couple of million “pass,” as we say, using a sporting metaphor. Among the demographic experts, there is no agreement on how many remain unborn. There is also the vexed question, of how abortions are to be counted. I would think they are a “force multiplier” on the side of death, to use the language of the Pentagon. But count them dead, and a feminist may have a spittle-flecked nutter. Should we then count them as never having died? 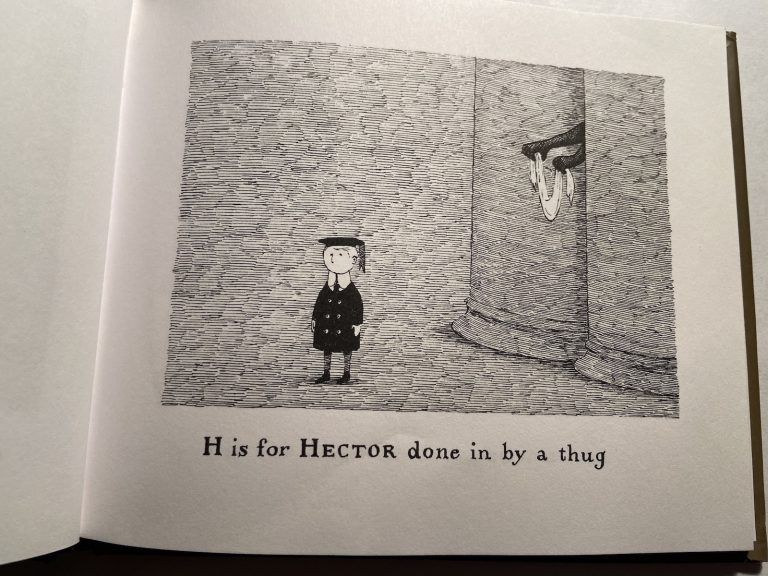 The Gashlycrumb Tinies: Edward Gorey’s Alphabet of Death – How the 26 children died is a matter of record. In 1963, American artist Edward Gorey presented The Gashlycrumb Tinies, a book of drawings and rhymes showing the young victims, each name standing for a letter of the alphabet: “A is for AMY who fell down the stairs”; “B is for BASIL assaulted by bears”. “I see no disparity between my books and everyday life,” said the artist. “I write about everyday life.” 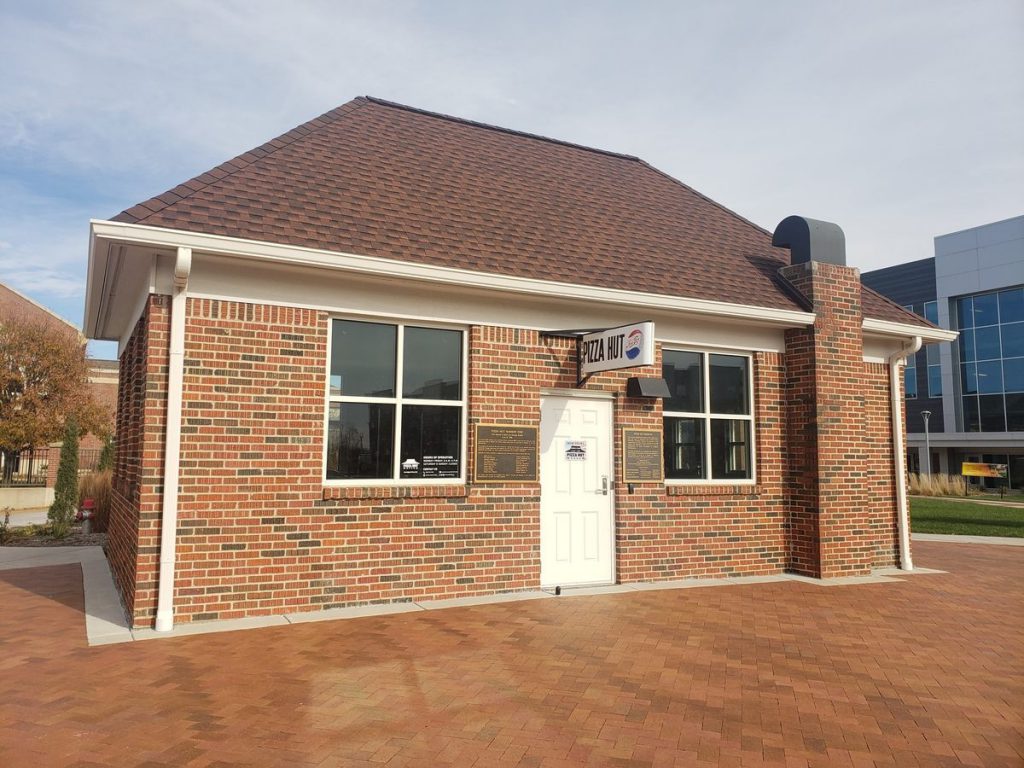 Original Pizza Hut  Wichita, Kansas –  In 1958, the Carney brothers, then WSU students, had the humble goal of opening a small pizza shop on the corner of Bluff and Kellogg Streets in Wichita. Run with the help of fellow students and family, the pizza joint was a success, leading the Carneys to open another branch in Topeka. Soon, more followed. Today, Pizza Hut can be enjoyed in more than 100 countries worldwide.

Michael Walsh’s ‘Last Stands’ Explains Why Men Go Down Fighting to the Last Breath One of the unintended consequences of the recent pandemic was it drove home how vast, wonderful, and terrifying the universe is. The politicians had nearly convinced us they were going to manage everything when events escaped control. Suddenly the disease revealed we might need bravery again. Had the coronavirus proved highly fatal we might have had to make our own Beau Geste,  cause a fuss over our own endings. 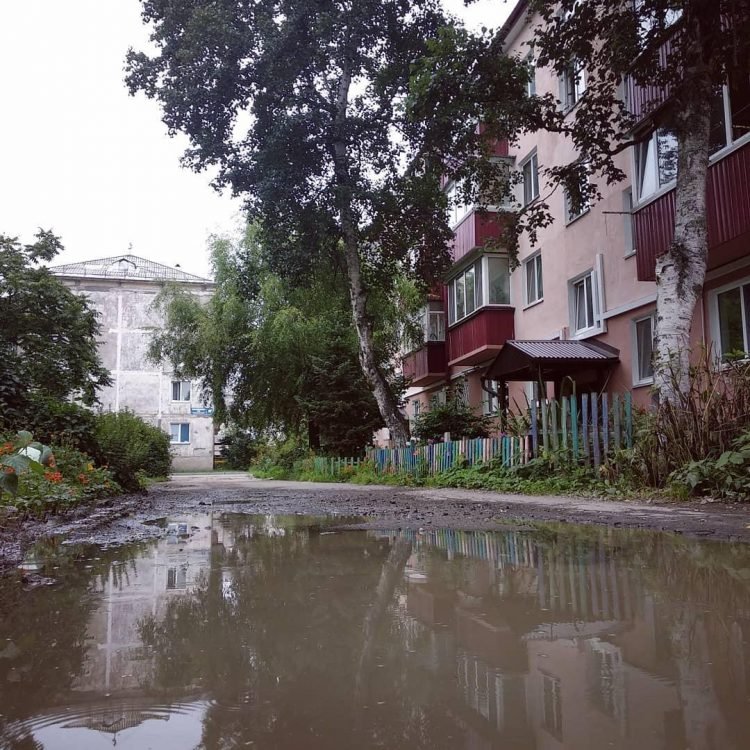 This 25-Year-Old Puddle Has Its Own Instagram Account A giant puddle in Russia’s Far East city of Yuzhno-Sakhalinsk is being described as “invincible” after it somehow survived unfixed for over a quarter of a century. It now has its own Instagram page and over 16,000 followers.

McDonald’s is testing a new sandwich in China made of Spam and crushed Oreos, topped with mayo https://t.co/8Gru9gVYWW pic.twitter.com/kbIz63oSz6

The modern world will not be punished.
It is the punishment. — Nicolás Gómez Dávila

Next post: Time in a Bottle: Dust in the Wind and the Summer of 77