Of all tyrannies, a tyranny sincerely exercised for the good of its victims may be the most oppressive. It would be better to live under robber barons than under omnipotent moral busybodies. The robber baron’s cruelty may sometimes sleep, his cupidity may at some point be satiated; but those who torment us for our own good will torment us without end for they do so with the approval of their own conscience. — CS Lewis 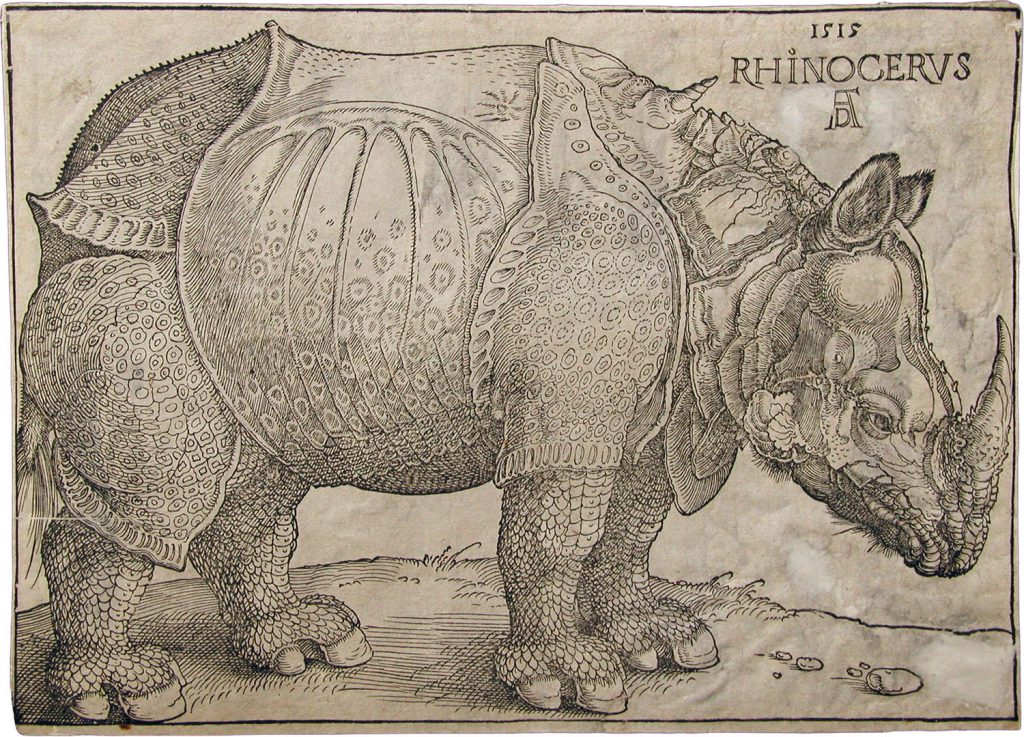 The Rhinoceros  Clara, a 2-yo domesticated female rhinoceros was sold (or maybe gifted) by Jan Albert Sichterman, director of the VOC,4 to captain Douwe Mout van der Meer. The good captain transported Clara on his ship the Knappenhof from Assam to Rotterdam, where it arrived on 22 Jul 1741. After a brief rest in Leyden, the captain’s home, he intended to display Clara throughout Europe. Van der Meer turned out to be a brilliant impessario. Using a specially built cart pulled by eight horses, he toured Clara throughout Europe and she was a sensation. Rhinomania soon swept through Europe. She was received by royalty and fed beer by commoners.5 Poems and songs were written about her. She was sketched, engraved and painted and her likeness appeared on everything from porcelain to snuff boxes to mantle clocks. French women ever wore their hair à la rhinocéros. 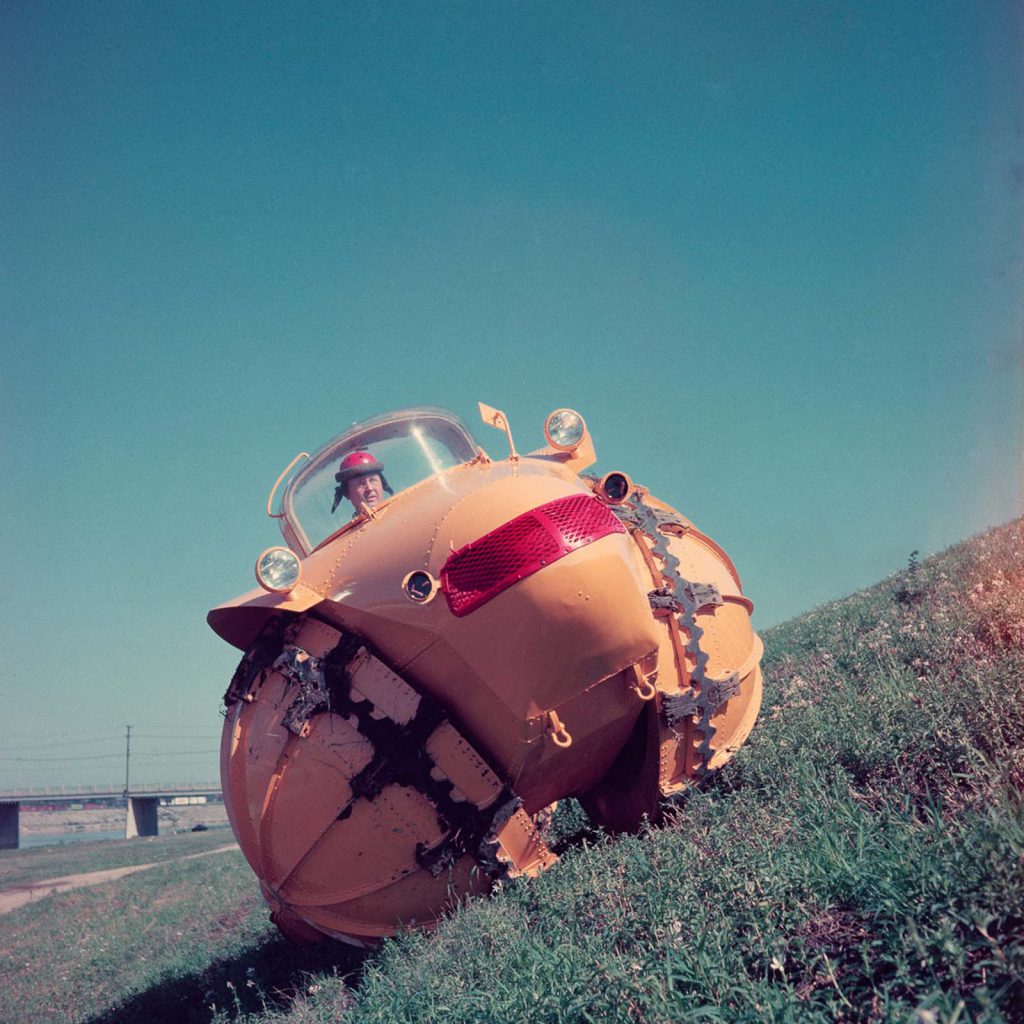 The Rhino: a bizarre experimental all-terrain vehicle, 1954    A few years later, he came up with the concept of an enormous vehicle nicknamed “The Rhino”. Defining features were its massive slanted front wheels, which had six-foot diameters and weighed 1,500 pounds each. The wheels were also hollow, which allowed the Rhino to float, meanwhile, a hydrojet propelled it forward along the water body. The odd-looking vehicle weighed five tons and could travel with ease through deep sand, mud, and water. On the highway, it reached up to 45 miles per hour, but in water, it couldn’t surpass speeds of 5 miles per hour

Haas Driver Romain Grosjean’s F1 Car Goes Up In Flames, Spears Through Barrier, Splits In Half. Grosjean Walks Away Ernest Hemingway — ‘There are only three sports: bullfighting, motor racing, and mountaineering; all the rest are merely games.’

Trial by Fire, Trial by Rain   The 1973 Indy 500. 1732h, Tuesday, May 30th, 1973. The clouds came in “low and black” and soon the downpour began. On the 133rd lap of the Indianapolis 500 starter Pat Vidan waved the red flag and ordered in the few cars that still remained on the track. Even if the storm had passed it was obvious that there wouldn’t be enough daylight left to complete the race, but by this time that didn’t matter: it had been a long, difficult month and no one wanted to be on that track for even a minute longer. Rain had delayed the race for three days and now, after only 332 miles, it was mercifully ending it. 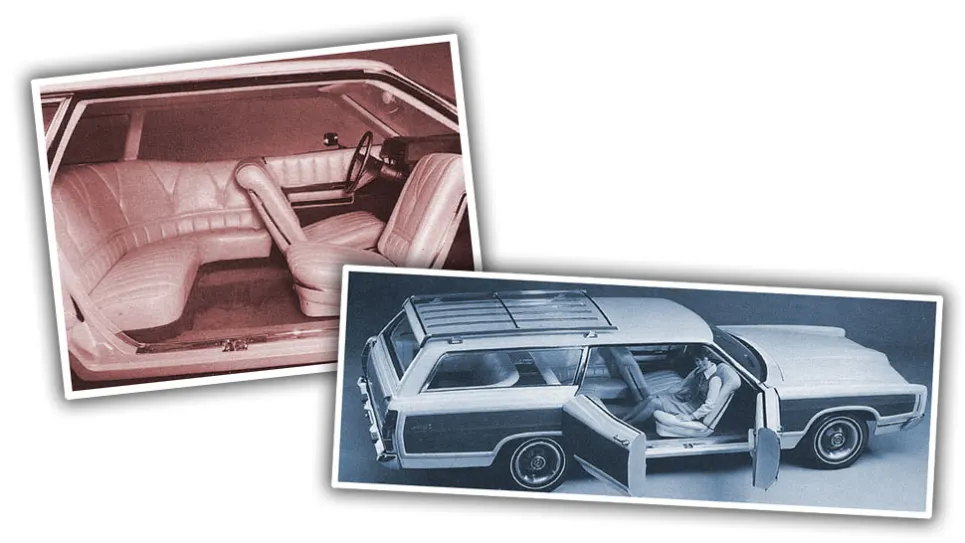 This Old Ford Concept Wagon Really Should Have Happened  The rear bench has grown into a wraparound couch that curves and follows the other side of the car, leaving a nice large open area in the middle. The passenger’s seat has become a Captain’s Chair, and can swivel to engage the seating area in the back of the car, instead of being locked down, uselessly staring out the windshield.

The Age of Cant |     Cant is the vehement public expression of concern for others, or of anger at an opinion casting doubt on some moral orthodoxy that is not, and cannot be, genuinely felt, its vehemence being a shield for insincerity and lack of confidence in the orthodox opinion. Doctor Johnson defined cant as “a whining pretension to goodness, in formal and affected terms.” Cant is contagious, and, when widespread, it creates an atmosphere in which people are afraid to call it by its name. Arguments then go by default; and if arguments go by default, ludicrous, bad, or even wicked policies result.

I think that we live in an era of cant. I do not say that it is the only such age. But it has never been, at least in my lifetime, as important as it is now to hold the right opinions and to express none of the wrong ones, if one wants to avoid vilification and to remain socially frequentable. Worse still, and even more totalitarian, is the demand for public assent to patently false or exaggerated propositions; refusal to kowtow in such circumstances becomes almost as bad a sin as uttering a forbidden view. One must join in the universal cant—or else. 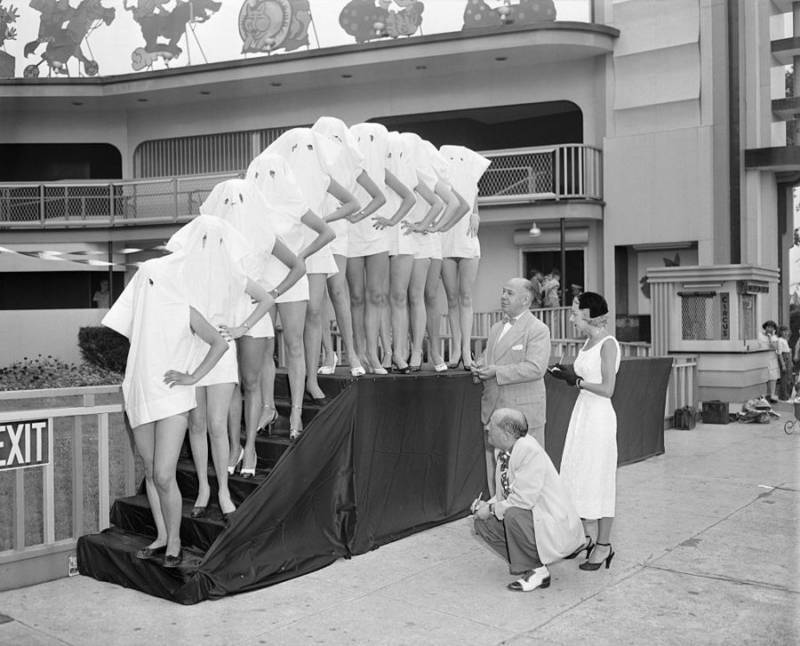 Participants in the Beautiful Leg Contest at Palisades Amusement Park, New Jersey, USA in 1951 wear pillow cases over their heads so that the judges can only judge their legs. 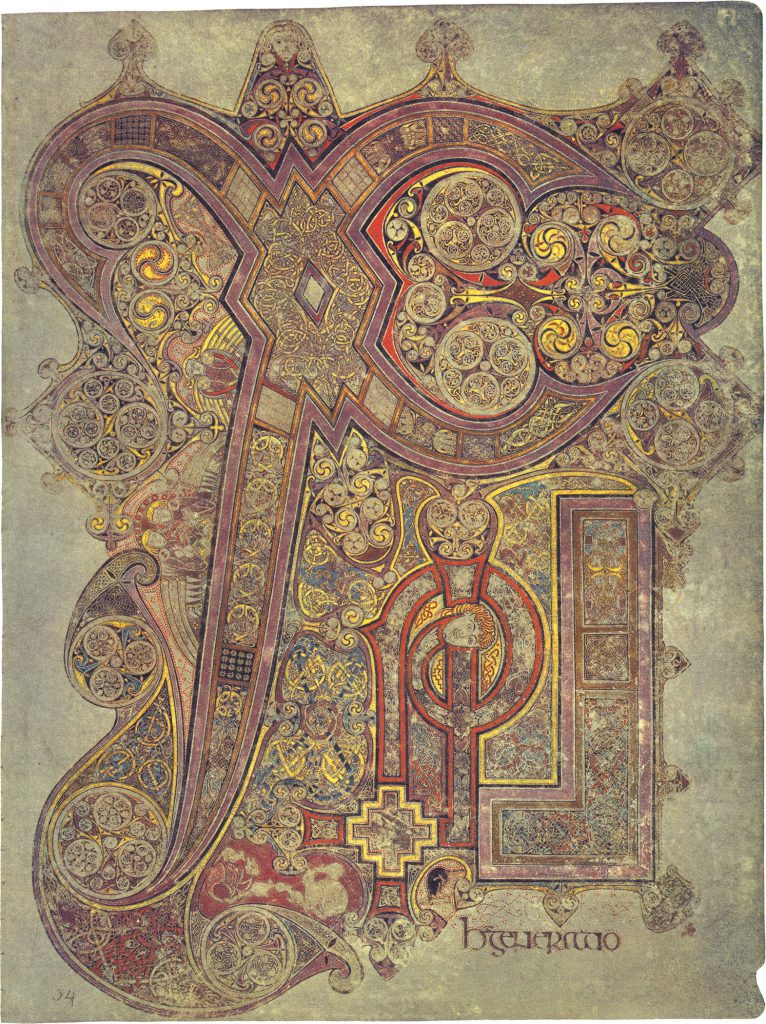 The Book of Kells  From its absolutely relentless level of illustration, decoration and illumination. Giraldus Cambrensis, the 13th century historian, described it as “…the work, not of men, but of angels,” and the author Umberto Eco, more recently and perhaps closer to the mark, described it as “the product of a cold-blooded hallucination.” The manuscript, written around 800 AD, may have been done at the monastery in Iona, Scotland, or in the Abbey of Kells, County Meath, Ireland. Or it may have been started in Iona and finished at Kells, or whatever; but by ca.1000 appears to have been in the possession of the Abbey at Kells. In 1007 The Annals of Ulster states that “the great Gospel of Columkille, the chief relic of the Western World (primh-mind iarthair domain), was wickedly stolen during the night from the western sacristy of the great stone church at Cenannas on account of its wrought shrine.”3 The manuscript was recovered “after two months and twenty nights under a sod.” 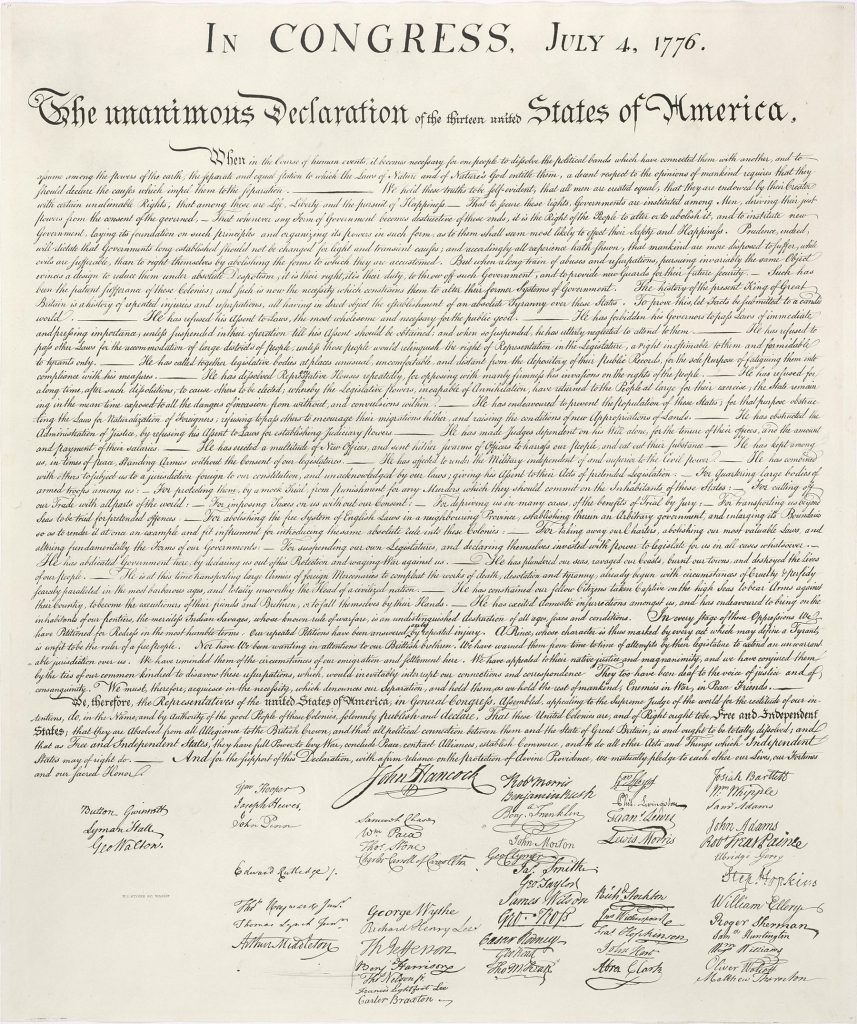 The Declaration of Independence In 1820 Stone, a Washington lithographer, supposedly copied the original using a wet-transfer method, where a sheet of dampened paper was pressed upon the original until a faint ink impression was transferred to the sheet. The process gave Stone a good outline but also irreparably damaged the original. Stone took three years to etch this copy onto a copper lithographic plate, which fortunately turned out to be remarkably accurate. The plate was purchased by the Department of State and they printed 200 official copies on vellum followed by an edition of several thousand unofficial copies:

Who says there’s no good news? Reports: Israel Assassinates “Father” Of Iranian Nuclear Bomb Program Mohsen Fakhrizadeh  Based on early reports, his car was “stopped by explosive and then he was killed by shooting.”

Gobekli Tepe – the World’s First Temple?   Located in modern Turkey, Gobekli Tepe is one of the most important archaeological sites in the world. The discovery of this stunning 10,000 year old site in the 1990s CE sent shock waves through the archaeological world and beyond, with some researchers even claiming it was the site of the biblical Garden of Eden. The many examples of sculptures and megalithic architecture which make up what is perhaps the world’s earliest temple at Gobekli Tepe predate pottery, metallurgy, the invention of writing, the wheel and the beginning of agriculture. The fact that hunter-gatherer peoples could organize the construction of such a complex site as far back as the 10th or 11th millennium BC not only revolutionizes our understanding of hunter-gatherer culture but poses a serious challenge to the conventional view of the rise of civilization. 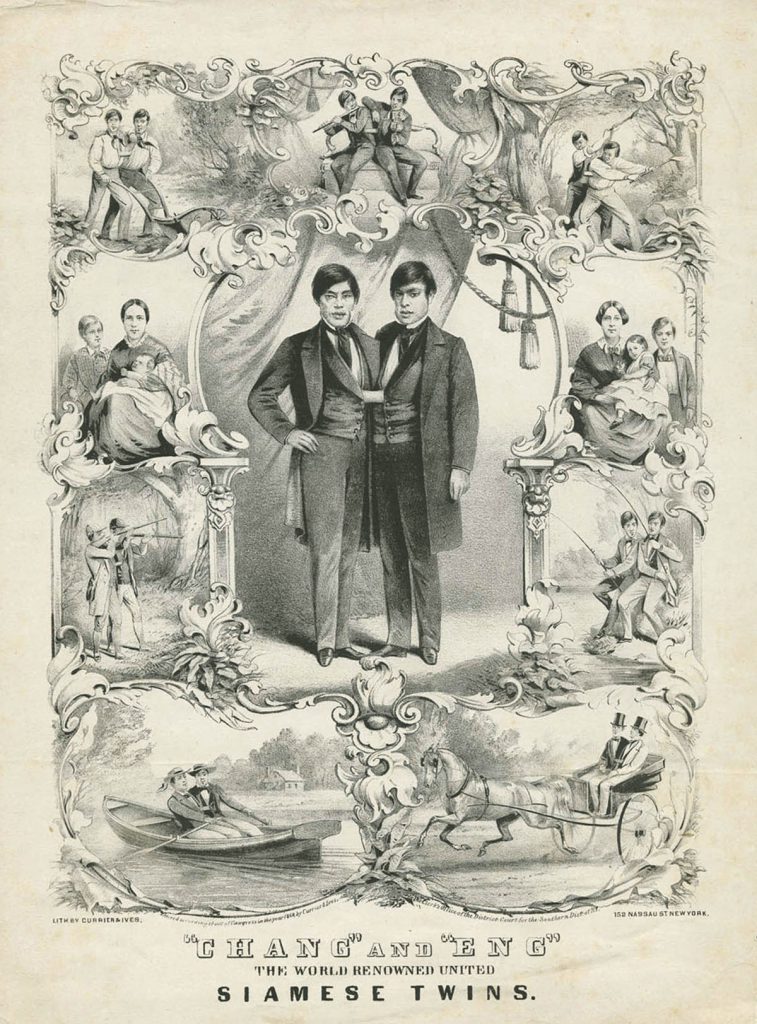 Chang and Eng  The twins became naturalized US citizens, adopting the last name Bunker and settled down in rural North Carolina. Comfortable, but unable to retire, they became gentleman farmers. In a remarkable turn of events the the twins met the Wilksboro sisters Adelaide (Addy) and Sarah Ann (Sally) Yates. Against local opposition to the “unholy alliance” the twins married the sisters on 13 Apr 1843. Within a year both Addy and Sally had a child and eventually the twins would father no less than 21 children. Of course, if two’s company and three’s a crowd than four is something else altogether. As their families grew the sisters started quarreling and eventually the twins set up seperate housholds. They would alternate between them – three days at a time – for the rest of their lives. The War nearly wiped out the twins’ fortunes and accompanied by their daughters Katherine and Nannie, they left in 1868 for a European tour, including England, Scotland, Ireland, Germany and Russia. On the trip home Chang, who had become a heavy drinker, suffered a stroke leaving him partially paralyzed. The twins would never tour again. On the night of 17 Jan 1874 Chang suffered another – this time fatal – stroke. Eng immediately recognized his own fate and died three hours later of what was variously described as “shock” or “fright.” He was quite literally scared to death.