Democrat Deer in the Headlights 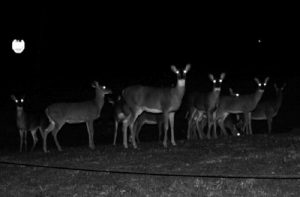 What can be going through a deer’s mind just before the deer goes through the windshield? The dazzle? Something so bright with promise that it overwhelms the flight impulse which always comes before the fight reaction?

The tendency of deer to freeze when caught in the sudden glare of an oncoming disaster is so well recognized that it has evolved into the familiar catchphrase; a phase used for any life situation in which the threat is so overwhelming and sudden that no survival reaction is possible. Instead, the animal remains rooted in place — nailed to its perch like a deer in the healights, as it were.

We now see this dreaded situation acted out daily along the Information Highway where an increasingly large number of our fellow citizens from the world delusional have assumed this dazed position on the highway of history. They seem surprisingly content to stand spot-welded to the tarmac as the glare of ruin and the promise of destruction rolls towards them, air horn suspiciously silent.

Unable to wake themselves from the dazzle of dementia, from the forlorn hope of OrangeMan gone soon, our current cohort of glare frozen furbutts are actually supporting the impeachment circus unfolding in media sideshows everywhere; supporting a process whose daily television “program” is a kabuki of cowardice; supporting the herd leaders of Congressional Bambis, if you will. This part of the herd, as a reward for their obsessive compulsion towards embracing trumphate and the corruption of the Constitution, is actually praised by the Timesian and Postoid scribblers snorting amongst them in the sty on the Hill. Throughout the history of the Republic, we’ve seen many popular delusions of the mob rise and capture the nation, but we’ve never seen the towering tsunami of madness rise this high before.

It is an unusual government that swears to preserve and protect the Constitution, and then slaps that document, perforated, on a roll and installs it in the stalls of Congressional toilets.

It is an unusual government that promotes and passes policies of failure and defeat while prating of “patriotism” to troops in Iraq, Afghanistan, and Syria, all of whom it long ago sold down the river. Yet failure and defeat seem to be what the majority in the current congress and the Nomination Clowncar desperately want. All while the deer only want to step out on the asphalt and watch this triumph of hubris and the slide towards the pit. Yes, no matter what happens to them they love the dopamine hit of trumphate so much they just going to keep on sticking the needle under their tongue on between their toes and, as all pro junkies know, “Once the needle goes in, it never comes out.”

Perhaps the answer to what goes through the deer’s mind as it stands in the beams is as simple as “a death wish.”

After all, the membership of a party that has spent many decades worshipping death — before birth and when obvious usefulness is finished — must all be more than “half in love with easeful death.” To simply wish for death all around seems to be a simple next step. The current congress and clowncar must, in turn, love the death wish of its supporters. It figures that if some of the dead can help you get elected, more dead makes your job of governing that much easier.

Satan, the original progressive, informed Milton of this principle when he said,
Here we may reign secure, and in my choyce
To reign is worth ambition though in Hell:
Better to reign in Hell, then serve in Heav’n

Of course, much of the current congress’s institutionalized Democrat death wish, and the culture of cowardice that both precedes and envelops it, is carefully camouflaged, hidden from the sight of the less-than-persuaded centrists, independents, and other Americans who might not be ready to follow the Democrats across the Styx and down into the hell of collectivism “done right this time, trust us.”

This love of death-in-life in political philosophies must always be hidden. If it were not the American collectivist party would wither to its small and wizened core. After all one must, even while taking the country down the path to defeat and ruin, pretend that one has only the very best core American values at heart. It keeps the marks and the rubes from wising up, waking up, or blinking in the glare of the headlights.

In the annals of bunkum, it is axiomatic that once you get the rubes in the tent and take their money, you’ve gotta get the plucked out of the tent in order to pack more marks in. This problem was first solved by the great American master of bunkum and bosh, P. T. Barnum at Barnum’s American Museum

At one point, Barnum noticed that people were lingering too long at his exhibits. He posted signs indicating “This Way to the Egress”. Not knowing that “Egress” was another word for “Exit”, people followed the signs to what they assumed was a fascinating exhibit…and ended up outside.

We’re seeing that clever bit of misdirection applied nationwide today where an impeachment inquiry seems to think it can become an impeachment vote, voila!, hence a trial in the Senate with a guilty verdict, and a heave-ho removal from office, with the arrest and execution of Trump shortly thereafter. All without anybody noticing and without a wave of targetted assassinations by scoped-rifle of some three thousand Democrat heads followed by “Hello, President Pence, and your national declaration of martial law.”

Isn’t it pretty to think so?

“This Way to the Egress” America. We hope you don’t notice that the door opens into the middle of the Interstate at midnight with a convoy of semis overloaded with history bearing down on you.

The headlights will keep coming down the road from the very near future and the deer will insist upon straying into them. The only question is whether or not you want to be part of the passive herd or stockpile venison for the long road back to the Republic. 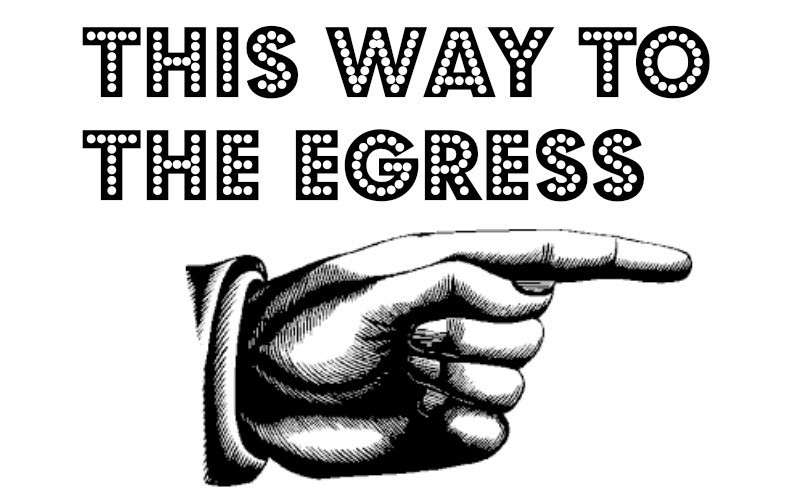 Previous post: Chico is Leaving It All On the Field