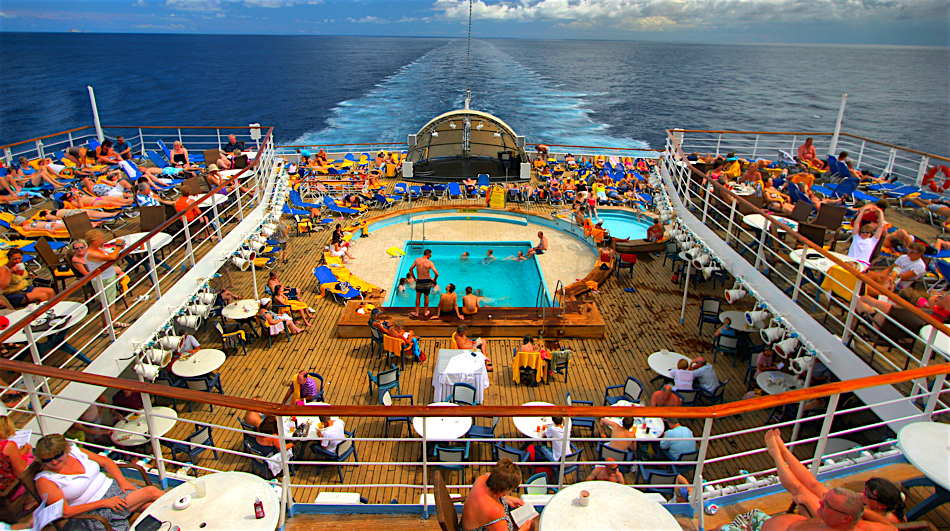 “A life on the ocean waves,
A home on the rolling deep…”
— Sea Shanty

In travel I once thought there were only three levels of tedium that overtake one between departure to destination. 1) If you go by car, your tedium level is light. You have the power to interrupt your journey at any point as well as a changing view and a task, driving, for diversion. 2) Travel by rail or bus introduces you to the second level of tedium when only scheduled stops enable you to break the journey, but the scenery remains in the middle distance as a diversion. 3) Should you go by air, your despair and terror are lessened by the knowledge that, except for extreme distances, your powerlessness and lack of view will at least last no more than a day.

The three levels of tedium. Each more or less equal to the others and each part of what you pay for wanting to indulge in the mindlessness of modern travel. But I have a fourth level and this level contains all the horrors of travel plus the horrors of actually being there. This is a level of tedium previously unexplored by me, but rumored to exist by sensible travelers who have gone and returned to tell the tale. I should have believed them but, like the fool I have always been, I had to experience it myself. It isn”t too soon to send out a warning in the hopes that there are others out there who will not be the fool I was; who will turn back before committing themselves to the constantly renewing fresh hell on the ocean waves.

But should you have a taste for tedium, should boredom be like mother”s milk and daily bread (lots of it) to you, you will be surfeited by this otherwise antiquated mode of travel. Indeed, for sheer, mind obliterating tedium; for the kind of vacancy induced only by event horizons with no events and fewer horizons; for a feeling that arises in no experience other than incarceration, there is nothing that can beat the tedium induced by that modern masterpiece of torpor, stupor and pointlessness, the Cruise Ship.

“The sane reaction to a cruise would be to throw yourself off the ship in the hopes that the props would convert you to chum before the sharks found you.”

This marvel of contemporary capitalism — a hotel that takes its patrons far out of reach of any competition — has no peer when it comes to simultaneously suspending and extending time. At sea, the ship’s clock is all there is and its pendulum pulses exceedingly slow. After a day or so, you exist in this world with either way too much time or outside of time altogether. Either way the first thing to leave your mind and judgment is your mind and judgment. This is hardly noticed by most since management has arranged for a host of activities so mindless that you will be convinced for days that you are actually in possession not only of your mind, but in your right one at that. It is only when the credit card bills arrive long after you are at home that you will realize what you have done to yourself.

The sane reaction to a cruise, once one has trapped oneself on board and has perceived exactly what sort of fresh and renewing hell one is in, would be to wait until midnight and throw yourself off the ship in the hopes that the props would convert you to chum before the sharks found you.

But since you are obviously so insane as to actually get on the cruise ship in the first place, this blissful option is closed to you. Besides, the small pattern of looping dots on the map in the main lounge that lays out your trip to nowhere gives you the hope that, when all the little red dots have changed to green, you will be released and returned to life. Since the ship only moves at a piddling four dots per day, and since the dots are many, you try not to peek too often lest despair absorb you and you hear the chimes of the starboard rail at midnight.

Still, in the brief moments of lucidity that come between meals and naps, an experience aboard a cruise ship is not without its uses. It can, properly considered, instruct you in the deeper meanings of your foolishness. Indeed, it can cause you to re-examine attitudes towards life issues you previously thought of as resolved. Capital punishment Vs. life imprisonment comes to mind at this moment.

Before being trapped aboard this bobbing monument to all that is mediocre in our culture, I had been of the firm opinion that for certain crimes only death was a just reward. After a few days of hiding from Muzak in my ironically named “Stateroom,” I began to believe that life imprisonment in such a room, even if were a bit larger, would be a finer and more just torture than a bit of nod and wink before the big sleep at the end of a needle or rope.

As an added punishment to the condemned, I would allow him the cable system I possess of four channels, two of which endlessly repeat either an infomercial for amber jewelry and the roast of a minor celebrity. The others are devoted to the X-files and Wolf Blitzer and seem, after a couple of days, completely interchangeable. A week of this begins to melt the sheathing from every nerve fiber you possess. Several decades would a hell beyond imagining. For especially heinous crimes, the remote would be removed from the cell and handed to the steward who hasn’t been tipped in ten years.

Another lesson learned when trapped on a cruise ship in the middle of the ocean is a lesson, a deep lesson, about food.

I’ ve long held that one of the sure signs of the success of modern civilization in the United States is that we have, for the first time in the history of creation, created a culture whose central problem is that is has way-t00-much food. We have a nation so drenched in food that we now have to have our legislature spend time passing laws making it illegal to sue those companies whose business is offering cheap food in massive quantities to the population. Given that the entire history of life has been a ceaseless search for adequate food, the advent of a nation that produces, winter, spring, summer and fall, way-too-much food is a signal event in evolution. But it still, alas, remains a problem for the human animal that has evolved to consume food whenever and where ever available. Since many cannot just say no to the bacon-chili cheeseburger option, the persistent supply of cheap food is a problem.

Cruise ships seem, as part of their most persistent purpose, to be designed to eliminate this problem of way-t00-much food once and for all. Never before have I been in an environment that pushes food at its end users as frantically and methodically as a cruise ship. The offers come thicker and faster than the suggestions to buy at Amazon. Your Gold Box is on your screen all day every day. You can pass but it all comes back the very next instant.

Whole herds were sacrificed for this ship. Flocks of poultry that could darken the skies have be plucked and jammed onto its ravening spits. Oceans of grain and islands of sugar cane have been hijacked into its ovens. In New Zealand, mountain sides of happy, gamboling lambs have been seared black beneath its broilers. And, of course, in the quiet, seldom visited case marked “Sugarless Desserts” lurks the knowledge that “there”s always room for Jello.”

Like the boiler rooms deep below, the buffet pulses heat night and day trying to push out and dispose of all this food. It looks to be way-too-much and on land it would be. But this ship”s passengers are doing their level best to keep up with the buffet. On any given day it is difficult to say who holds the lead, but both sides struggle to stay on top.

While somewhere long ago this ship may have had a sign that said; “Our Policy: One mammal per person per seating,” that sign has long since been purloined to decorate the refrigerator of a double-wide somewhere in Oklahoma. Indeed, a brief, very brief, glance at many in the buffet line that has no end confirms that unlimited opportunities for gluttony was one of the lines in the brochure that made them reach for their Discover cards.

More than the sea or the money, it is the food that fetches them at sea. Five, six, seven times a day. The moist pink carving boards, the sizzling griddles, the burbling steam tables, and the tiers of dessert offerings have lured them here as surely as the Sirens of old lured mariners to their deaths on the rocks of the lee shore. The only difference here is that the rocks in question are made of mashed potatoes with three kinds of gravy, and the comforting knowledge that a portable defibrillator is fully charged with a trained operator on call only three decks below.
=====
Written for a bottle at sea, somewhere off the Baja California Coast

Previous post: Noted in Passing: Smoke ’em if you got ’em