Come Out, Come Out, Wherever You Are [Bumped]

[Note: Written and published two hours before President Trump opened his press conference by saying: “But through the darkness, we can see those rays of light; we see that tunnel and at the end of that tunnel we see that light.”] 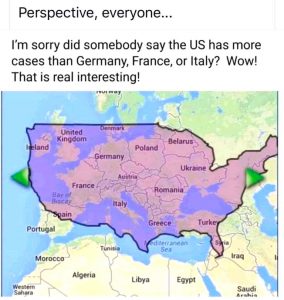 It’s time for somebody to turn on the light at the end of the tunnel because I have had it up to here with “the inside.”

I have struggled to maintain my composure and my facade of good cheer when I am working out in The Yard of the Federal/State exercise program in our self-imposed and, so far, consensual prison. But if California is letting felons out of prison so that they can spread their prison viruses and criminal behavior among us while at the same time checking the homeless into free in fancy hotels, then I need to bust out of this jail if only to stock up on some torches and pitchforks.

One of the reasons I did fairly well with magazine and book publishing is that I have always had a good feel for the mood of the American mob. This morning I can feel several hundred million Americans getting fed up to here with this current clown show.

You can feel it too, can’t you? Not your own personal disgust at the revolting developments of the last couple of months, but the disgust of us all. This game of National Hide and Seek Keep Away has gone on long enough and we are ready to hear somebody shout out, “Olly olly oxen free!” If that call doesn’t come very soon we’ll simply come out come out wherever we are in a kind of spontaneous eruption of non-violent (but easily upgraded to violent) flaunting of the law that will dwarf that of all the Civil Rights, Anti-War, Trump Rallies, and Super Bowl Sunday crowds put together.

I’m an old curmudgeon whose whole life before the national self-quarantine was, well, personal self-quarantine, but I still miss people. In this town I don’t know anybody well enough to hang out with them, but I still miss people. I miss wandering into a restaurant and I miss sitting at a bar and watching the populace of this town, from working class to white-collar, out and about and, well, happy. That’s what we had as recently as February; a nation where almost all our people were working, prospering, and — at long last — happy.

Then our happy world was carpet-bombed by a biological “event” which, weaponized or not, was born in China and carried into our land by lax vetting, loose borders, and the desire to save a couple of bucks on cheap crapola and essential medicines. Fine. We’ve known this for years and now we pay the price as all our “savings” by having our crap produced by the slaves of the Chinese Communist Party are drained away into the black hole of trillions in “stimulus” dollars.

The CCP was the Piper and now we have paid. OK, fine. Deal with the CCP later but for now we are more than paid in full. Time to file those bills and get out of the house and into the States United. It’s time to plan those picnics in the park, the grilling of hot dogs and hamburgers, the return of sports and all those small moments that make up a land of happy and prosperous people. 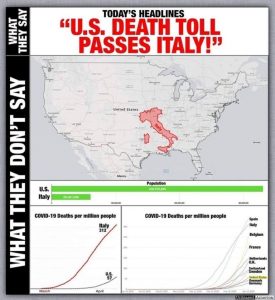 I know the risks. I know that at 73 I could quite well be taken by this CCP monster. I would hate for that to happen since the irony of this bit of writing would intensify even if I am not around to regret it. But I’ve seen and been involved in moments when the prediction of the future brings only sodden embarrassment as my mistaken visions were shown to be false shabby and stupid. I am resigned and inured to that irony. It bothers me not one whit — although dying from the Commie Flu would. That said I also acknowledge that we are all hostages to fortune in every instant from our fortunate birth to our unfortunate demise.

That said I would just, on the day of my supposed death, be just part of a statistic although I would be a death I would not celebrate. I might be taken off but I wouldn’t want to leave. I would still want to be around, once more, people. Not anyone specific mind you but just the normal shoulder brushing, the “Excuse me. Thank you.” of gatherings of crowds or choirs or congregations.

I’ve had it with the inside.

I need to go outside.

I need to go outside with everybody else.

I need it and you need it whether you know it or not.

I’m the last person on earth to admire Barbra Streisand, but on one thing we agree, “People. People who need people…”

The great part of being in self-quarantine is that you don’t have to look your best.

The great thing about breaking out of self-quarantine is you do have to look your best.

“Come out, come out, wherever you are….”