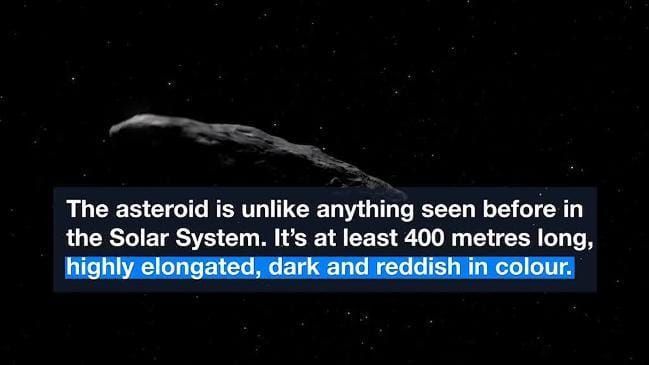 It’s appropriate that Oumuamua, the first “starship” sent to our system by some alien race, arrives in the form of a turd. It’s an important “holy relic” for the large cult of humans that seem to believe that intelligent life abounds in the universe and regularly sends various pie plates and cigars and turds to the Earth or through the Solar System; flying objects that never seem to identify themselves via satellite radio and HD television.

Avi Loeb, the chair of Harvard’s astronomy department, co-wrote a paper (with a Harvard postdoctoral fellow, Shmuel Bialy) that examined ‘Oumuamua’s “peculiar acceleration” and suggested that the object “may be a fully operational probe sent intentionally to Earth’s vicinity by an alien civilization.” Loeb has long been interested in the search for extraterrestrial life, and he recently made further headlines by suggesting that we might communicate with the civilization that sent the probe. “If these beings are peaceful, we could learn a lot from them,” he told Der Spiegel. About the Mysterious Interstellar Object ‘Oumuamua

Photographs of Oumuamua and thousands of other objects either do not exist, witness the “artist’s concept above,” or somehow dodge the automatic focal point in photo after photo. Take them all and all and add in this  latest masturbatory fantasy and I’d have to say, “Close but no cigar.” You can go right on believing that there have to be (Dammint, there just have to be..) billions and billions of planets with intelligent life in the universe, but until you find proof of planet number two there is still only one that we know — or at least suspect — has intelligent life. That would be this one.

Anthony Brode’s still got the best UFO explanation to mollify both sides in this silly story:

I accept the existence of saucers,
I concede there’s a case
To be made for believing that something’s achieving
the conquest of space;

I find it completely convincing
Whenever I hear
That creatures from Venus were recently seen
As a spaceship drew near:

And yet there’s a problem remaining
That baffles me still.
I’m not disagreeing that some super being
Can wander at will

From one universe to another-
But if it be thus why on earth (so to speak)
Should he bother to seek
Any contact with us?”

Next post: There’s Many a Slip Twist the Talon and the…. whoops!… not so fast.

Previous post: I Likes Me Some Trains by ghostsniper