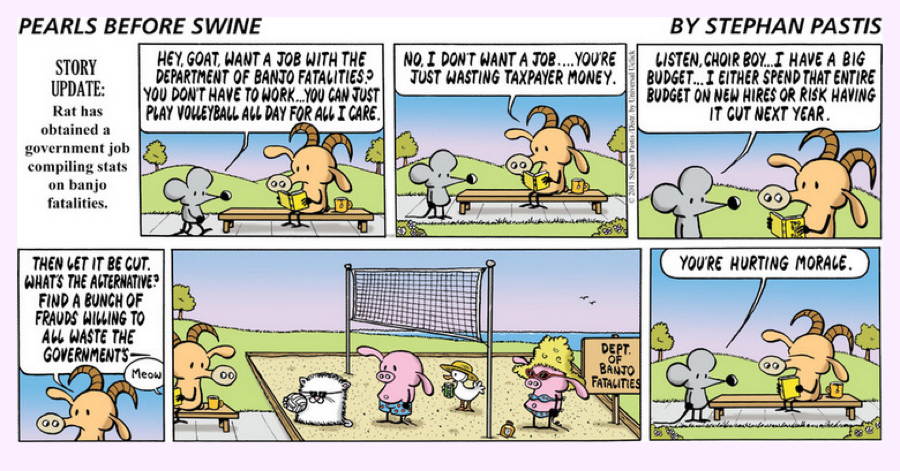 And how do we know this plan has teeth? Because the FedWorkers are afraid. Very afraid.

The American Federation of Government Employees, the largest union representing federal workers, promptly assailed the plan as a “scheme to gut federal services,” in part by targeting domestic programs that have long been unpopular with conservatives.

“There’s little reason to believe this reorganization plan is anything more than a scheme to eliminate essential programs and public-service jobs, reward or punish political appointees depending on their allegiance to the White House, and privatize government programs to reward political donors,” AFGE President J. David Cox Sr. said in a statement. What Does Trump’s Proposed Government Reorganization Portend? – Nonprofit Quarterly

THE SYNOPSIS COURTESY OF WICTOR:

THIS explains the foam -spewing savagery of the Democrats.

Full PDF, suitable for viewing and framing,   CAN BE FOUND HERE.

And now a little bedtime story:

Once upon a time, the government had a vast scrap yard in the middle of a desert.

Congress said, “Someone may steal from it at night.”  So they created a night watchman position and hired a person for the job.

Then Congress said, “How does the watchman do his job without instruction?”

So they created a planning department and hired two people, one person to write the instructions and one person to do time studies.

Then Congress said, “How will we know the night watchman is doing the tasks correctly?” So they created a Quality Control department and hired two people, one to do the studies and one to write the reports.

Then Congress said, “How are these people going to get paid?” So They created the following positions, a timekeeper, and a payroll officer, then hired two people.

Then Congress said, “We have had this command in operation for one Year and we are $18,000 over budget, we must cutback overall cost.”  So they laid off the night watchman.