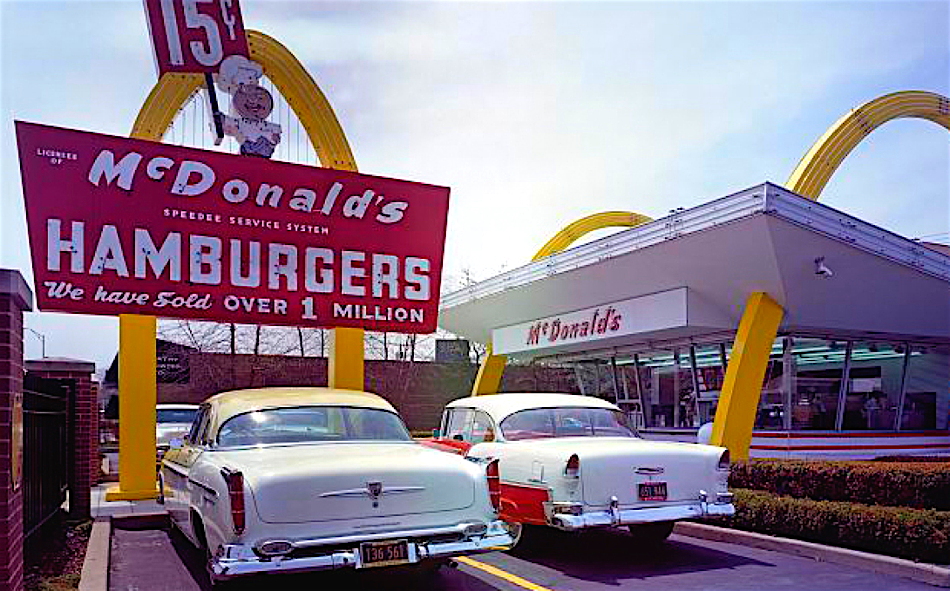 In 1970 at the age of 15 my first “real” job was working at the only McDonalds in the whole county.

To this day I remember all the prices and how to create all of the products. I’m 62 now, do the math. I could step into that old memory right now and run the full clinic, just like back then.

Day 1: I started “dressing buns”, that is, applying mustard and ketchup and pickles to the hamburger buns and from there, every 6 weeks, I rotated to another department, french fries, grill, milk shakes, etc., and after I had mastered every one of them I reached the honorable and greatly sought position of working on the counter, taking orders, using the cash register. WOW! It was not until AFTER I learned the entire system was I allowed to step right up front and represent the whole company to the public at large. (now, they stick the ugliest and stupidest people on the counter and just taking your order, with every convenience in the world, is almost more than they can muster – true genetic defects – individual and corporate)

Yep, each order – and there were hundreds each day, was written down in detail in little “ticket books” and get this, less than 60 seconds later the customer received their HOT order. The cash register was the old skool type where you had to type in the prices of each item and then hit the “Total” button that then printed a small receipt. No colorful pictures on the screen, no automated anything, all of it done by hand, the long way, but very fast and very efficient. 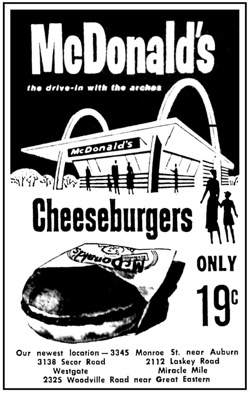 There were no bells and whistles in that menu, just down and durty and fast! and cheap! A poor person could go to McD’s and get 5 hamburgers and with 4% sales tax added actually get change back from their dollar — and they had TV commercials touting that. Five members of a family could eat a hamburger for less than a dollar. Did such a thing ever exist? Really? Yes, I was there.

Now, some might balk at the “plain-ness” of a simple hamburger and say their kids would never be satisfied. In 1970 we rarely ever ate at McDonald’s, in fact, we almost never ate out at all. I never even SEEN a McDonalds until we moved to Florida in 1966 and even then it was 2 years before my dad took us all there for a supper one evening. We thought we were at Disney World! Eating at McDonald’s! Whoa!

In 1970 there were NO females working at McDonald’s.

Each shift had 2 full grown men in their 40’s or 50’s working as managers and they had hawk eyes on all sides of their heads, they seen it all. Every employee wore the exact same uniform every single day and was responsible for keeping them clean and ironed. White short sleeve button down shirt, black straight legged pants, black belt, black laced shoes, white apron, white paper head gear. No exceptions, ever. Appearance was everything and if you dropped the ball in anything you got the boot immediately.

For the first month, during 1/2 hour lunch breaks, every new employee was in the managers very small office in the rear viewing training films. Employees paid half price for lunch while working and nobody was allowed to drink anything while working.

There was no drive through of course and there were only 8 wall mounted stools along one side of the place where customers could eat and look through the “wall of glass” and see the food being prepared, by professionals. There were no tables any where, take out service only.

And this place was THE hotspot in Lee County, Florida on the weekends. Yeah, I said Lee. As in General Robert E Lee the county’s name sake. All the hot cars slunk through the parking lot, making the circuit. There was a drive-in restaurant named Jerry’s down the way on highway 41 and back and forth the cars roamed, from Jerry’s to McDs, over an over all night long. George Odells 67 Goat with a 389 and tri-power and a full race cam, Nicky Swartz’s 69 orange Camaro SS with a “Hooker Headers” decal across the rear spoiler, John Hesslers giant 396 Chevelle SS, Pancho Wilson’s 68 Cougar Eliminator, Ken Applebees red 69 Mustang Mach 1 with a shaker scoop, and on and on.

And the accompanying cheerleaders from Ft Myers High School and their awesome cheerleader legs and all-over tans. Yes sir, McDonald’s was THE place to be and the view was the best when you worked on the counter and you did that only after you mastered the whole enchilada. 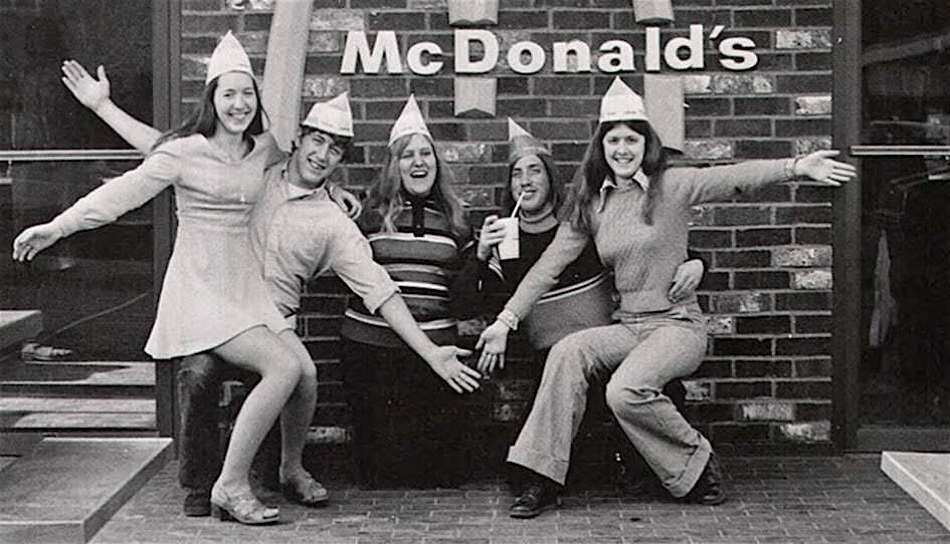 Amazingly, very few people got fired from McDonald’s, everybody was glad to have the opportunity to work. Most that were in my age group simply moved on eventually. Me? After almost year at $1.15 an hour, I graduated from 2 different schools a couple weeks before my 17th birthday and received a job offer from the largest architectural firm in the county so I quit. My new job paid $1.45 to start.

I’ll never forget my time at McDonald’s and believe it was fundamental in forming the mindset to take on the lifelong journey of employment. The other side of this story was that 15 year olds in 1970 were raised completely different than they are today so the things I described above are in keeping with the time. Yes, things were better back then, I know it, cause I was there. No, it was not peaches and cream for everybody but it isn’t that way now either, and never will be.

In 1970 I believe there was still a strong sense of truth, honesty, and an attitude of hard work for reasonable pay, kindness and courtesy to others and a binding bond among extended family members. There was the belief that if you played the game of life in this template good things will come to you in time and with effort. Mom’s stayed at home, kids went to school, and dad went to work. Evenings were spent mainly at home and weekends were visits to and from family and friends and during the week kids did homework and rode bikes and after they went to bed at 8pm mom and dad watched Perry Mason and Johnny Carson on the black and white TV with curved screen – the only TV in the house. And the only time you ever seen a tattoo was at Thanksgiving when you asked the great uncle the navy vet to pull his shirtsleeve up so you could see the blurred out naked lady’s titties on his upper bicep, he would flex it and make her “dance” and all us boys screamed with laughter and my mom chastised him once again and he chuckled.

By ghostsniper in Well, perhaps not all the voters…. – American Digest

Next post: Long Read of the Week: Undoing the Dis-Education of Millennials By Adam J. MacLeod