I seek to trace the novel features under which despotism may appear in the world. The first thing that strikes the observation is an innumerable multitude of men, all equal and alike, incessantly endeavoring to procure the petty and paltry pleasures with which they glut their lives. Each of them, living apart, is as a stranger to the fate of all the rest; his children and his private friends constitute to him the whole of mankind. As for the rest of his fellow citizens, he is close to them, but he does not see them; he touches them, but he does not feel them; he exists only in himself and for himself alone; and if his kindred still remain to him, he may be said at any rate to have lost his country. 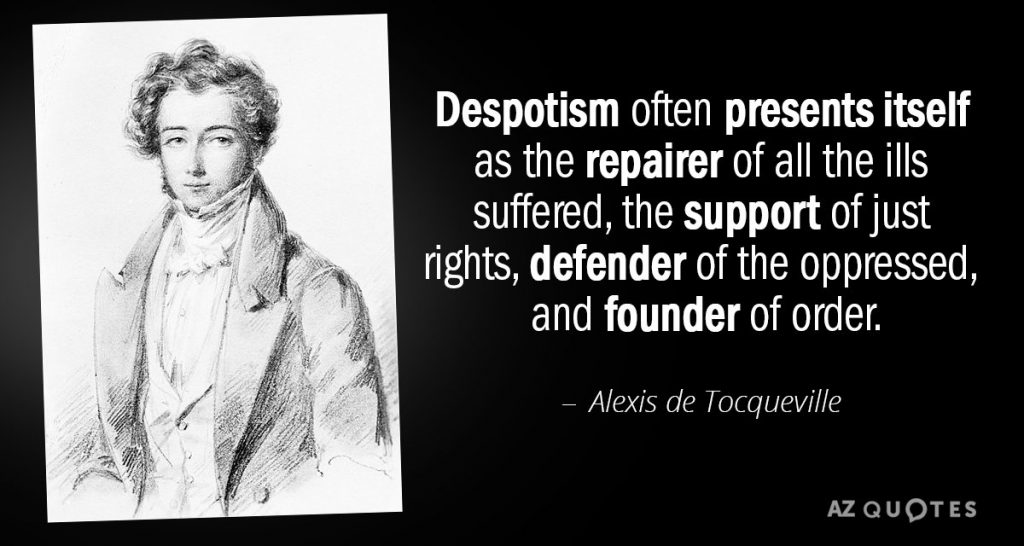 Above this race of men stands an immense and tutelary power, which takes upon itself alone to secure their gratifications and to watch over their fate. That power is absolute, minute, regular, provident, and mild. It would be like the authority of a parent if, like that authority, its object was to prepare men for manhood; but it seeks, on the contrary, to keep them in perpetual childhood: it is well content that the people should rejoice, provided they think of nothing but rejoicing. For their happiness, such a government willingly labors, but it chooses to be the sole agent and the only arbiter of that happiness; it provides for their security, foresees and supplies their necessities, facilitates their pleasures, manages their principal concerns, directs their industry, regulates the descent of property, and subdivides their inheritances: what remains, but to spare them all the care of thinking and all the trouble of living?

Thus it every day renders the exercise of the free agency of man less useful and less frequent; it circumscribes the will within a narrower range and gradually robs a man of all the uses of himself. The principle of equality has prepared men for these things; it has predisposed men to endure them and often to look on them as benefits.

After having thus successively taken each member of the community in its powerful grasp and fashioned him at will, the supreme power then extends its arm over the whole community. It covers the surface of society with a network of small complicated rules, minute and uniform, through which the most original minds and the most energetic characters cannot penetrate, to rise above the crowd. The will of man is not shattered, but softened, bent, and guided; men are seldom forced by it to act, but they are constantly restrained from acting. Such a power does not destroy, but it prevents existence; it does not tyrannize, but it compresses, enervates, extinguishes, and stupefies a people, till each nation is reduced to nothing better than a flock of timid and industrious animals, of which the government is the shepherd.

I have always thought that servitude of the regular, quiet, and gentle kind which I have just described might be combined more easily than is commonly believed with some of the outward forms of freedom, and that it might even establish itself under the wing of the sovereignty of the people.

Next post: SITE NOTES: Everything Old Is New Again