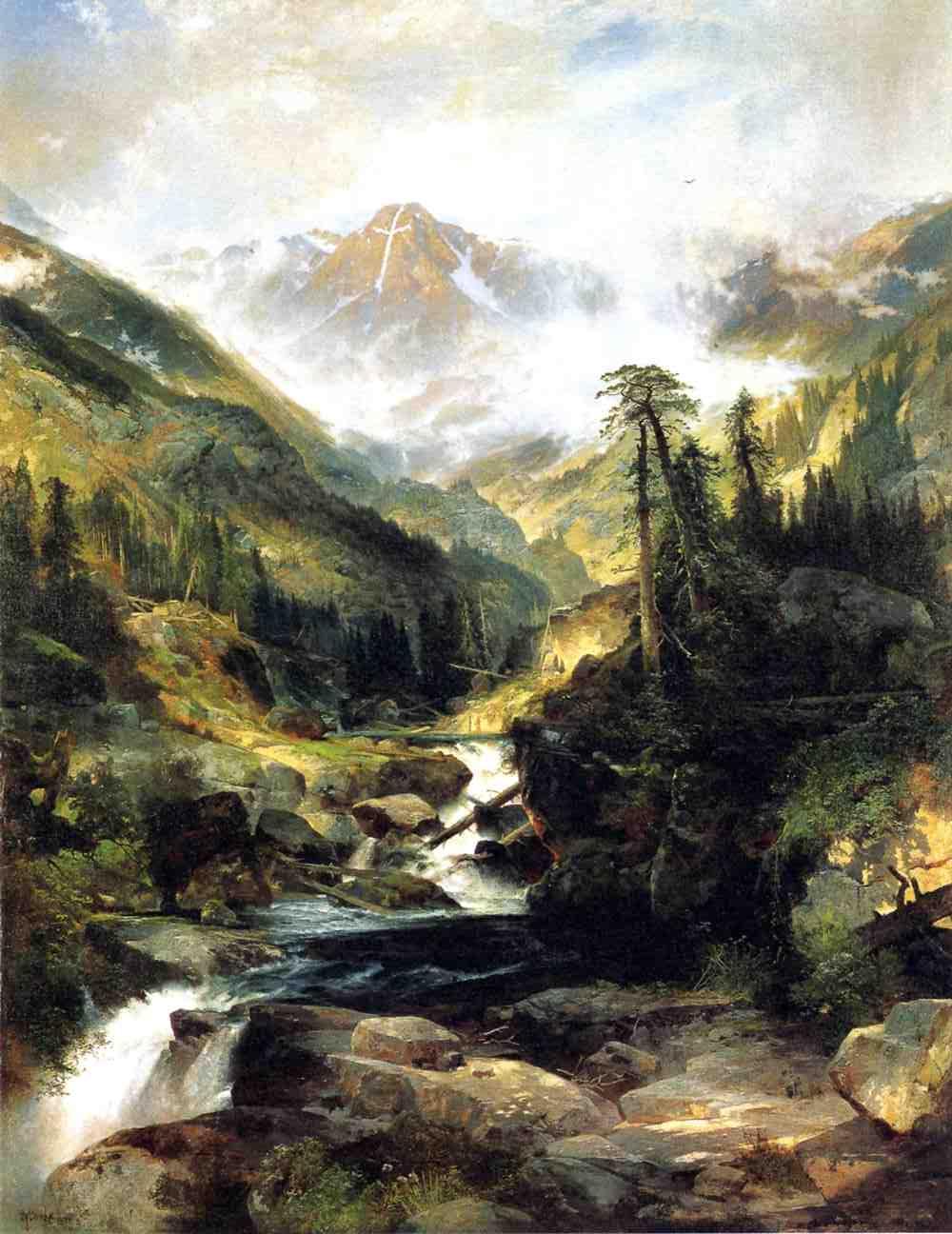 The Mountain of the Holy Cross

The Interface
–for my father, Albert John Van der Leun

1.
The empty rituals and dusty opulence
of the nightmare’s obvious ending dwindle,
and the sounds of departing automobiles
fade into the thrum beyond the cul-de-sac.
Inside the house, my mother sits quietly,
surrounded by the plates of finger food
that everybody brought and no one ate,
and wonders if she should begin to take
his clothes from the closet, call the Goodwill.
Some blocks away, the Unitarian minister
hangs his vestments on a peg,

and goes to lunch.

I drive the Skyway to the town named Paradise,
park his car at the canyon’s rim, and sit awhile
in the hot silence of the afternoon looking out
at the far Sierras where, in June, the winter lingers.
On the seat beside me, a well-taped cardboard cube
contains what remains of my father. I step out
and, taking the cube under my arm, begin to climb
down the canyon’s lava wall to the stream below.
The going is slow, but we get to the bottom by and by
and sitting on some moss, we rest awhile, the cube and I,
beside the snow-chilled stream.

The place we have come to is where the pines lean out
from the rounded boulders lodged above the stream;
where what the stream saves builds up in the backwater,
making in the mounds of matter an inventory of the year:
Rusted tins slumped under the fallen sighs of weeds,
diminishing echoes of the swallows’ chevroned wings,
laughs buoyed in the hollow belly of stunted trees,
gears, tires, the bones of birds, brilliant pebbles,
rasping windwhish of leaf fall crushed to dust,
the thunk of bone on bark, the thud of earth on wood,
the silence of soft ash sifted onto slow chill waters.

And in such silence, he fades forever.

2.
The stream, its waters revolving round
through river, ocean, clouds, and rain,
bears away the hands and eyes,
but still the memory remains,
answering, in pantomime, the questions never asked:

Are these reflections but the world without,
carried on but never borne onward, westward,
towards sunlight glazed on sea’s thigh?

Or are such frail forms shaped upon the water
all the things that are, and we above immersed in air
the forms that fade, only the mere mirrors of the stream?

Is this life all that is and, once life lost,
the end of all that was, with nothing
left to be, with no pine wind to taste,
nor sun to dapple mind with dream?
Is All that Is but ash dissolving,
our lives mere rain in circles falling?

Or are we yet the center of such circles?
Is our fall a rise beyond the shawl of night,
where all shall shine contained within
that single soul, that heart of stars;
that space where sun and water meet,
that golden hand whose wounded palm
once we have shimmered into sunlight,
still remains held out forever
and ever open even in the coldest light of day.