One Moment in Time: The Winter Solstice Seen from Newgrange

” And the light shineth in darkness; and the darkness comprehended it not.”— John 1:5″

Deep inside the world’s oldest known building, every year, for only as much as 17 minutes, the sun — at the exact moment of the winter solstice — shines directly down a long corridor of stone and illuminates the inner chamber at Newgrange.

Newgrange was built 1,000 years before Stonehenge and also predates the pyramids by more than 500 years.

Lost and forgotten along with the civilization that built it, the site was been rediscovered in 1699. Excavation began in the late 1800s and continued in fits and starts, until it was undertaken in earnest in 1962. It was completed in 1975.

Seen as a tomb, the function of Newgrange in regards to the solstice wasn’t known until 1967 — and then by happenstance acting on a hunch. It was in December of 1967 that the astronomical alignment was witnessed and understood:

Michael O’Kelly drove from his home in Cork to Newgrange. Before the sun came up he was at the tomb, ready to test his theory.

‘I was there entirely alone. Not a soul stood even on the road below. When I came into the tomb I knew there was a possibility of seeing the sunrise because the sky had been clear during the morning.’

He was, however, quite unprepared for what followed. As the first rays of the sun appeared above the ridge on the far bank of the River Boyne, a bright shaft of orange light struck directly through the roofbox into the heart of the tomb.

‘I was literally astounded. The light began as a thin pencil and widened to a band of about 6 in. There was so much light reflected from the floor that I could walk around inside without a lamp and avoid bumping off the stones. It was so bright I could see the roof 20ft above me.

‘I expected to hear a voice, or perhaps feel a cold hand resting on my shoulder, but there was silence. And then, after a few minutes, the shaft of light narrowed as the sun appeared to pass westward across the slit, and total darkness came once more.’ 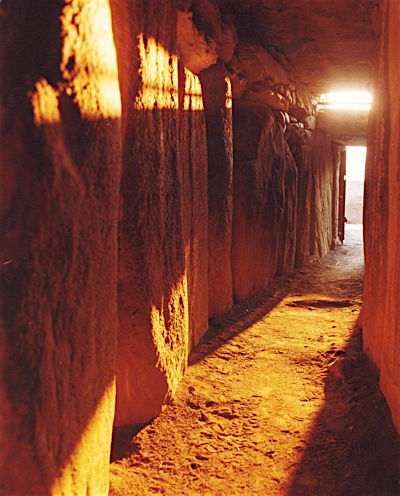 Since that time, people from all over the world have made the pilgrimage to Newgrange to bear witness to this ancient ritual begun over 5,000 years ago and only brought back into the light for the last 40.

The unknown makers built well. And they built for a very long time:

Five thousand years ago, the people who farmed in the lush pastures of the Boyne Valley hauled 200,000 tons of stone from the river bank a mile away and began to build Newgrange. At the foot of the mound, they set ninety-seven massive kerbstones and carved many of them with intricate patterns. Inside, with 450 slabs, they built a passage leading to a vaulted tomb, and placed a shallow basin of golden stone in each of its three side chambers.

Like so much else from the Age of Myth the “why” of it all at Newgrange will never be known. The people who took 20 years to move 200,000 tons of rock left us no clues beyond the spiraling runes cut into the rock. Like all the mysteries that emerge from time with no footnotes, it is left to us to make what meaning we can from them. But perhaps this one monument from the Age of Myth gives us, every year, one small hint.

No matter what time and the universe can throw at us, we still go on. To remind ourselves that we have and shall endure and prevail, we still mark our small planet’s turn around our home star. We mark it with ceremonies every year when, at this moment in time, the sun begins to rise higher to warm us again in our small patch of heaven. And we are still here to bear witness, no matter how shrill the Acolytes of Zero, to the mystery and the gift. We’re a tough race and a rough species. It will take more than a few degrees centigrade, one way or another, to finish us.

The light of the solstice pierces to the heart of the tomb at Newgrange, and then, soon after, the Light of World arrives. Two moments that remind us of the many manifest miracles of God. Reminders that no winter is without end and that The Gift is given to us again. If we can but receive it.

Next post: The Creche by the Side of the Road