Thoughts from the Beverage Aisle [Bumped] 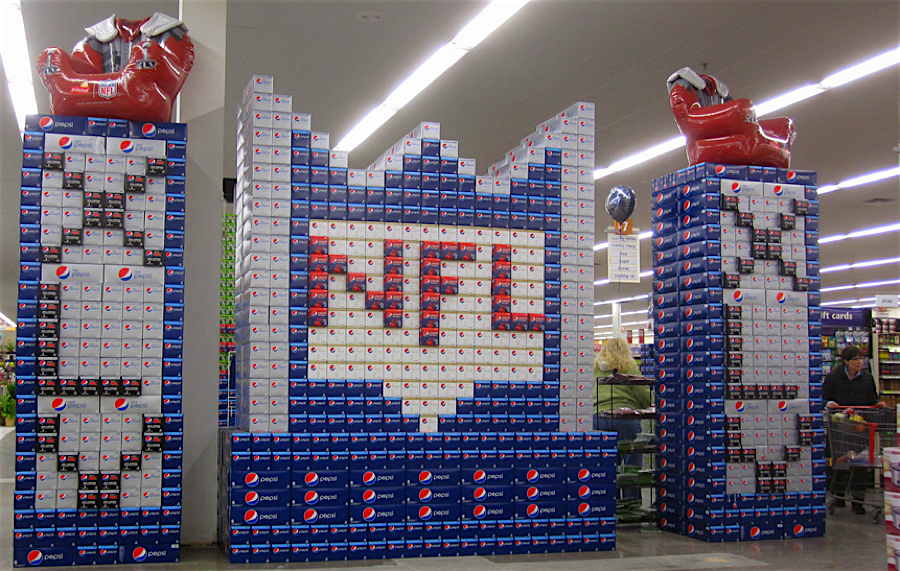 Unlike women men don’t really shop, they resupply. This afternoon I had to go to the local Safeway to resupply my beverage bin. As a man of some years living alone my beverage needs are slim but mandatory. Out of beer? Resupply! Low on tonic for the gin? Resupply! Out of Pepsi? Buy the world a Coke!

And so there I was pushing the sports-car model of shopping carts down the beverage aisle of the store ready to plunk down my hard-earned debit card in return for a selection of tasty liquids to cool down in my refrigerated storage unit.

As I strolled down the aisle taking in the immense amounts of choices one has in beers, mixers, and soft-drinks these days, I noted that a very large number of them were marketed like this:

Yes indeed. A big and obvious “NFL LOGO” was slapped on many different items in the beverage aisle. At the time this particular Cosmodemonic Globalist Beverage Behemoth paid big bucks to the NFL, the NFL logo was supposed to signal manliness, winning, sports as a pure pastime, and good solid American values. The NFL logo was, at great expense, meant to communicate to the American consumer that the product it was on respected the solid American values.

My thought as I glanced across these items sporting the NFL logo today was, “Not one red cent am I spending on any product that sports (so to speak) that logo. No. Just no.”

It was a pure spontaneous thought in that I did not think to think it. It just appeared in my mind. Adamantine.

And I moved on down the aisle and bought some beer, mixers, and soda that did not have the NFL logos.

“Take that!,” right? Yeah, sure. My own little private boycott started spontaneously in my own little skull. So what?

In my little one-man world I can’t spend all that much on beverages. Even at the height of summer I doubt if I spend $20 a month on beverages from the store. It’s just me, see.

But then I remember the multiplication tables and the fact that yesterday some 63 million Americans said “Fuck the NFL.”

Suddenly the paying of vast sums to the NFL to place on their products looks like a very bad deal for the Cosmodemonic Globalist Beverage Behemoth.

Is it? Well it seems that the NFL is spinning and lying as fast as they can:    NFL sponsors unconcerned about national anthem protests: Official

The NFL’s top corporate sponsors haven’t expressed any concern about the unprecedented wave of player national anthem protests this weekend, a league spokesman said Monday. “We talk to our sponsors all the time, whether it’s raining or the sun is out. We’ve talked to them, we keep them informed. I haven’t heard of a single issue of a sponsor that is worried or has raised particular issue about the weekend,” NFL spokesman Joe Lockhart told reporters during a conference call Monday.

And another flack enters the Liar’s Hall of Fame. Joe Lockhart, media whore, come on down!

I think I’m just going to put out a lawn chair, kick back, crack a Non-NFL cold one and watch the league implode with no stopping point.

Too bad about pro football. Once upon a time it had nice ideals.

Previous post: Lest We Forget: “The Story of Your Enslavement”