Riding Out Hurricane Charley, 2004 by Ghostsniper 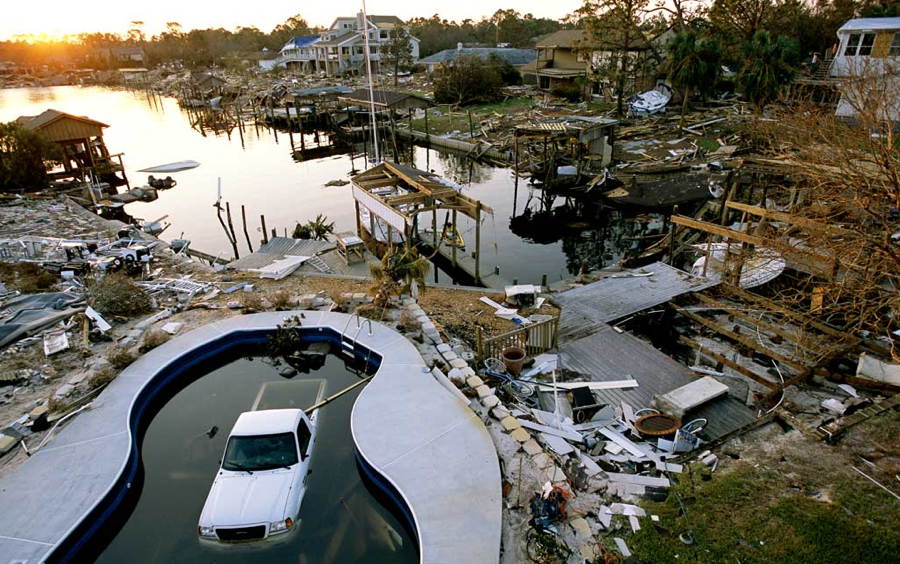 We went through hurricane Charley back in 2004 and food wasn’t on my agenda for the 9 days we did without power. Ice + water. That was my only concern.

Our house was only 2 years old. It was designed and built by me (Yes with my own hands – and about 100 other people’s hands. ), and sustained zero damage even though Charley’s eye passed within just a couple miles. But our 6′ high estate fence and most of the pool enclosure were completely gone as they are designed to be torn loose in small sections that FEMA describes as being “non-threatening to adjacent structures,” of which there were none.

All our freezer food was grilled in 24 hours then stored in coolers that were rapidly loosing their cool in the 100 degree, 90% humidity. After 3 days our water was getting low and there was no ice anywhere. I jury-rigged a cord to charge up our well equipment (220v) off my generator (110v), which I did every 12 hours. But it was ice I craved and there was no way to get any. There was an ice maker in the fridge but I wasn’t going to run the generator for hours to make that paltry amount of ice because fuel was also at a premium.

Hurricane Charley was the first hurricane to make landfall in our area in the 40 years I had lived there. It sort of caught us off guard. The numerous false alarms over the decades by the media had jaded us and we believed Charlie would pass us by. But in the last 2 hours it did a 180 in the gulf and came straight toward us.

Charley came NE from the gulf up Pine Island Sound and stormed across the land mass of Bokeelia Island then diagonally up Charlotte Harbor toward Punta Gorda, passing only a few miles NW of our home in the NW Cape Coral. Many roofs and large sections of walls were detached and deposited into Pine Island Sound.

I criss-crossed that Sound almost daily as most of my work then and still was the design of large scale custom homes on the islands of Useppa, Cayo Costa, Captiva, and Sanibel. Once, after Charley, while crossing the sound in a 32′ Donzi with twin 454 chevy V-8’s at about 50 mph, the boat hit a submerged roof breaking one of the lower units completely off and bringing the boat to a dead stop. I was standing and wrenched both shoulders out of the sockets – very painful. The driver slammed his face into the dash knocking out all his front teeth and another guy did a 50 mph somersault off the front of the boat and skidded 100 feet across a shell shoal and was bleeding from square yards of shaved flesh. We got back to the dock on a trolling motor as the computer wouldn’t let 1 engine fire up.

Charley caused the largest single residential claim in State Farm Insurance’s history in Florida. I did the restoration work on that home. It was on Upper Captiva and faced directly on the gulf, less than 200 unprotected feet from the home to the waterline. A massive custom 3 story on top of driven wooden pilings.

A 16′ wide sliding glass door on the 3rd floor failed and acted like an air scoop to Charley’s 300mph core velocities. Inside, the air pressure equalized and then over inflated the entire structure – it literally exploded. From the top down. The structural framework for the 3rd floor collapsed into the 2nd floor. Amazingly enough a large structural corner beam configuration that supported the 3rd floor dropped and landed on a Corian countered kitchen island that took and sustained the full weight. Kitchen island intact, the weight and wind force caused the 2nd floor to collapse into the 1st floor. All of this happened in mere seconds. The weight of 3 collapsed floors then caused 47 of the 48 10″x10″ pressure treated wood pilings to snap clean off. Only 1 was left undamaged. The snapped pilings caused the whole thing to collapse onto the ground like a giant pile of kindling wood in pastel Florida colors.

It was my job to wade into that trap and find out why the structure failed and that is how you now know the story you just read. As I said, at 3.5 million dollars, a total loss, it was the largest single residential claim in State Farms 100+ year history in Florida.

The owners were not present when the disaster occurred, having previously left to another island they also had a residence on (very wealthy, very nice – unlike all the lies you hear about wealthy people uttered through curled envious lips by the american communists). They decided they had loved the home and wanted it rebuilt just as it was before. So now my job was to reconstitute the home but in such a way that it would now be capable of sustaining 300mph continuous wind velocity.

It took a year to clear the property of the debris (there are no bridges to Upper Captiva so all things must be barged back and forth) and reconstruct the home. The only remaining original aspect being the 1 wooden piling that was not damaged. That piling was not incorporated into the structure as I questioned it’s structural validity, but a local guy chainsaw art effected it and turned it into a multiple ring toss game for drunkards. You know, the 3″ rusty steel ring on a long fiberglass masonry twine and you try to swing it to hook onto a small wooden peg. I think it had about 5 of them on that carved totem. I just looked at the place on Google Earth. It is alive and well and we still get a Christmas card from the owners each year.

Irma’s on it’s way to that area right now. I expect to get another Christmas card from those wonderful people this year. 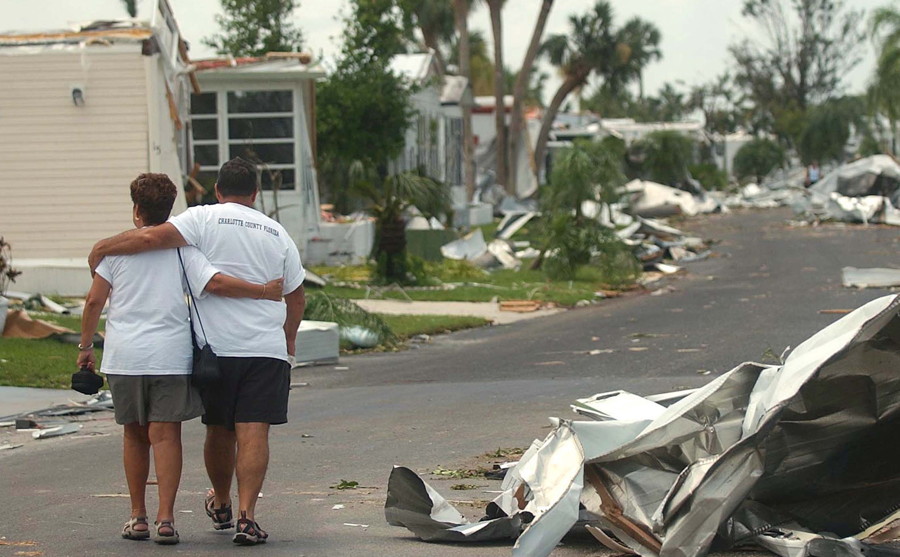