You Despair When There Is No Woodpile 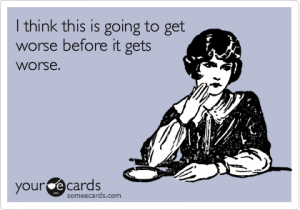 But when there is a new Woodpile Report your despair can only darken. Ol’Remus is not, as you know, a naturally cheery fellow when it comes to the future.

We live in the darkening foreshadow of a world catastrophe to be remembered for millennia to come. When it comes apart it will happen with no more warning than we have now. Each step down will be a disaster in itself, followed by worse, then worse yet, until many years later civilization becomes a fading memory told to disbelieving children. The wholly unprepared have no more than a single-digit percent chance of long-term survival.

Big city dwellers who believe potable water and their daily bread is “a human right’, whose lives rely on contracts and connections and persuasion, who take the weather personally, who hold leisure class values even as they’re being swindled into penury, who can’t prepare a real meal at home and hire an illegal to change a light bulb—they won’t survive.

Those who live far from cities and lines of drift, who have a circle of reliable relatives and friends at a good level of self-sufficiency, who have experienced scarcity or even poverty, who are experienced and well situated to hunt and fish and garden, or are already practicing homesteaders, who value self reliance, who know their home ground intimately and have prepared realistically—they may survive.

We can’t know how events will unfold. It’s likely the first post-apocalyptic months will seem to be, if not be, the most cataclysmic. The incompetent, the deluded, the resolutely unprepared and other self-selected victims will be winnowed in huge numbers. Add to them the chronically ill and elderly, the wholly dependent tribalists of the inner city and their feral broods, and the plain unlucky.

Old vendettas will be settled, chains of revenge for revenge will begin. City utilities will fail, sewage and garbage and corpses will contribute to unchecked disease. An exposed light at night will be worth your life. Enclaves will attack enclaves no less destitute than themselves. The naturally homicidal, suddenly unconstrained, will prey singly and in groups. Some uniformed enforcers of defunct martial law will go rogue.

Longtime readers know survivalism is summed up in my Most Excellent and Inviolable Rule One: Stay away from crowds. There’s nothing in this for the survivalist. Serial gunfights and derring-do are not the key to survival. The survivalist removes himself from this pointless maelstrom, ready to defend himself and others, but aware the hard work of preparation is not over. The long-term is still ahead and there’s plenty of room for things to get worse. And worse they will get.

Previous post: MeatFarms of the Near Future: Cultured Beef and What We’re Made Of