Barnes And Noble Scraps Diverse Editions After BacklashA publishing initiative to celebrate Black History Month by putting cartoon black and brown protagonists on the covers of classics novels written by white people — including The Secret Garden, Moby Dick and Alice in Wonderland — has been scrapped after backlash that called it literary blackface. 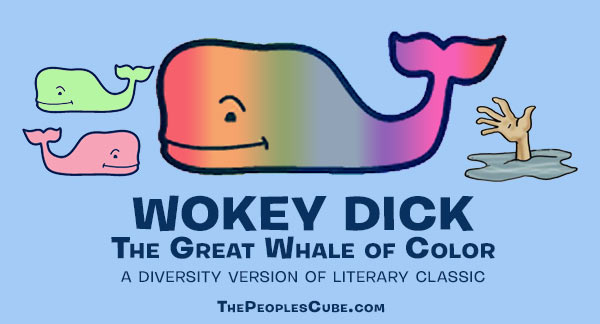 Responding to criticism that its initial diversity version of Moby Dick was merely a “fish tale in blackface”, Barnes and Noble vowed to radically restructure Melville’s ponderoous tome

Too begin with, the whale will no longer be a neutral symbol of unstoppable, remorseless nature. Rather, it will be recast as a sort of immense guardian whale shepherd who protects the more vulnerable members of the “oppressed cetacean community” from the “genocidal depredations of a heartless, hypocritical Christo-fascist patriarchy who would despoil the Earth itself in its hysterical racist fear of ….. The Darkness.”

As such, the captain of the vessel will retain many of Ahab’s characteristics, but he will be motivated more by a need to sublimate his fears of latent homosexuality necessitated by living in a patriarchal, hetero-fascist time. It was decided to go in this direction rather than make him a gay man named Gayhab. After all, you don’t want a gay man as criminal

As for the “whiteness of the whale” this was deemed exclusionary of “Cetaceans of Color”; not to mention non-validating of inner city “readers of color” who were eager to delve into cryptic, unreadable 19th century maritime literature. Accordingly, a black whale character has been introduced. Among the names considered were Marcus Dick, Marlon Dick, Moses Dick, Kobe Dick and Tariq Diq. For a moment the name Malick Dick popped up; but resistance soon stiffened; causing enthusiasm to flag.

Moreover, the name Toby Dick surfaced momentarily but was immediately dropped as it triggered some traumatic memories of the show “Roots” In the end the debate swirled around the highly descriptive names Mocha Dick and Cocoa Dick. As the committee found itself deadlocked on this issue, it was decided to adopt two whales of color and call them the “Sperm Squad”….

Previous post: The Parable of the White Whale and the Good Ship “America” in 2020