Who Are the Brain Police? 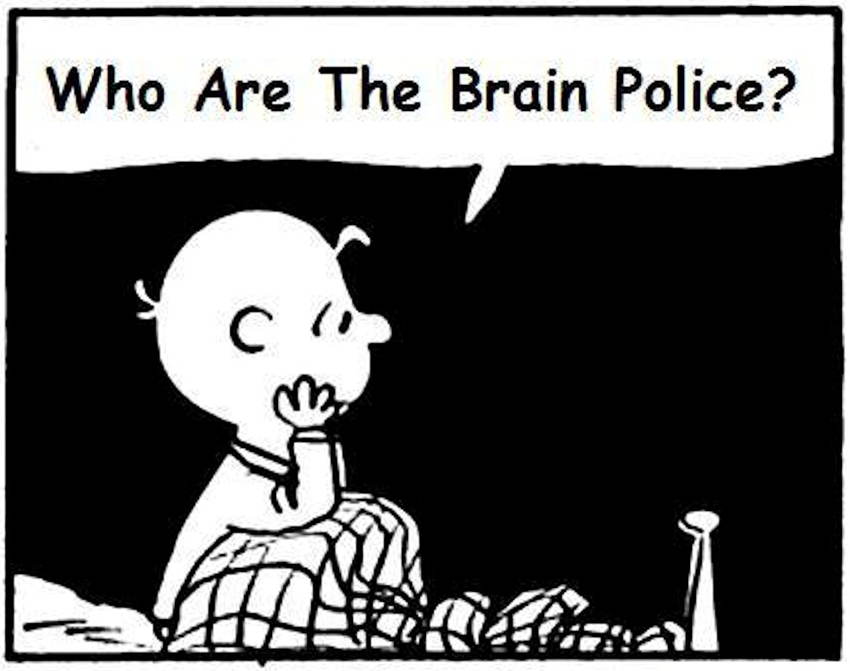 What I do with the news is I have the ability to watch the news from all different kinds of sources and remember the details, and collate the details, and come up with a conclusion other than which the people who own the media want you to come away with. If you watch only one news service you’re not getting the full picture. They try and tell you major world events in ten seconds, and you can’t do that. So what you have to do is compare different outlets, compare their spins, compare that to print, and then draw your conclusions. 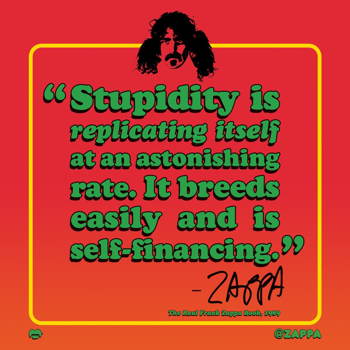 Do you think that one man, a President with a wise cabinet, could implement some changes, or is the society so complex that that institution, within the checks and balances system, would not be able to implement change?

I think it’s possible, sure. The reason that it’s possible is nobody has more access to the media than the President. And most of the evils of society can, in fact, be cured through information. We have a society that has been disinformed and based on the disinformation has made irrational choices. And that’s what I mean by “ignorance”. People, who ordinarily might be smart, are deprived of the data by which to make a rational decision, don’t have the data to do it. Nobody has got more control, or access to the media, than the White House Press Office. We’ve seen it. They’ve literally reshaped American history to their own ends. It truly is 1984: “Black is white, white is black, 2 and 2 is eleven”, whatever they want to tell you. “George Bush is an ecology guy. Ronald Reagan is a great patriot. Nancy wants you to say no to drugs, and she likes to say yes to the extra clothes that come in.” — Interview by Bob Marshall

It was 1966 and Frank Zappa was, as always, far, far ahead of the game because of the voices in his head….

Frank Zappa: At five o’clock in the morning, someone kept singing“Who are the brain police?” in my mind and made me write it down.  I will admit to being frightened when I finally played it out loud and sang the words. 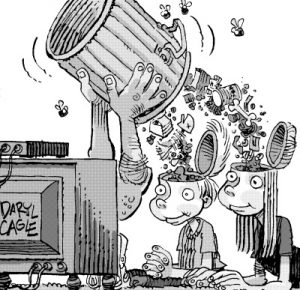 In a 1988 interview, Zappa added:
So, who are the brain police?
It could be anybody that decides to opt for employment in that organization. A lot of people police their own brains. They’re like citizen soldiers, so to speak. I’ve seen people who will willingly arrest, try and punish their own brains. Now that’s really sad. That’s vigilante brain policism. It’s not even official, it’s like self-imposed.

You once said that nobody ever figured out who the brain police are.
I’ve been working on it.

Some candidates?
It’s hard to pin it down to one central agency when you realize that so many people are willing to do it to themselves. I mean, the people who want to become amateur brain police, their numbers grow every day – people who say to themselves, “I couldn’t possibly consider that”, and then spank themselves for even getting that far. So, you don’t even need to blame it on a central brain police agency. You’ve got plenty of people who willingly subject themselves to this self-mutilation.

Warning: Dissonant,  harsh, and hard to listen to.

WHO ARE THE BRAIN POLICE?

What will you do if the people you knew
Were the plastic that melted
And the chromium too?
WHO ARE THE BRAIN POLICE?

Previous post: Meanwhile, across the pond the Queen opened Parliament with her traditional speech.