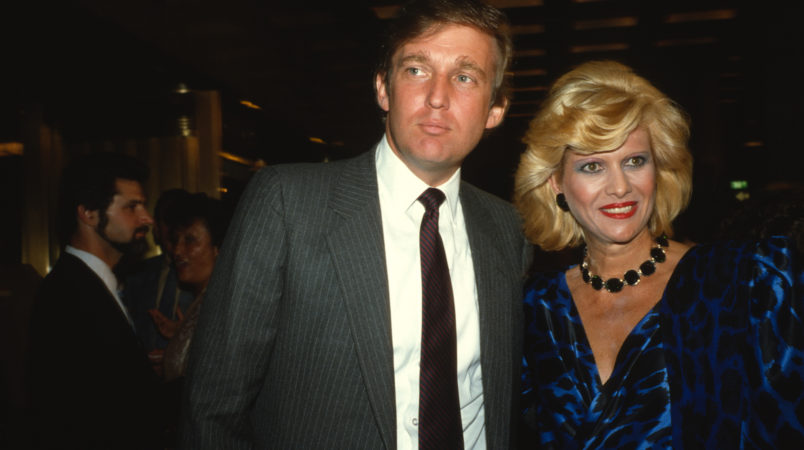 April 8, 1984 was the date this love was first consumated.

Excerpt from: THE EXPANDING EMPIRE OF DONALD TRUMP

SPENDING A DAY WITH
Donald Trump
is like driving a Ferrari
without the windshield.
It’s exhilarating;
he gets a few bugs in his teeth.

Donald J. Trump is the man of the hour. Turn on the television or open a newspaper almost any day of the week and there he is, snatching some star form the National Football League, announcing some preposterously lavish project he wants to build. Public-relations firms call him, offering to handle his account for nothing, so that they might take credit for the torrential hoopla.

He has no public-relations agent. His competitors wonder how this can be, but watching him at the sports forum provided an explanation. While executives of the other teams told the audience about problems of negotiation and arbitration, about dirty restrooms inside their arenas and street crime outside and about ‘attempting to move the Mets in the right direction,’ Donald Trump was electrifying the room the rat-a-tat-tat revelations, dropping names of star N.F.L. players and coaches he would sign in a matter of hours. He said further that he would ‘continue to create chaos’ for the N.F.L. and, by the way, that he planned to build a domed stadium in New York.

His next appointment is with Philip Johnson and John Burgee, the eminent architects. ‘These guys are hot,’ Mr. Trump declares as he breezes into their office. Models are brought in of Mr. Trump’s next – can it be! – proposed building, a 60-story castle, Trump Castle, six cylinders of varying heights with gold-leafed, coned and crenelated tops to be built at 60th Street and Madison Avenue. There is to be a moat and a drawbridge. ‘My idea,’ says Mr. Johnson with a mischievous grin. ‘Very Trumpish.’

‘Trump is mad and wonderful,’ says Mr. Johnson. The 77-year-old architect proclaimed the castle his ‘most exciting project’ ever. ‘Other developers come in with sober faces, carrying their market-research studies on what the public will like.’

The combination of Mr. Johnson, who is leading the architectural charge out of the era of glassbox moderism with such unusual buildings as the ‘Chippendale’-topped A.T.&T. building, and Donald Trump, who is excited about putting up the most distinctive buildings imaginable, seems positively dangerous. One can almost imagine this: ‘Phil, I’d like to build a 135-story cheeseburger on Park Avenue.’ ‘Lettuce and tomato on that, Don?’

With castles on the drawing boards, the first tenants are moving into Mr. Trump’s $125 million Trump Plaza luxury cooperative apartment building at Third Avenue and 61st. Street. His Generals are off to a winning start in their first season under his ownership. He is hovering attentively over his newly opened Xanadu of conspicuous consumption, the $200 million Trump Tower condominium-office-retail complex on Fifth Avenue, also supervising the final touches on Harrah’s at Trump Plaza, a mammoth $220 million casino-hotel in Atlantic City set to open next month.

Just as the name Donald Trump is well-known to most New Yorkers, the name is now becoming recognized throughout the country. He is fast becoming one of the nation’s wealthiest entrepreneurs, able to buy practically anything he wants. He controls a company with assets estimated – some say conservatively estimated – $1 billion, and casino-industry analysts say his half interest in Harrah’s may provide him with $40 million to $50 million more in annual income.

Although he is still interested in such ideas as putting up the world’s tallest building on the East River, his mind wanders from the business of New York real estate. The Generals were an impulse buy. He made a bid on The New York Daily News in 1982, when the paper’s fate was in doubt; he expressed interest in buying the Cleveland Indians. He has told people in the communications industry that he is ‘very interested in communications,’ which is like a 2,000-pound gorilla mentioning that he is very interested in becoming carnivorous. Until recently, he was purchasing large amounts of RCA stock, with an eye toward securing a controlling interest, but he gave up on that when the price of the stock more than doubled. He sold the stock, profiting handsomely from the failed takeover.

NEXT ON MR. TRUMP’S SCHEDULE IS A visit Trump Plaza on Third Avenue. The heads of several Fortune 500 companies have already bought co-ops here, along with Gov. John Y. Brown of Kentucky and his wife, Phyllis George; Martina Navratilova and Dick Clark.

While critics charge that Mr. Trump is a raving egomaniac, bent on putting his name on every inanimate object in the city, he claims that putting on the Trump name is value added.

‘These units are selling,’ says Blanche Sprague, who is in charge of sales at Trump Plaza, ‘because of the Trump name.’ A man holding a trowel says he is proud to be working on a Trump building and always tells his friends.

‘I don’t think you understand,’ Mrs. Sprague adds. ‘When I walk down the street with Donald, people come up and just touch him, hoping that his good fortune will rub off.’

The Trump touch. It has set some people in New York to outright Trump worship; they call him ‘a real-estate genius’ who has helped lead the city out of the darkness of the mid-1970’s into a new era of glamour and excitement. Mr. Trump does not take exception to that.

To others, the notion that Mr. Trump seems to be able to do just about anything he sets his mind to is terrifying. They see him as a rogue billionaire, loose in the city like some sort of movie monster, unrestrained by the bounds of good taste or by city officials to whom he makes campaign contributions, ready to transform Midtown into another glass-and-glitz downtown Houston, with Central Park for parking.

This faction believes that the Donald Trumps of this world are tending to have their way with our cities nationwide, receiving enormous tax abatements and whatever zoning variations they request – all in the name of revitalization. That government is helping rich developers to become richer does not sit well with them, not when small shopkeepers, who do not share in such government largesse, are forced out of business by rising rents, not when poor people are sleeping in the streets. That Mr. Trump builds shops and apartments for the world’s wealthiest people makes him that much more prone to attack.

Yet many urban-affairs experts view the developers as saviors of our postindustrial cities. ‘With manufacturing leaving,’ says George Sternlieb, director of the Center for Urban Policy Research at Rutgers University, ‘and with Federal and state aid diminishing, our cities desperately need the rich. Cities are tending to fall into two categories: cities of consumption and cities with no economic base.’

RTWT AT: Excerpt from: THE EXPANDING EMPIRE OF DONALD TRUMP

Next post: Dig It: Today an Excavator, Tomorrow an Aircraft Carrier