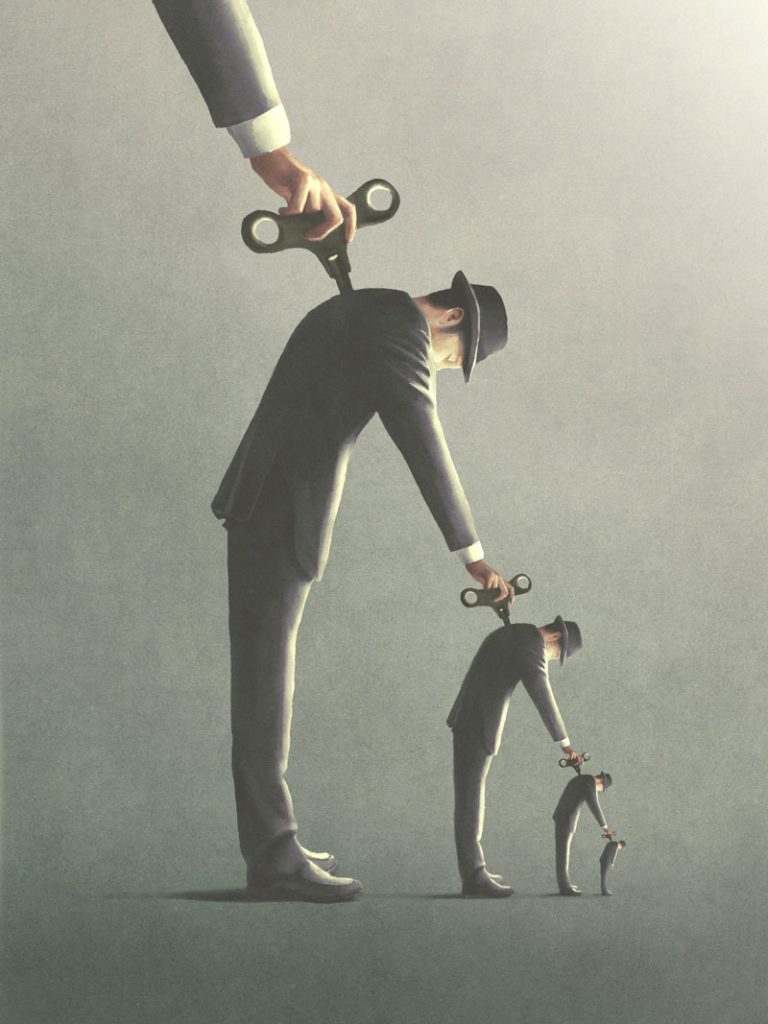 “A few hundred at the top, to plan and direct at every level; a few thousand to supervise and control (without a voice in policy) at every level; a few score thousand specialists (teachers, lawyers, journalists, scientists, artists, actors, athletes, and social workers) eager to serve or at least unwilling to pass up a job or to revolt; a million of the Pöbel, which sounds like ‘people’ and means ‘riffraff,’ to do what we would call the dirty work, ranging from murder, torture, robbery, and arson to the effort which probably employed more Germans in inhumanity than any other in Nazi history, the standing of ‘sentry’ in front of Jewish shops and offices in the boycott of April, 1933.”

—Milton Mayer, They Thought They Were Free: The Germans, 1933–45 (paperback, Kindle, audiobook)

No? Good. Then stop enforcing totalitarian measures against your neighbors on behalf of the tyrants, who wouldn’t hesitate to annihilate you. Stop planning, directing, supervising, controlling, and performing their dirty work. Become part of the resistance instead of an enabler of democidal despots.

You may not be one of the Gestapo agents beating individuals entering a public space without their vaxxport; wrenching children away from their vaxx criminal parents; pummeling anti-injection protesters; stripping and needle-raping resisters; reverting Australia to a penal colony; or restraining and forcibly injecting the elderly and mentally disabled (otherwise known as “useless eaters” by your predecessors).

You may not be one of the public health officials instituting ineffectual and deleterious mask guidelines and lockdowns based on fraudulent PCR tests; testing wastewater to justify iron-fisted measures; or falsifying the numbers to magnify a fabricated threat and conceal the deadly factual consequences and statistically astronomical number of adverse reactions to the injection.

You may not be one of the psychologists devising the mass persuasion campaign that has hypnotized the obedient, the gullible, and the ignorant around the globe.

You may not be one of the scientists too frightened of losing your career, credibility, grant funding, and future to denounce the fraud being perpetrated under the cloak of Science™.

You may not be one of the physicians violating the Hippocratic Oath and Nuremberg Code as you deny potentially life-saving medications, deploy murderous injections, administer lethal drugs such as Remdesivir, inflict ventilator-associated lung injuries, apply high-risk interventions like intubation, gang-inject patients, coerce pregnant mothers into risking miscarriage, refuse to treat non-GMO humans, and contemplate prioritizing ICU beds for the injected.

You may not be one of the nurses flouting the nursing code of ethics while pinning down screaming children as you plunge in the poison death jab.

You may not be one of the daycare employees torturing toddlers into wearing a mask.

You may not be one of the fascist institutions complying with the merciless edicts to fire the rational dissidents in your organization.

You may not be one of the censors suppressing evidence of all of the above atrocities while simultaneously silencing and smearing the honorable scientists, medical experts, whistleblowers, and other truth-tellers valiant enough to refute the preposterous narrative you have swindled so many into believing.

You may not be one of the propagandists blaring the Biggest Lie talking points over the loudspeakers through every conceivable mechanism 24/7/365 until the feeble-minded succumb to your relentless coercion from exhaustion, peer pressure, menticide, and Orwellian doublethink.

You don’t have to be any of those abominable scoundrels to be an enabler of tyranny.

See if you recognize your present or potential future self in any of the following scenes from these dystopian phantasmagorias our own world is increasingly coming to resemble:

Previous post: Boomer Anthems: “How White My Shirts Can Be”, 2021