Two Thoughts from “The Deeper Thought” 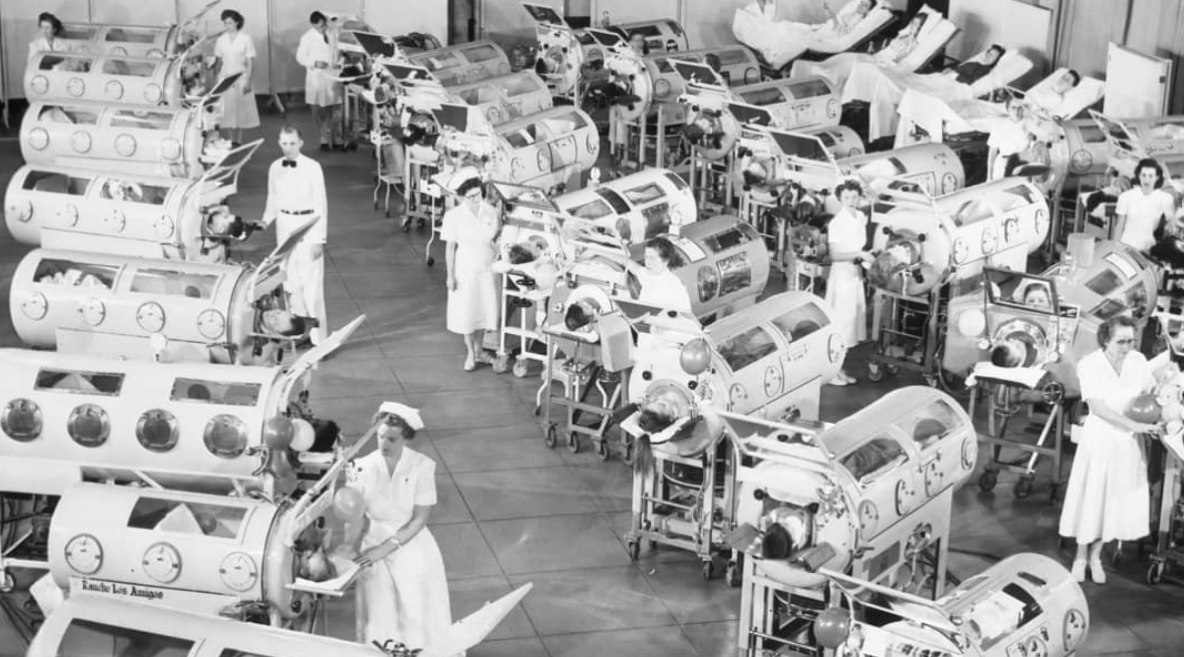 The words graven on the escutcheon of The Deeper Thought are “Think again before you believe what you are told- especially in media and politics.”

’54 was a plague year. It was not so much a twin to 2020-2021 but a mirror image- a perverse reversal. As there are now, there were two plagues stalking the land. One plague was Polio. Poliomyelitis, we also knew it as Infantile Paralysis, was rampant and the population most at risk were the children while Covid 19 is more of a threat to the elderly. Newspapers and magazines often featured horrifying pictures of rooms full of machines- giant gleaming steel tubes mounted on wheels with a child’s little head protruding from one end of each. They were called Iron Lungs and they were the only way to keep the children who were worst effected by the virus alive.

One of the odd symmetries between the two plagues is that in many states (New York and Massachusetts for example) 2020 many of the vulnerable elderly were shut into nursing homes with sick patients and healthy ones unsegregated leading to wild infection and death rates in that group. In the 1950’s schools and summer camps were open about as usual filling up more Iron Lungs with little heads.

So, I didn’t end up in an Iron Lung, but I did give my parents the biggest scare I ever could have without Polio. But they were scared for themselves. As I mentioned, I am “a Hyperactive”. I’ll make the case that Hyperactives are often well-meaning as kids. They just take a lot of joy in life and do not get stifled easily in that joy. As adults do, we learn to compensate with age and experience. We “get serious” and “fit in”.

My problem in 1954 was that at 5 years old, I passed an IQ test with a high enough score that my parents were able to place me in public school a year earlier than usual. So, there I was, I was not only hyperactive, I was a silly baby among older, more mature classmates.

It was not easy. Early in the school year, I got myself blacklisted by McCarthyism. Every morning, we all stood and recited The Pledge of Allegiance. This one morning, I stood with the rest of the class put my hand over my heart and began to repeat the words. I actually remember what happened next all these years later…

The “other” plague besides Polio in 1954, you see, was a political one; McCarthyism.

If Polio was a mirror image of today’s Covid19, McCarthyism was the same for today’s Progressivism and its evil avatar, Wokeness. This plague is sweeping innocent people before it. It is carrying our nation, actually, our whole culture to the very brink of totalitarianism… RTWT AT Between Two Childhood Plagues – The Deeper Thought

Second Thought: Who Are We Now? – The Deeper Thought

As it turns out, all this movement needs do to smear and destroy anyone who opposes its “progress”, is to say “That’s not who we are”. That insidious non-sequitur has been used to compel huge numbers of people to at least pretend to believe that some very normal and reasonable beliefs that were universally accepted only years of months ago are not just wrong but outside the pale of acceptable humane ideation- “not who we are”. Here is a partial list of those ideas:

If any of these ideas in this list makes you in the least bit uneasy, you are not “who we are”. .. RTWT AT Who Are We Now? – The Deeper Thought

Previous post: “The City of Brass” by Rudyard Kipling,1909