Trump vs CNN: The Summing Up 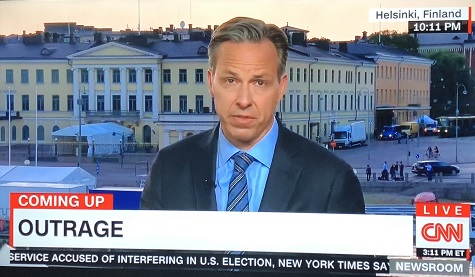 “Last night I fell asleep in front of the TV and I had a dream and I heard a CNN infobabe saying “We now interrupt the regularly scheduled hair-on-fire outrage about the evil Brett Kavanaugh and his normal wife and normal children to bring you this new hair-on-fire outrage about Putin getting Trump to kiss his butt in Helsinki. After this plays out, we may be bringing you more of that hair-on-fire outrage you may have forgotten, the bit where Trump personally stuffs little foreign children into cages and then laughs at them while they cry. Or maybe it will be the hair-on-fire outrage from not believing every word spoken by Peter Strzok whose super-duper patriotism is unquestionable because we’re not questioning it. But first, back to Helsinki where we’ve just received word that Vladimir Putin is raping Donald Trump behind the podium like a Viking and so here is a panel of experts who will tell you all about their hair-on-fire outrage from these events….” And then I woke up. Holy crap. No more eating fermented pineapples while watching CNN late night, I can tell you. But I’ve got one question. Why is it that, no matter how bad Trump may appear to look, his enemies always manage to make themselves look worse?” From the always worthwhile and often hilarious The Morning Rant

Previous post: “Conservatism” 120 years ago: “After a few years, when women’s suffrage shall have become an accomplished fact, conservatism will tacitly admit it into its creed”