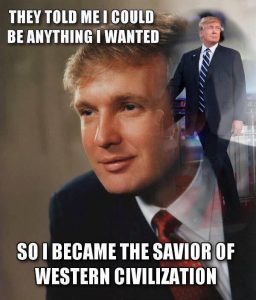 “Trump is known as a builder, but if there’s anything really Trump likes to do, it’s breaking things. Trump broke Kathy Griffin. He broke her really badly. He broke Michael Moore. He reduced Hillary Clinton to a bitter old drunk. He broke both Michael Avenatti and Stormy Daniels. He broke Rosie O’Donnell. He broke his former aide Omarosa. He’s in the process of breaking the anti-Trump propaganda network CNN completely. Everyone who goes up against Trump loses. It’s uncanny how some celebrity or athlete goes off on an anti-Trump rant and then fails professionally in some fashion, sometimes in unrelated ways. Just look at this schadenfreudelicious list. And now I hear that there are supposedly a whole bunch of anti-Trump movie scripts that have lately been floating around Hollywood. It reminds me of the height of the Iraq war when Hollywood released a bunch of anti-Iraq war movies. They were abysmal failures at the box office. They must’ve thought that most Americans were against the Iraq War. But at that time, most Americans supported the war. What a bubble they must live in. They must think that most Americans hate Trump. But that’s the way to get more Trump. And they’re going to get more Trump. Good and hard.” — VIA The Morning Rant @ The Ace Place

Next post: The Genius of the Crowd by Charles Bukowski

Previous post: When I Heard the Learn’d Astronomer BY WALT WHITMAN