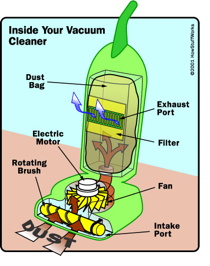 Thanks to the unremitting efforts of two wives and a number of desperate girlfriends I have, over the years, become a fully domesticated man. I cook. I iron. I put the seat down out of pure reflex.

Yes, I clean the house. I have a wide variety of products and tools for floors, ceilings, window, toilets, and countertops (I’m especially good on countertops since I not only have cleaning spritzers in plain acid wash and foaming bleach blaster, I also have a compound that renews the polish once the sanitizing has been completed.) I am the very model of the modern major traife buster.

I am, however, a bit sketchy on floors. This is not to say you couldn’t eat off my floors. You could because you’d find a host of food shreds there on any given afternoon. This is not because I like floors configured as mouse buffets but only because, being 6’1”, the floors are so far away I don’t really focus on them. My solution? The world’s most rapacious vacuum cleaner, “The Kirby.”

Actually, I have 2 (two!) solutions since I own 2 (two!) vacuum cleaners. The first is a kind of cheap, plastic metrosexual’s vacuum bought at some box store because it was cheap. Like all metrosexual items, it performs in a manner that lets you know all cheap things are worth much less than you spent on them. It sucks by not sucking as a sucker of floor dirt should. Very sucky. It is, at the best, back-up. Bags and parts for it are sold everywhere.

Then there’s “The 2004 Kirby Diamond” weighing in are over twenty-three pounds of solid chromed steel, titanium bristles that can skin a black rhino, and a woven cloth bag wrapped around the vacuum bag that could be made into an outdoor area rug. The motor in this bad boy is so powerful it can suck kittens out of my basement through the floorboards in the living room. It is the chopped Harley Hog of vacuums. 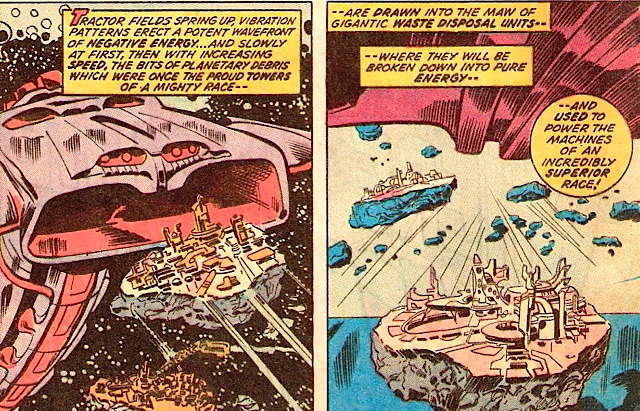 The bags for this hoovering T-Rex are built to blast stresses and are rare as dinosaur eggs. Finding them always calls for an expedition to far-away strip malls and into some Norwegian albino’s small appliance parts shop sandwiched between a sketchy Malaysian smoke shop and a lap-dance rec room. It’s a chore.

So much of a chore that when The Kirby’s bag filled up about three months back I was too lazy to pack a lunch and go find new ones. My solution? Pure genius!

I took out the old bag which was almost rock-solid with dust mites, hair, and the bones of desiccated kittens and, holding it over the toxic waste recycling bin behind the garage, cut the bottom open and shook the contents into the bin. Then, because there is nothing it cannot do, I duct-taped the bottom of the bag and slapped it back in The Kirby.

Fast forward three months and I am manhandling The Kirby over the current mouse buffet and noticing that for a super-sucker its sucking sucks. So I say to myself, “Self, check it out.”

I open the military gauge zipper on the back of the bag and instantly a fibrous tumor of hair and dust mites oozes out. I retreat and don Haz-Mat suit. I inspect the Superfund site that is my kitchen.

It would seem that my duct-tape resealing of the bag had, well, failed to hold the bag’s universe together some months back and that all creatures great and small that had been sucked off my floors were now compressed into a hairball that threatened to expand into all of known space.

Seeing everything that has come off your floors in the last three months in one wad is a unique experience but I resisted the urge to perform an archeological dig on the site. Instead, I deployed a very large garbage bag and, grimacing, transferred the dust mite condo from the bag into the bag.

It was only the beginning.

Upon double-gloved inspection of the inside of The Kirby’s bag, I found that at least an inch of detritus was still impacted into the cloth on all surfaces. I scraped at it a bit but the dust cloud just deepened around me and drifted out onto the previously pristine floors. Disaster loomed. Then I remembered.

“I own two vacuums. I shall vacuum this vacuum with a vacuum!”

In no time I had deployed vacuum two — the previously mentioned “cheap, plastic metrosexual’s vacuum” — attached the hose with the special little attachment that is used for sucking coins and popcorn kernels out of deep crevices in the couch and switched it on.

Its puny little metrosexual motor wound up and went to its wheezing limit. I tested the nozzle on my hand and felt the feeble suck but knew it would be better than scraping The Kirby’s inner bag surface with my fingernails. I deployed the nozzle inside the clogged bag and carefully and thoroughly went over all the surfaces until they seemed, well, “clean enough for government work.” Then I shut it down and carefully swept the dust and other detritus on the floor into a pile and sucked that up too. Then I mopped the floor of the kitchen. Twice. Until it gleamed.

I took a shower. I mixed a celebratory cocktail. I went to Amazon, found a pack of 12 bags for The Kirby, and ordered them on two-day delivery. I went into the kitchen and thought to myself, “A wise man would now replace the bag in the weak little vacuum that has all the leavings from The Kirby in it.”

I opened the “cheap, plastic metrosexual’s vacuum” and knew instantly that many moons ago I had taken a bag out of that vacuum and somehow failed, FAILED!, to install a new one. A cloud of hair, dust, dust mites and the bones of small animals exploded from the case and drifted across the gleaming kitchen floor and the carefully polished countertops. I stood in the cloud at ground zero and felt the dust of ages settle on me.

They say that “Nature abhors a vacuum.”

Nature’s got nothing on me.

Next post: Bored with Basketball? I Am. Try My New Spectator Sport.