“To see what is in front of one’s nose needs a constant struggle.” — Orwell 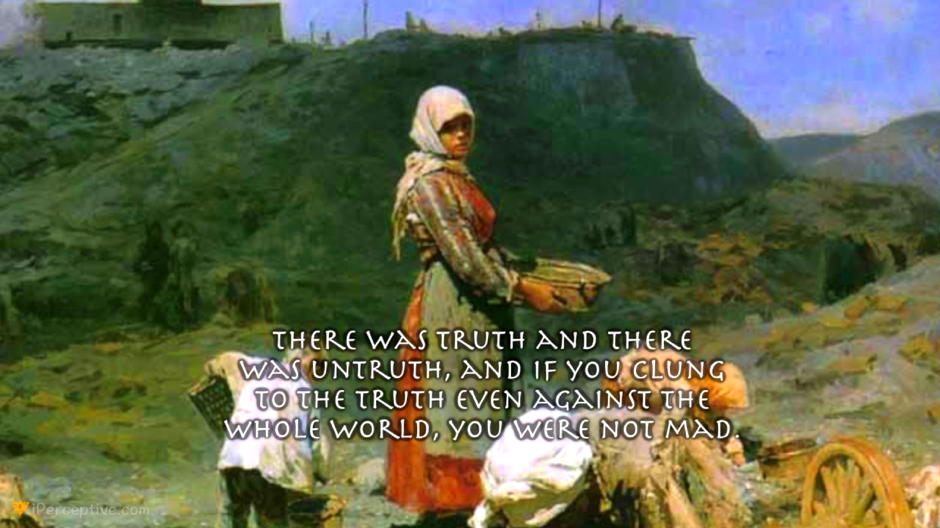 For example, the Russian people were taught for years that they were better off than everybody else, and propaganda posters showed Russian families sitting down to abundant meals while the proletariat of other countries starved in the gutter. Meanwhile, the workers in the western countries were so much better off than those of the U.S.S.R. that non-contact between Soviet citizens and outsiders had to be a guiding principle of policy. Then, as a result of the war, millions of ordinary Russians penetrated far into Europe, and when they return home the original avoidance of reality will inevitably be paid for in frictions of various kinds. The Germans and the Japanese lost the war quite largely because their rulers were unable to see facts that were plain to any dispassionate eye.

To see what is in front of one’s nose needs a constant struggle. One thing that helps toward it is to keep a diary, or, at any rate, to keep some kind of record of one’s opinions about important events. Otherwise, when some particularly absurd belief is exploded by events, one may simply forget that one ever held it.

Political predictions are usually wrong. But even when one makes a correct one, to discover why one was right can be very illuminating. In general, one is only right when either wish or fear coincides with reality. If one recognizes this, one cannot, of course, get rid of one’s subjective feelings, but one can to some extent insulate them from one’s thinking and make predictions cold-bloodedly, by the book of arithmetic.

In private life, most people are fairly realistic. When one is making out one’s weekly budget, two and two invariably make four. Politics, on the other hand, is a sort of sub-atomic or non-Euclidean world where it is quite easy for the part to be greater than the whole or for two objects to be in the same place simultaneously. Hence the contradictions and absurdities I have chronicled above, all finally traceable to a secret belief that one’s political opinions, unlike the weekly budget, will not have to be tested against solid reality. — In Front of Your Nose | George Orwell

Next post: Boomer Anthems: Nights on Broadway (“Here we are / In a room full of strangers”)

Previous post: Theodore Roosevelt on the 5 things that will destroy America