Time to Pay a Visit to the Little Hitlers Among Us: “The People Will Not Allow You to Do This”

Time for some freedom marches on your local little Hitlers. It is NOT ENOUGH TO SIMPLY CRITICIZE “THE PARKS DEPARTMENT” or any other government agency. That method means there is no personal responsibility, just hiding inside a nameless DEPARTMENT OF FREEDOM SUPPRESSION. We have to identify the little Hitlers working inside all these agencies of government. Somewhere in the bowels of the Parks department is a PAID WITH TAXES bureaucrat who initiated, signed off on, and ordered insane restrictions such as this demented nailing of boards to the park benches to inhibit sitting at will on the part of the free American, whoever and wherever that citizen may be. This bureaucrat or bureaucrats must be discovered (public records, minutes of meetings, inside informers), named, NAMED REPEATEDLY AND PUBLICLY, and the phone number of their office given as well as the address of the office and email address of the office. These INSANE POLITICAL CLOWNS deep inside must be NAMED. NAMED AND SHAMED. If this sort of thing persists, people need to take a page from the left and visit their homes. 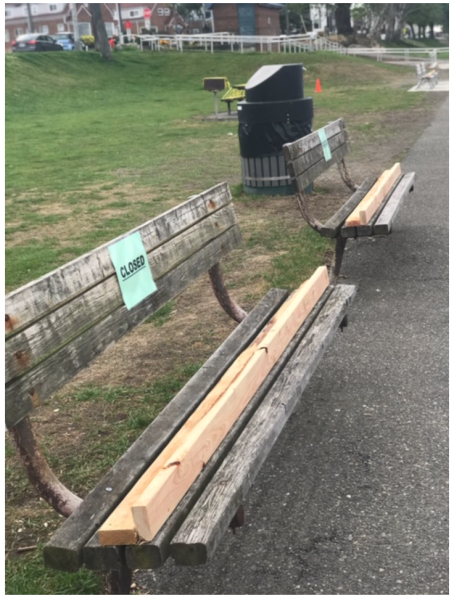 Meanwhile, the government doesn’t seem to realize how effectively they’re shortening the lifespan of the lockdown with moves like sabotaged park benches. This kind of crap is going to force a necessary capitulation and a far less graceful “easing” of restrictions than the government envisions (if they envision it at all). I actually kind of appreciate this – life will be back to normal sooner this way. The PVP Diaries #30 – Andy Havens

4:28 PM: That photo of a boarded-up bench at Alki came in just as we heard about this new “Keep It Moving” action from reader John, who had emailed Seattle Parks to ask if “Keep It Moving” also meant to keep people from resting on benches – as he and his spouse do while out walking – or to stop parents of little kids from sitting on the beach while their children played. The reply he got from a Parks staffer:

… We don’t have the staff capacity to sift out more and less appropriate activities, so we’re using the “blunt instruments” such as the Keep Moving initiative and partial closures such as at the beach where people tend to congregate and party. These measures are the best we can feasibly do at this time.

Of course parks are not only for the young and fit, but it seems relevant that persons who are older and less fit are at the highest risk from the virus. We’re doing our best, with the tools available to us, to keep people safe during this public health crisis.

Seen in Idaho two days ago with the response by the community:

Next post: Be Prepared: You Can Still Get Gas in Heaven and Drink in Kingdom Come. In the meantime, I’m cleaning my gun.