“Time to bring them home.” President Donald Trump and the Dead at Dover 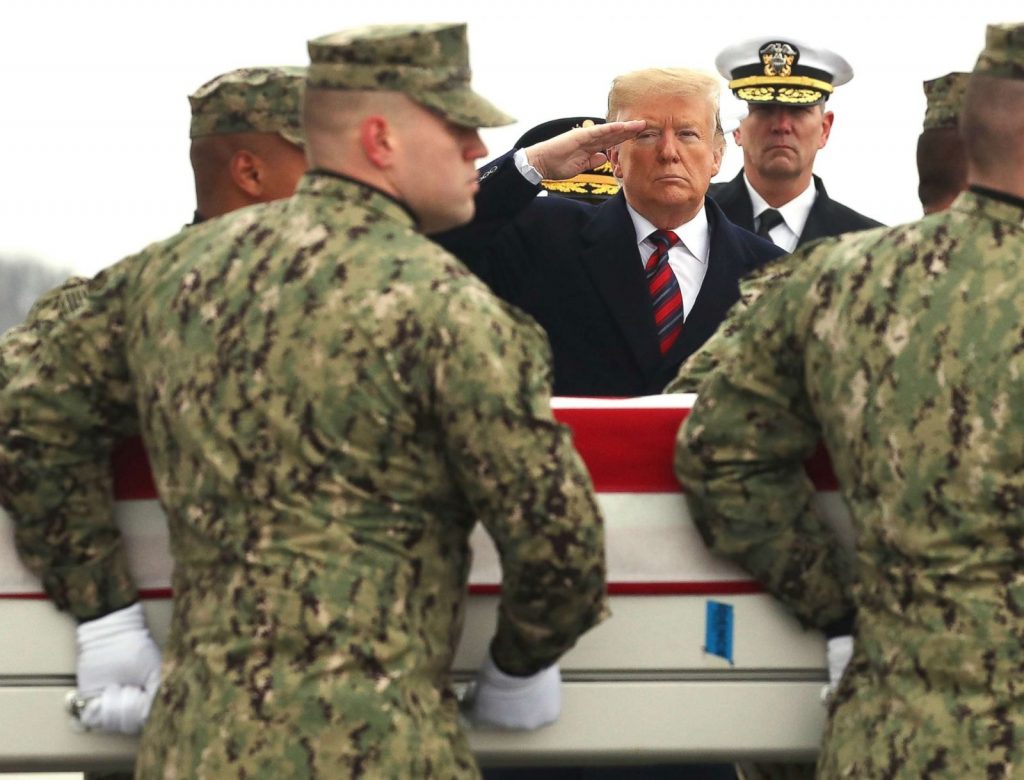 And every letter is individually done because sometimes the parents, they’re grieving, and they get together with other parents, and I don’t want to see that it’s like the same letter…

And I sign those letters, and it just, it breaks your heart.

….And sometimes I send letters out… it’s called blue on green… where the people we’re traing how to fight and turn the gun on our soldiers and shoot them in the back. And that’s the hardest thing for a parent because they learn how their child has died. We’ve had a lot of that, a lot of it in Afghanistan, more than we’ve ever had proportionately before. It’s a horrible, horrible thing.

Sometimes I go out to a place, Dover Air Force Base, it’s a very tough experience. Mike Pence goes, I go, other people go, Tom Cotton goes. We go out there, and we meet the parents and the families, the wives, the children, the sisters, the brothers. We meet them, and we talked to them, and their son or daughter is being flown in from some far-away place in a coffin…. I don’t know how parents can do it.

What happens is this big incredible machine flies in, this tremendous cargo plane, and it flies in so powerful, so big. I’ll be talking to some of the parents, and they’ll act like they’re fine. I said, “How are you doing?” “We’re fine, sir. We’re fine. We’re really good.” I say, “That’s great.” And I’ll tell the Colonel, I’ll say, “Colonel, I think they’re doing great.”

“No sir, they’re not going to do great. You’ll see.” And I didn’t know what he was talking about, this was the first time.

Then we went outside to the runway. The plane lands and it pulls up, and we have military guards and musicians play. That’s what they do. The Colonel told me, “Sir, when that door opens up, those same people that you think are okay, do things that you’ll never see. You will hear sounds like you’ve never heard.”

I saw that door open up with a coffin with a flag over it. The door was opened, and these beautiful soldiers, five or six on each side, lifting the coffin and walking down onto the runway,  off this cargo plane.

And I see parents, that just 20 minutes ago were absolutely fine, make sounds, scream and cry like you’ve never seen before. A mother who was fine 20 minutes ago breaking the military line and then jumping onto a coffin of her son or her daughter, jumping on, lying on top of the flowers, on top of the American flag.”

Next post: Columbus Day: Not about Columbus, not about the indians (aka “indigenous people who walked here and then started killing each other”)