TIME OUT! “Your Pie Sir”: The All-American Origin of the Pie Fight 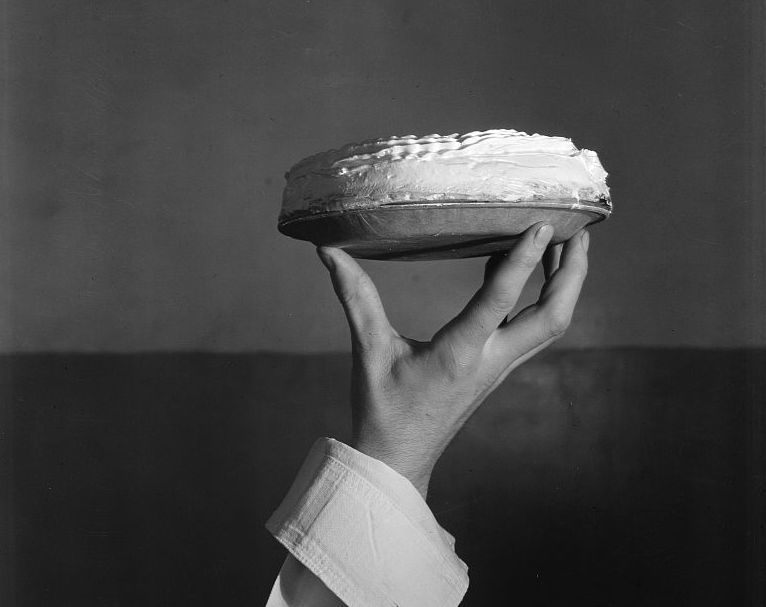 The ‘Pie Engineer’ Who Designed a Dessert For the Jazz Age

In his 1939 book Pie Marches On, Strause’s publishers summed up his approach: “He has reduced pie baking to an exact science and measures each ingredient with the care of a pharmacist.” This style meant no volume measurements (Strause wrote that “the tea cup and teaspoon are the greatest enemies of a good pie”) and endless experimentation. Once, he made 150 different versions of cherry pie. His pie fixation also meant he had the tendency to get a little high-and-mighty. Strause once sniffed that housewives “tend to be too slipshod for scientific pie-making.”

Social Distancing PiePocalypse: Not 6 feet away? “You… wouldn’t… dare…”

One problem in particular vexed him. He was supremely unsatisfied with cream pies, which were thick, heavy, and reminded him of cornstarch pudding. This characteristic was a personal insult. Strause once ate so much cornstarch pudding as a child that he became sick, and he couldn’t stomach it at all afterwards. So he began experimenting on a new cream pie.

The result was the Chiffon Pie, the crown jewel of Strause’s illustrious pastry career and a genre of pie that endures to this day. Inspired by recipes for French pastry cream, Strause developed a pie filling that incorporated stiffly beaten egg whites into a cornstarch-thickened cream. The result was a delicate, airy filling that retained its firmness and volume, one that “stood up like a soldier on parade,” as the New York Herald Tribune later described. As for the name, the story goes that when Strause first presented his mother with his new creation, she exclaimed that the smooth, light filling was “like chiffon.”

Previous post: What Biden Is Now:”Meantime life outside goes on all around you…”