Thomas the TrannyTank Engine and the Tyson Test: On Bringing Back the Punch-In-The-Nose 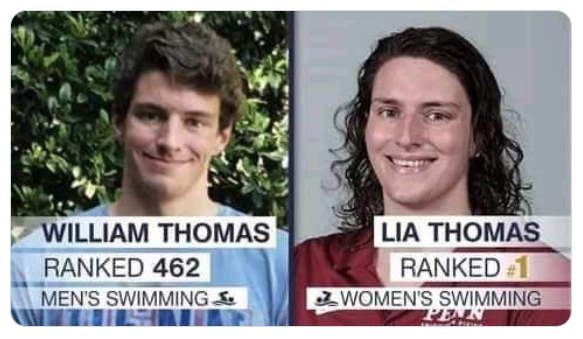 Elsewhere on the web, somebody responded to my outrage at the perverted trans swimming gurl Thomas the Tucked-In with, “As far as we know, some of the female athletes may be boycotting the races. Unless you know the usual roster, you wouldn’t know who’s missing.”

To which I replied:

I didn’t call for a boycott. I called for the women he was swimming against to stand up and be counted. I called for any woman who is tasked with swimming against this demented and psychotic man to mount their starting blocks and then, when the start sounded, just stand on the blocks as the psychotic man swims his laps and gets out to preen at the podium. Then they simply walk back to the dressing room. Silent.

And yes it is hard to do with careers, scholarships, and peer pressure, but other women and men are fighting in the Ukraine… a bit harder profile in courage than I am calling for here. Theirs is risking life and limb. Here they simply don’t get wet.

As for the blame being on the guy pretending to be a gurl… yes HE is the one to blame for his overweening ego… and the officials who changed the rules to even allow this sort of thing to happen… also to be blamed…. and the schools, etc. etc. and so forth.

And the men the swimmers have in their lives — brothers, lovers, fathers… where have they been all these months? All of them must at last directly confront the psychotic Thomas the TrannyTank Engine and his sponsors. If any of these men now put up with his perversion of the sport even if they are oh so politely protesting… well they’re not really men either, are they?

Fellow Americans with any sense of fairness, unite. It is long past the time we brought back the sincere punch in the nose as a legitimate and required form of argument.

Time for the progtards’ plans to get the Tyson Test.

But then again maybe all have been so paralyzed by the progtards’ unremitting attack on culture and tradition that all those who were once Americans, those men and women been unsexed in the era of all sorts of sexes.

Where we once had men and women maybe we have — at long last — been turned into eunuchs. In which case, off we go into the dustbin of history.

Oh well, we had a nice run. Too bad it ended in this confused and anguished pot of progressive pop.

On second thought, I don’t really care about this cancel culture garbage any longer.

Just delete the above comment. I would have but I ran out of time.