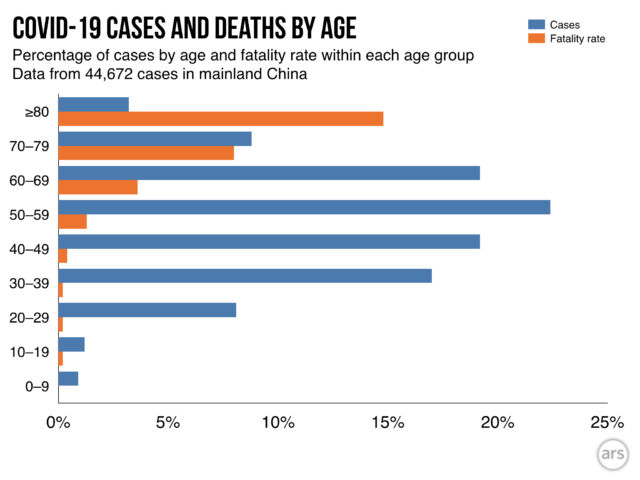 How severe is the infection?

Most people infected will have a mild illness and recover completely in two weeks.

In an epidemiological study of 44,672 confirmed cases in China, authored by an emergency response team of epidemiologists and published by the Chinese CDC, researchers reported that about 81 percent of cases were considered mild. The researchers defined mild cases as those ranging from the slightest symptoms to mild pneumonia. None of the mild cases were fatal; all recovered.

Otherwise, about 14 percent were considered severe, which was defined as cases with difficult or labored breathing, an increased rate of breathing, and decreased blood oxygen levels. None of the severe cases were fatal; all recovered.

Nearly 5 percent of cases were considered critical. These cases included respiratory failure, septic shock, and/or multiple organ dysfunction or failure. About half of these patients died.

The overall fatality rate in the patients examined was 2.3 percent.

The timeline of the two developments — impeachment and coronavirus — is shocking, and reveals the true cost of hyper-partisanship.

For twenty days, from the day the first death from coronavirus was known, Democrats did nothing about it. They were too busy with the president’s impeachment trial — a trial Pelosi had delayed unnecessarily for several weeks.

Previous post: Something Wonderful: Goose Visits Man Who Rescued Her Every Day