The Wrath of Gnon: “Traditionalist”

“The Wrath of Gnon” means, roughy, the Wrath of Nature’s God. The man behind this handle has gone from From Tumblr to Tweetstream WrathOfGnon

His first Tumblr posting from 2015: 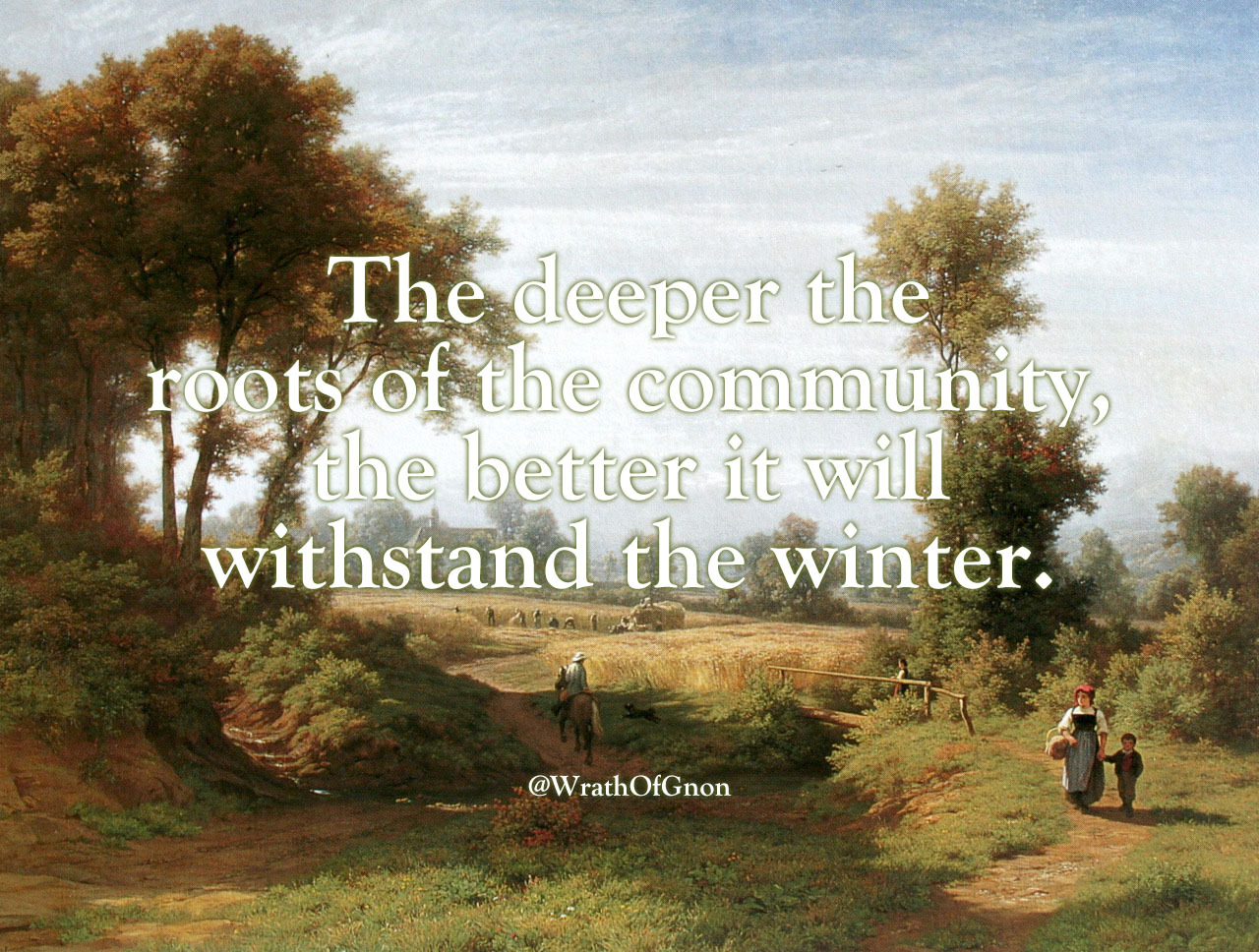 Last year he moved from Tumblr to Twitter where he currently has about 100,000 followers. A fine “Remnant” with which to start over…

Excerpts throughout from    Why Traditionalism Matters: An Interview with Wrath of Gnon | The Bridgehead

Anyone mildly interested in traditionalism—be it beautiful old architecture, the preservation of fading cultures, magnificent literature, or simply an instinctive aversion to the ugliness of modernity—has probably heard of the “Wrath of Gnon,” a mysterious Twitter user who seems to spend a lot of time unleashing beauty onto social media. He—I know he is a he because in an email exchange, he referred to a promise he made to “Mrs. Wrath” to remain anonymous—combines beautiful artwork with thought-provoking quotes, all designed to make the viewer consider his worldview: His Twitter bio simply reads “Traditionalist.”

Since childhood I have had an interest in the folksy, the vernacular, the local, but my intellect was stymied by the usual nonsense they teach in high schools and grad schools all over the world. Not only had they managed to cut whole generations from their roots, turned us into vast semi-nomadic herds of idle consumers, but they bathed our minds with sweet-smelling false ideologies and dogmas, where obviously destructive ideas like…the blank slate theory, multiculturalism, and feminism, destroyed not only individual lives but threatened the whole of civilization. In school we treated Rembrandt with the same respect as Duchamp, and I rebelled against that because it was so obviously a ridiculous comparison. I painted in oil myself, and when I got home from art class and wrestled with the same materials as those of the old masters I knew that all of “modern art” was outrageously false….

Imagine creating buildings that get better as they get older – enhanced by the bruises and scars of time.

If it were to fall into ruin, it would continue to capture our admiration. So well designed, so beautifully crafted.

Beauty Endures. The Classical Tradition is the Future. pic.twitter.com/RgsEAyXx1u

This example serves as well as the Bee Orchid, however I just learned this moth exists and don’t know enough to speak on it. To me, this *proves* that there’s more than “random mutation” https://t.co/erlUC0FtGz

On Feb 15 was Luperaclia, honoring Faunus, god of fertility. Men went to a grotto to Lupercal, the wolf god, near Palatine Hill. They would sacrifice a goat, don its skin, & run around hitting women with small whips (an act believed to promote fertility)

Now that is romance pic.twitter.com/nh53AHjEnb

Currently planning the insect pets for this summer. Traditionally crickets were the most popular but I don’t care for their looks. I think grasshoppers are far more beautiful and make a softer nicer chirping more suitable for the home. pic.twitter.com/OKvo43mLu8

Seattle does not receive a lot of snow on most years but even then, the design of the Space Needle observation deck has to be some new and rarefied levels of stupid: shove it into buckets, take it down the elevators, dump it outside. https://t.co/nHkxQKcPCT

Illegal to build anywhere in the U.S. today. Except theme parks. Maybe we should just declare a medium sized defunct shopping mall a theme park and build something like this in its place? https://t.co/4QVOcBMpA1

I believe that we are heading for a collapse, and I also believe that the survivors of this collapse will be the most homogenous communities, the strictest, the most pious. The first casualty of the collapse will be individualism. There is safety in numbers, and history provides us with many examples of survivors, groups and societies that wintered the collapse. Salvation is communal: “Remember the old saying, ‘The only thing we can do alone is go to hell.’” If we only have the sense to lay down deep roots, to seek safety in each other, then we have a fighting chance, and in this, faith is key.

In the future people will buy these hand drawn artifacts and display them in museums. https://t.co/GUGQETMN5i

We are supposed to be excited about the prospects of buildings made from discarded industrial waste. pic.twitter.com/wVfCi2royn

Sometimes you pick up a completely random book, about a subject you never even heard about and you just can’t put it down again. “Reining in the Rio Grande” by Fred M Phillips, G Emlen Hall, Mary E Black, is one such book. Here’s one excerpt, on the tragedy of San Marcial Valley: pic.twitter.com/QdLyPamSxb

1868 photo of legendary Japanese sword master and scholar Tachibana Kuranosuke (1820-1880) discovered. During his lifetime he had many thousands of students, from highest ranking aristocrats to commoners. https://t.co/O1MSxN7qEY

Why not take the worst planned, ugliest empty plot in your city and build rows of two story almshouses on it? You could finance them as a medieval corrodary where the labor or money invested earned you a right of future residence or a place on its board of directors. https://t.co/8EEsTEcDF3

“People are asking for bread & they are being given stones. They beg for advice about what they should do ‘to be saved’, & they are told that the idea of salvation has no intelligible content & is nothing but an infantile neurosis.”—A Guide for the Perplexed, E.F. Schumacher 1977 pic.twitter.com/rTCqAb7aS3

Everything being built today is so similar that I can just copy paste my critiques and they will fit right in. Especially the renderings. https://t.co/dNmQ4MJouE

…. I have this idea—like so many of my ideas, it used to be common sense—that beauty is essentially truth, and truth is essentially beautiful. Human history is varied enough that there are real life—once existing or still existing—examples of the ideal form of every human virtue. What I do is present them in an easily sharable form. I am suspicious of tracts and I detest manifestos and ideologies, I would rather show than tell: why does monogamy work? Why is personal charity superior to societal welfare? Why are picturesque crooked streets preferable to modern city streets? I try to focus on the beautiful and avoid pointing out errors and mistakes (but it is hard to stop oneself sometimes).

Before a major storm or hurricane, remember to secure your garden tools, your window shutters and your flotilla of construction barges. https://t.co/kR62kJ2ncq

Invite the jungle into the city and you also get the mosquitoes. This particular species is adept at surviving in modern cities: vertical gardens and concrete = jackpot. And do wear a helmet if you walk around beneath the buildings, especially windy days. https://t.co/OdxdD2t4mH

I’ll never forget the time I spent with a young Down Syndrom woman and her nomadic family in Mongolia. She pulled her load as much as anyone else, but constantly cheerful, always happily busy with household chores. To hell with modern civilization if it can’t be made to fit them. https://t.co/jT7m6VnZT0

You will never be as cool as a Tokyo firefighter in the middle of the 19th century wearing this cotton hanten. Doused in water when going out to fight the blaze, then turned inside out for the (victorious) return journey. #MementoMori pic.twitter.com/QZZqY5Ngz8

A woman I once met told me this: “To judge a place, look at the stray cats. If they are friendly, bold and relaxed, you know it is a good village with good people.” pic.twitter.com/GypzbQwHUj

…Nothing good will come from engaging with politics. There is no way you can play their game and not suffer for it. What traditionalists should do however is to refuse to play the Left’s game (and all of politics is leftist by definition) of political correctness. The Left is constantly trying to get us to denounce, or to deny, little by little to chip away at our pride and moral stand by forcing us to make (consciously or unconsciously) “unqualified reservations”, in feeble attempts to stave off criticism. This has to stop.

Factory entrance, Copenhagen, 1901. The decline in architecture has been incredibly steep since then. pic.twitter.com/WKJc6M9QJ1

One of the most iconic instances of classical architecture in the American arts of the 20th century: the 1929 art deco 55 Central Park West, NYC, as it was used in the movie Ghostbusters. pic.twitter.com/fXCwFg95yN

Most people who read this live in an area on Earth that is eminently suitable for digging or drilling wells, if for no other reason than to ensure that you have access to fresh water in an emergency, in case of prolonged black outs or tampering with municipal water reserves. pic.twitter.com/ED6VSZhaa3

Everyone has heard of the people making an effort to live more natural lives, off-grid, usually deep in the country or far away from other people. What if I told you we could live off-grid, but in the heart of cities and thriving urban communities? #OffGrid #UrbanPermaCulture pic.twitter.com/4opNq6lP7B

One way to reduce lion vs. human conflicts: help protect cattle from predation. “None of the 683 painted “eye-cows” were killed by ambush predators during the four-year study, while 15 (of 835) unpainted, and 4 (of 543) cross-painted cattle were killed.” https://t.co/8kf4ty10yC

… As an intellectual discipline, there has never been a better time for traditionalism than now. Almost all the material we need is available online for free. Traditionalism is one of those rare -isms without any established canon or hierarchy of thinkers. The main point is to read old books. Not only are they usually free, they are also less infected by the modern mind virus that forces you to have to read everything critically, questioning. With old books you should read them with an open mind, trust that author, and to submit, at least while reading, to the notion that the author was correct. My memes could serve as useful starting points in terms of authors and ideas, but in the end it is up to everyone to heath their own path and to not be afraid to be picky readers. No one has time to read all of everything. But traditionalism, like all things, is best experienced in real life and with good friends.