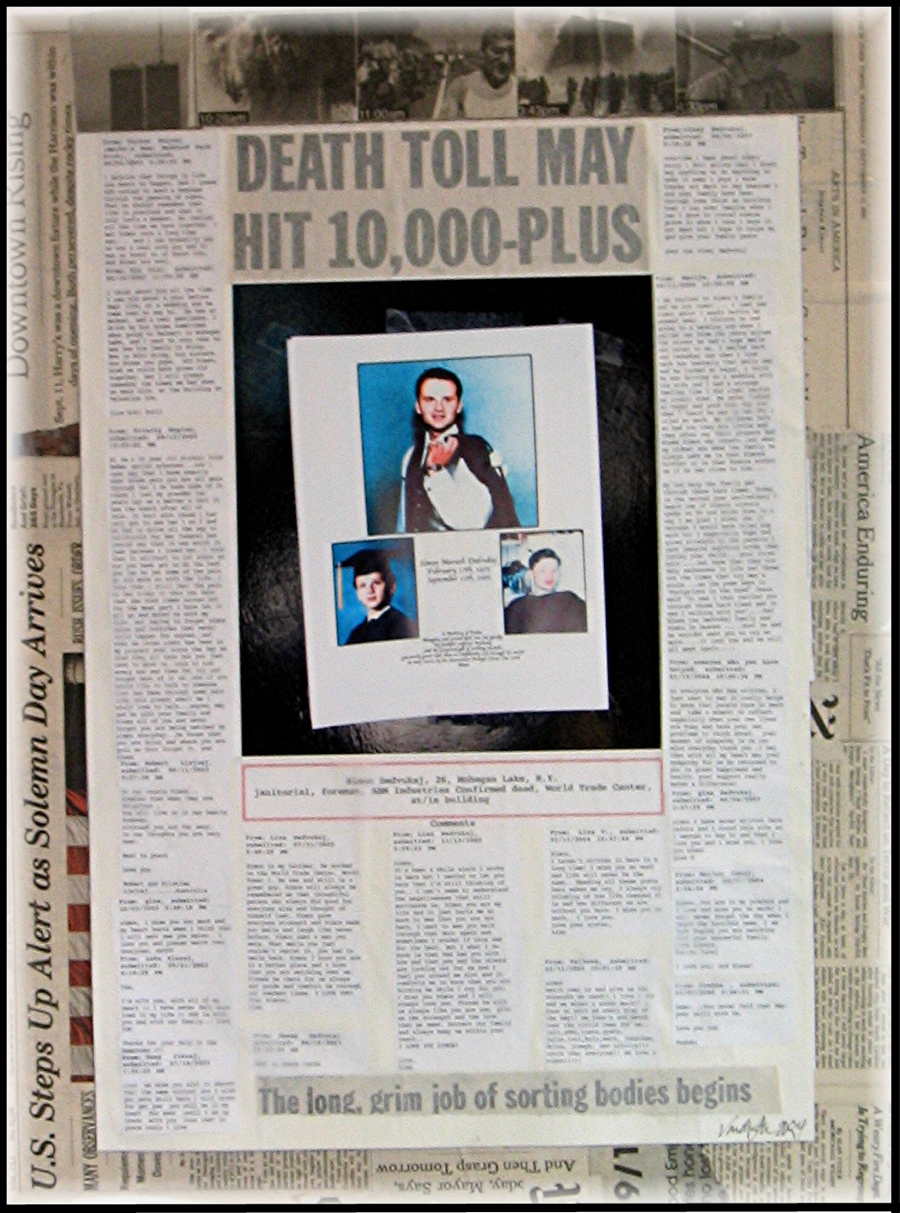 The huge wound in my head began to heal
About the beginning of the seventh week.
Its valleys darkened, its villages became still:
For joy I did not move and dared not speak,
Not doctors would cure it, but time, its patient still.
— Thom Gunn, The Wound

EVERYONE WHO WAS IN NEW YORK ON on “The Day” will tell you their stories about “The Day.” I could stun you with an eight-figure number by running a Google on 9/11, but you can do that as well.

“The Day,” even at this close remove, has ascended into that shared museum of the mind to be placed in the diorama captioned, “Where Were You When.” The site has long since been cleared and scrubbed clean. There is even an agreement on the memorial which will, I see, use a lot of water and trees. “The Day” has become both memorial and myth.

Less is heard about the aftermath. Less is said about the weeks and months that spun out from that stunningly clear and bright September morning whose sky was slashed by a towering fist of flame and smoke.

You forget the smoke that hung over the city like a widow’s shawl as the fires burned on for months.

You don’t know about the daily commutes by subway wondering if some new horror was being swept towards you as the train came to a stop deep beneath the East River.

You suppress hearing over the loudspeaker, always unclearly, that the train was being “held for police activity at Penn Station.” Was that a bomb, poison gas, a mass shooting, a strike on the Empire State building? You were never sure. You carried a flashlight in case you had to walk out of the tunnels that ran deep beneath the river. Terror was your quiet companion. After the first six weeks, you barely knew it was there.

If someone tells you that the melted wax from the candle shrines at Union Square had a radius of 20 feet and a depth of 4 inches at some points before it was scraped away, that’s just a data point.

If someone mentions that there were pictures of those we called ‘the missing’ put up on walls about the city, you might recall that. What you won’t recall is that they appeared everywhere and grew in numbers on nearly every surface on the island until there was no block and no main station that didn’t host a grim and large gallery of these images.

You’ve forgotten about the shrines, large and small, that appeared at the door of every fire and police station of the city overnight. You don’t remember how they grew and then shrank until only a few vases of flowers and faded flags remained.

Wounds, as noted in the poem above, heal. Lots of Americans like this fact. Many now make their living from the process. Explainers, obfuscators, politicians, pundits — they’re all part of yet another bogus new-age industry, grief counseling. Let some disaster, small or large, occur and these locusts descend from wherever they spend their off-hours to feed on the fear and pain of that other bogus group, “the survivors.” Many of us are proud to be members of this group. I’m sure somewhere someone is selling t-shirts and badges that say “I’m the Proud Survivor of ______” (Insert disease or disaster of choice).

Wounds heal. Those that don’t become “mortal wounds.” All others heal. That’s the nature of wounds. What isn’t often mentioned is that wounds, in healing, leave a scar. A scar is a different kind of skin that covered the wound and, because it is stronger than the original skin, it is called “proud flesh.”

Along with grief, scars are another thing our brave new age sets out to eliminate. With the application of money and skill, most scars in time can be made to disappear, to be made beautiful. Americans approve of this process. We like to make new fresh flesh appear where old proud flesh once was. All smoothed out. All traces eradicated. We move on. We get over it. We wear white trousers and walk upon the beach. Tomorrow is another day and we will never be hungry again.

Wounds do not heal, they only seal themselves up and we erase the scars with myths and monuments. Unless we are required to, every so often, go back and look at what was without sham or falsity.

Selecting a few images from a very bad year takes you back into that time. Because you fear opening the wound, you work at some remove from what the images return to you. Until you come to one that takes you back and you find yourself there, in that time, in those weeks and months after ‘The Day.’

Mine was a picture of a flyer posted around the city. One of the thousands of flyers posted everywhere. I’d hardly noted it at the time, but kept it in a folder called “September.” It shows three pictures of Simon Dedvukaj. He’s in a tuxedo with the jacket tossed over his shoulder in one shot. Another shows him wearing the cap and gown of a high school graduate. The third is a candid snap taken, I imagine, in his room with some out of focus possessions in the background. There’s a prayer at the bottom and at the top the information: “February 15, 1975 — September 11, 2001.

Three strips of wrinkled tape fasten this to a black metal surface. The photo, I know, was taken somewhere in lower Manhattan at 9:18 on September 11, 2002. The flyer is crisp and the tape fresh so someone must have spent time over the previous days printing the flyer up and sticking it to surfaces around the city. His family? His friends? Certainly one of those groups. Did they do it again on September 11, 2003? I don’t know. I wasn’t there to look.

What can I know about Simon Dedvukaj? I can know what you can know if you run another Google search. It’s an unusual name and you won’t get many hits. What I can know is this: “Simon Dedvukaj, 26, Mohegan Lake, N.Y. janitorial, foreman, ABM Industries Confirmed dead, World Trade Center, at/in building 2. “

That’s from an early list. One of many put up to track the dead — “26” “janitorial,” “foreman,” “confirmed dead,” “at/in building.2” There are thousands of other listings just as stark.

It is no wonder we move on from these facts, that we work to heal the wound and erase the scar. These are things too grim to carry. We have to put them down. Unless we know more than the stark facts above. Then we carry them with us. Forever.

I can know more about Simon Dedvukaj, a man whom in his janitor’s uniform, would have never been more than another member of that faceless crew of New Yorkers who take the subways in at 4 AM to turn on the city, or take them home after midnight having cleaned up and shut down the city. I would have passed him without seeing him. I still would. So would you. But still, I can know a lot more about Simon Dedvukaj. I can know about it from his sister Lisa:

July, 2002
From:Lisa Dedvukaj, submitted: 07/31/2002 5:45:28 PM
Simon is my brother. He worked in the World Trade Center, North Tower 1. He was and still is a great guy. Simon will always be remembered as that thoughtful person who always did good for everyone else and thought of himself last. Simon gave everyone strength and Simon made you smile and laugh like never before. Simon what a man you were. That smile you just couldn’t resist it, you had to smile back. Simon I know you are in a better place and I know that you are watching over us. Please be there for us always and guide and comfort us through our needest times. I LOVE YOU!
Your Sister,
Lisa
September, 2002
From: Lisa Dedvukaj, submitted: 11/13/2002 3:59:23 PM
Simon,
It’s been a while since I wrote in here but I wanted to let you know that I’m still thinking of you.. I can’t seem to understand the negativeness that still surrounds us. Simon you are my life and it just hurts me so much to see that you are not here, I want to see you walk through that door again and sometimes I wonder if this was for the best. But I what I do know is that God has you with him and that you and the others are looking out for us and I feel you around me alot and it comforts me to know that you are holding me while I cry for you. I miss you Simon and I will always love you. Please be with us always like you are now, give us the strength and the love that we need. Protect our family and always keep us within your reach..
I LOVE YOU SIMON!
Love,
Lisa
Last month
From: Lisa V., submitted: 01/11/2004 10:47:44 PM
Simon,
I haven’t written in here in a long time! I miss you so much and life will never be the same.. Reading all these posts here makes me cry, I always cry thinking of how life changed it is and how different we are without you here. I miss you so much.. I love you.
Love your sister,
Lisa

Just a janitor. Just turned on the city and cleaned it up. “How different we are without you here….”

I called for armor, rose, and did not reel.
But, when I thought, rage at his noble pain
Flew to my head, and turning I could feel
My wound break open wide. Over again
I had to let those storm lit valleys heal.
— Thom Gunn, “The Wound”

Next post: Noted in Passing: “Never Forget” … the bullshit

Previous post: Long Read of the Century: The Falling Man by Tom Junod