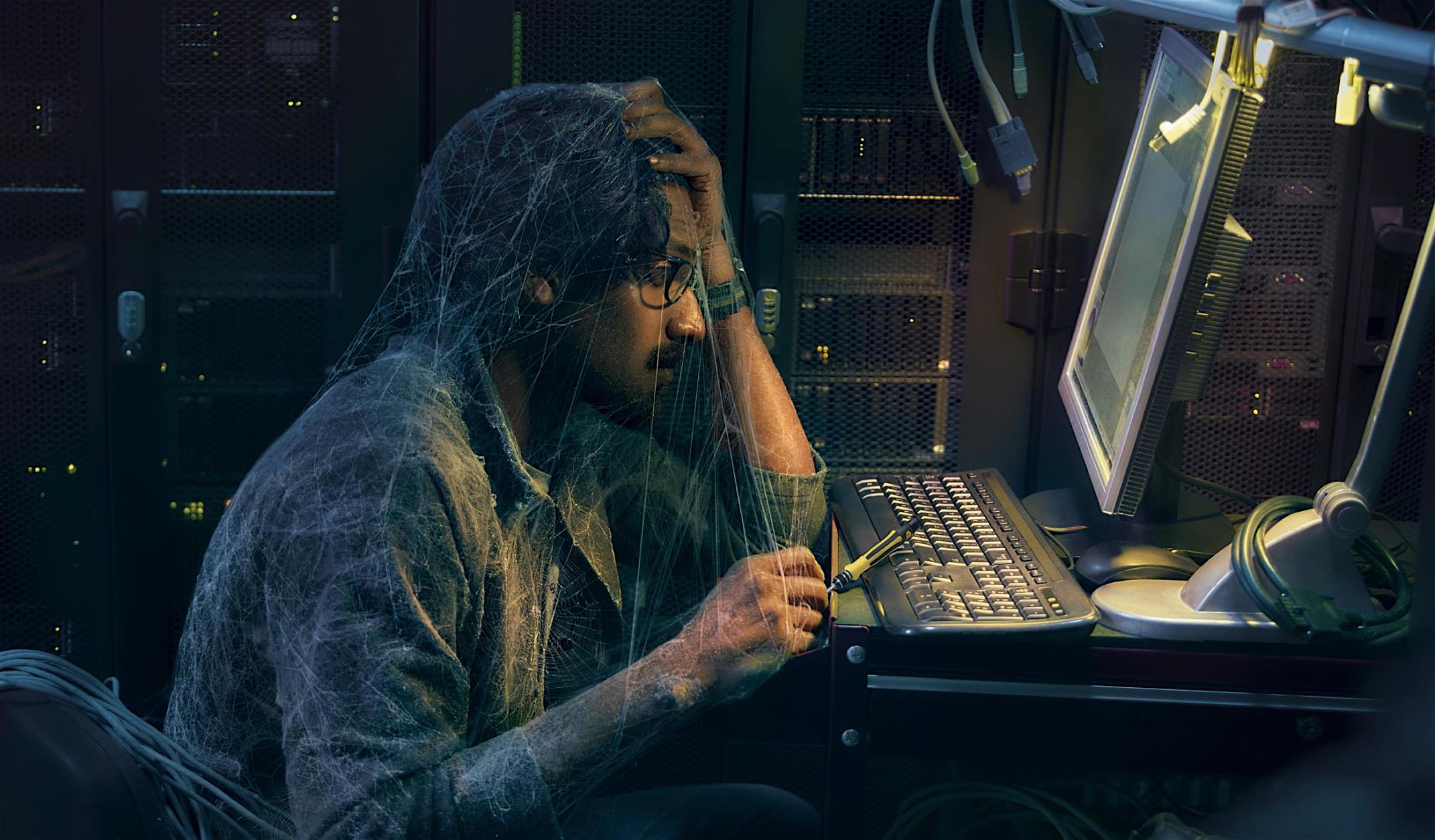 In fact, so many spiders are getting so busy that it behooves you to begin the day waving a straw broom across your doorways and walkways lest you end up wearing a web. Getting your face slapped and your mouth filled with web is no way to start the day. I know. So sweeping the air with a broom like some latter-day sorcerer’s apprentice is required. That’s my current ritual and it works, most of the time. But webs, I’ve found, come in all sorts of shapes and diameters, and not all are easily seen and swept. Miss one and you get a face full of web and the spider gets, I imagine, very ticked off seeing his long night’s labor wiped out in a split second. If you both get very unlucky, you get a mouth full of the web with a crunchy spider filling. Not my idea of a crisp morning’s memorable moment.  Certainly not the spider’s.

At the same time, you don’t want to be too enthusiastic about web wipeouts. I know how beneficial it is to have spiders at work in a wet environment like a houseboat community. Where spiders weave mosquito populations are severely reduced, flies too. If you want insect life kept down to a dull buzz, you don’t want to destroy any webs that aren’t directly in your way. Besides, after a fog or light rain at dawn, or in the slanting late afternoon light, you are can see dozens of gleaming diadem-dappled webs moving ever so gently in the light breeze off Lake Union. Regardless of how you feel about spiders, their work and their webs are both beneficial and beautiful.

Then I noticed the fly. For a fly, it was kind of cute. It wasn’t a big buzzer fly that can batter on a window. It was a small fly, insignificant even by fly standards, a pipsqueak. It sat, bobbing slightly up and down as flies at rest often do, on the decking just below the web above. From my giant’s vantage point, it seemed to be scanning the green water and moored boats for whatever it is flies scan for with their ommatidium eyes. Being a fly it had no real knowledge that just overhead death lurked with its many invisible strands. Touch just one strand, fly up into just one, and that would be the end of my little fly’s all too short history.

That’s when I got the idea that I could help this small fly avoid destruction with the slightest of gestures. I could see it was courting an unpleasant and lingering death but it could not. The fly sensed no danger at all. Why would it? It didn’t have that powerful frame of reference we humans believe we have in the 21st century. It lacked our overweening certitude and preening “knowledge” that we finally know, to a certainty, all the important facts about the Universe — its size, its age, our place in it, and all the other hubristic crap we tell ourselves because, in the final analysis, we are still afraid of the great darkness that we’ve done our best to make larger and darker.

In the same way it didn’t know it was trapped, the fly didn’t realize that it was free; that some omnipotent being beyond its ken had granted it grace. Instead, in response to some deeper programming, the fly returned again to its pre-ordained place in this infinitesimal corner of the universe. There it courted the same fate I’d tried to save it from, lifting up to fly about in the strange right-angled way that flies do as if seeking the strand I’d severed. And always returning to the self-same spot.

Through the glass I can see the spider, who owns the web under which my fly sits. Something, some faint tremor from a single strand, has alerted the spider and it is starting to scuttle, ever so carefully, from that shadow it waits in towards the center of its web.

Next post: Noted in Passing: Sanctions? Not taking as big a “bite out of crime” as Biden hoped