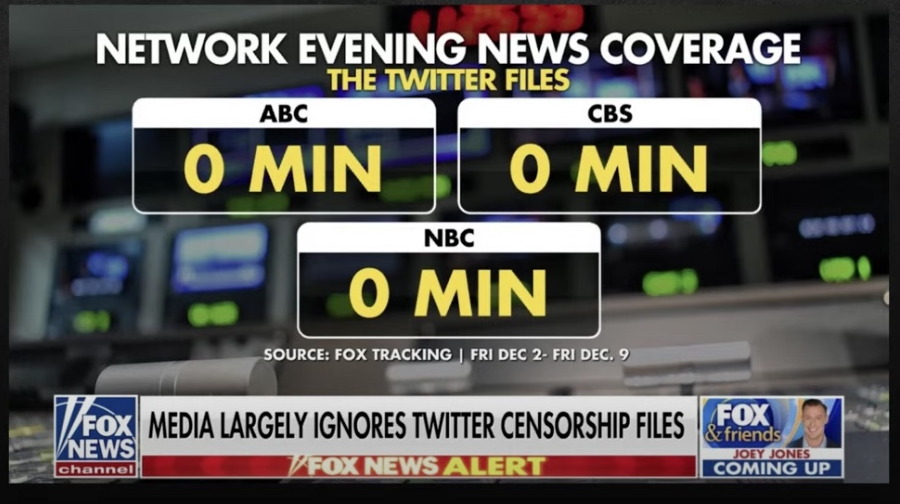 Dave Rubin this morning took a close look at the mainstream media and the release of the Twitter Files revealing the long and sordid Twitter history of censorship, election meddling, Wuhan Flu obfuscation, and pandemic lying and suppression. His overarching observation is, “We are splitting into two internets.” ***

Splitting? Already in my rearview mirror.

*** At the tail of it all “Silly leftist clowns” at the New York Times are mugged by reality.

UPDATE: The Findings on the Removal of Donald Trump from Twitter

28. Things escalate from there. Members of that team came to “view him as the leader of a terrorist group responsible for violence/deaths comparable to Christchurch shooter or Hitler and on that basis and on the totality of his Tweets, he should be de-platformed.”
29. Two hours later, Twitter executives host a 30-minute all-staff meeting. Jack Dorsey and Vijaya Gadde answer staff questions as to why Trump wasn’t banned yet. But they make some employees angrier.
30. “Multiple tweeps [Twitter employees] have quoted the Banality of Evil suggesting that people implementing our policies are like Nazis following orders,” relays Yoel Roth to a colleague.
31. Dorsey requested simpler language to explain Trump’s suspension. Roth wrote, “god help us [this] makes me think he wants to share it publicly”
32. One hour later, Twitter announces Trump’s permanent suspension “due to the risk of further incitement of violence.”
33. Many at Twitter were ecstatic.
34. And congratulatory: “big props to whoever in trust and safety is sitting there whack-a-mole-ing these trump accounts”