The Squirrel on the Porch by ghostsniper 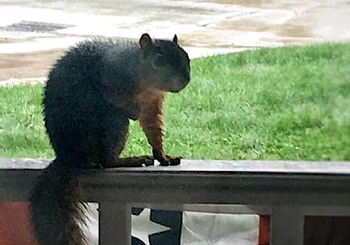 “This is the best I can do. The very best. Isn’t it enough? Isn’t that enough to have love.”
==========
If that is true then she needs to lie down and die right now. I believe something else. I believe everyone can be better, all the time. I believe everyone should always keep trying, to be better, at all things, all the time. Life isn’t a destination it is a journey, and I know everyone has heard that thousands of times, but the journey isn’t hands-free nor is it a spectator sport. You must participate like your life depended on it, cause it does. When you stop living you start dying.

The same is especially true for love. It’s not something you get one day, and then just live happily ever after. Finding someone that loves you as you love them is just the beginning, the down payment. Anybody can do that part and most people do. More than once. If it doesn’t last you should discover what you have learned from the experience. And improve. You can’t change others but you can change you and that’s the best you can do. After the down payment, there is a lifelong payment plan. What, you thought you could pay the down payment then cruise carefree the rest of your life? Not hardly. Now the real work begins.

In the army they had a term, “If you can’t get out of it, get into it.”, and there’s a lot of life wisdom in those few words. Those 10 words are probably the best thing I got out of that institution and they have spurred me on hundreds of times over the decades since when all I wanted to do was give up and throw in the towel. Instead, I thought of those words, dwelled on them and spread meaning and came back with renewed fervor to slay the obstacle that was trying to make me fold. I got into it, and it too was cleared from my path.

My marriage and my emotional commitment to my only wife will be over when my life on this earth is over. I can’t get out of it, and after all this time I don’t want to. I’m not certain I made that commitment when we got married in 1984, but somewhere along the way, I guess I subconsciously did and it’s been that way ever since.

It’s been bumpy at times, very much so at other times, and there were many times when I wondered, “Why don’t I just cut her loose as she clearly is not deserving of me.” I always came to the same conclusion. I am better with her than without her. I am a better person with my commitment with her a success than a failure. A failure will nag at me, all the time, whether I think so or not, and drag me backward in ways I am not even aware of. I prefer success over failure. So with each mile marker, with each occurrence where her and I didn’t see eye to eye I got “Into it”. I found ways to improve me. Eventually, I became aware that I was leading by example. Many examples. Hundreds. She too had consciously or unconsciously chose to “Get into it”. Whether by her own thought process or in part, but observing me. Doesn’t matter, we both win.

At about 6:20 this morning with the temp already in the mid 70’s I sat on the porch with Shannon laying by my feet touching me. She always has to touch me. I saw her staring out between the railing pickets idly, panting, knowing I was going to prepare her breakfast shortly. My wife, and our son and granddaughter here on a week-long vacation snoozed. The world right now belonged to me and Shannon and the early sun faced us and presented the day, which would not be filled with rain like so many so far this year.

The roof beam across the porch has a variety of things hanging from that we have put there over the years. The large wind chime with 2″ dia pipes that sounds like a church we used to live close to when we were first married that played them every Sunday morning. The double hummingbird feeders that our temporary San Diego guests, Greenback and Redneck just can’t get enough of. And the tall narrow faded blue birdhouse with a rusty scrap time roof and an equally faded yellow sunflower encircling the entry hole. Every one of the 12 years that old birdhouse has hung there since I built it has raised a new family in the spring and this year they were 2 Blackcap Chickadees. They have flown the coup but frequently come back to the ol’ homestead for a peak.

Look, a squirrel! No kidding. There are many new squirrels this year, many more than usual. And they are unusually naively bold.

This one jumped off the side of a black oak and landed on the railing down at the far end of the porch about 40 feet away. I saw it but Shannon had not, she is still letting the rising sun hypnotize her. The squirrel bounds along the top of the railing toward me and I sit as still as a corpse. I’m dying for a sip off my mud but I dare not. The next few moments are more valuable to me than any coffee could ever be. It keeps coming and I know not is it is a male or female.

Squirrels always look a little bit like cats to me. But very high strung ones. Very nervous, high blood pressure. Being prey animals they are hard-wired that way, ready to flee instantly all the time. It was now right in front of me and about 18″ above Shannon’s head and she still wasn’t aware of it. I imagine her eyes were partly closed and she was lulling like she frequently does. But noses don’t lull. Unlike eyes, noses have no on-off switches. An obnoxious vapor expulsion is just as foul at night as day. The young squirrel and I stared at each other. It was less than 4 feet directly in front of me. I had 2 eyes on it and it had one on me. It was as curious of me as I of it. But I’m sure I was more appreciative of its presence. I can only wonder why it came to me like this.

We poised idly for probably about 2 mins, and I marveled at its texture, the detail around its eyes, the transparency of its big bushy tail – an amazing creature before its scent was discovered. Shannon lurched upward and the young squirrel spun in its axis and was 10 feet down the railing before she was fully upright. One-half second later Shannon was doing 30 miles an hour but the squirrel had enough of a head start that the race was already over before it began.

Secretly I’d cheered the squirrel, not letting Shannon know. She’d be crestfallen is she knew. Shannon’s job is to scare the squirrels off the bird feeders cause they scatter the seeds everywhere and then there are none for the birds. She does a good job and it’s an endless job cause the seeds are endless and the squirrels “never give up”. Ever. She’s not allowed to hurt the creatures, for they are for me to enjoy, but she is allowed to scare the daylights out of them. So far she has scared hundreds and not hurt any.

I watched the squirrel jump off the railing and land on the side of the oak it came in on and scamper way up, maybe 30 feet or so and then sat on a branch, safely out of Shannons reach. Shannon stood there staring at it for a moment and then sauntered back to me and lay down, touching me. I picked up my cup and took a long sip. A slurp really, and then another.

The sun was a little higher now, and a little warmer, and in a while it would be too hot for the porch. The was no other place I’d rather be right then. Believe me. Lois is doing well

Next post: The First Medal of Honor Ever Recorded