The other city was besieged by two armies clad in glittering armour. Their plan was to attempt to sack it, or accept instead a half of all its wealth. But the citizens resisted, and secretly were arming for an ambush, their beloved wives, the children, and the old left to defend the walls, while the rest set out, led by Ares and Athene, all made of gold. — HOMER 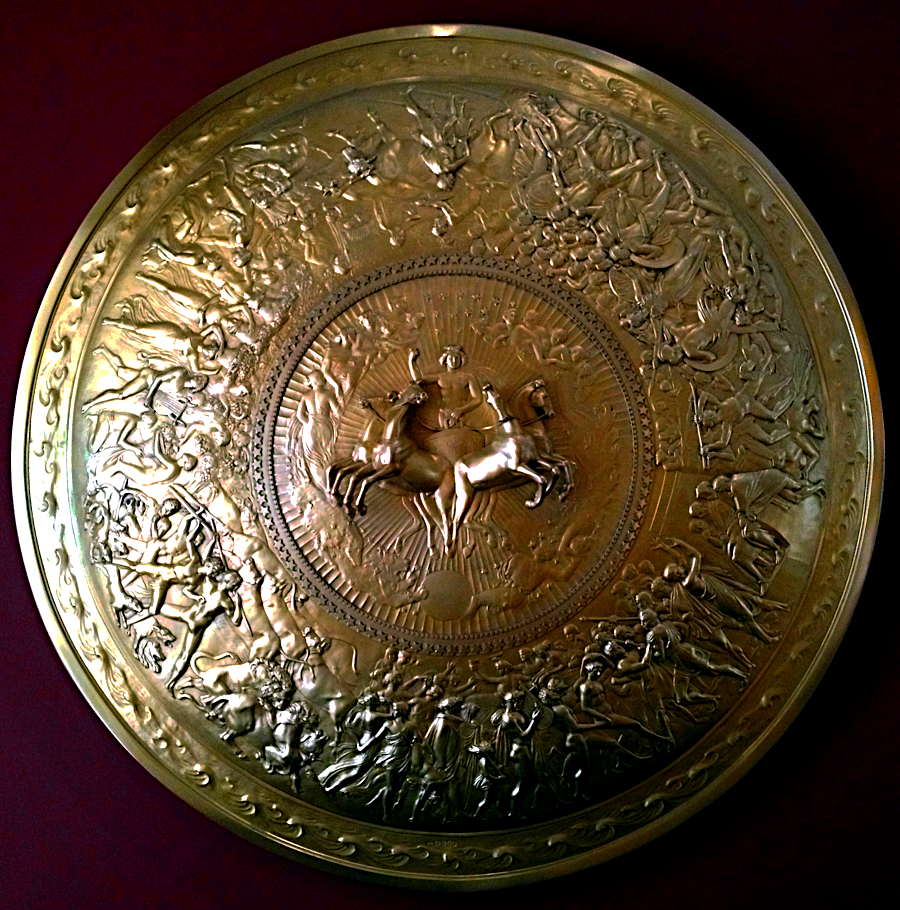 She looked over his shoulder
For vines and olive trees,
Marble well-governed cities
And ships upon untamed seas,
But there on the shining metal
His hands had put instead
An artificial wilderness
And a sky like lead.

A plain without a feature, bare and brown,
No blade of grass, no sign of neighborhood,
Nothing to eat and nowhere to sit down,
Yet, congregated on its blankness, stood
An unintelligible multitude,
A million eyes, a million boots in line,
Without expression, waiting for a sign.

Out of the air a voice without a face
Proved by statistics that some cause was just
In tones as dry and level as the place:
No one was cheered and nothing was discussed;
Column by column in a cloud of dust
They marched away enduring a belief
Whose logic brought them, somewhere else, to grief.

She looked over his shoulder
For ritual pieties,
White flower-garlanded heifers,
Libation and sacrifice,
But there on the shining metal
Where the altar should have been,
She saw by his flickering forge-light
Quite another scene.

Barbed wire enclosed an arbitrary spot
Where bored officials lounged (one cracked a joke)
And sentries sweated for the day was hot:
A crowd of ordinary decent folk
Watched from without and neither moved nor spoke
As three pale figures were led forth and bound
To three posts driven upright in the ground.

The mass and majesty of this world, all
That carries weight and always weighs the same
Lay in the hands of others; they were small
And could not hope for help and no help came:
What their foes like to do was done, their shame
Was all the worst could wish; they lost their pride
And died as men before their bodies died.

She looked over his shoulder
For athletes at their games,
Men and women in a dance
Moving their sweet limbs
Quick, quick, to music,
But there on the shining shield
His hands had set no dancing-floor
But a weed-choked field.

A ragged urchin, aimless and alone,
Loitered about that vacancy; a bird
Flew up to safety from his well-aimed stone:
That girls are raped, that two boys knife a third,
Were axioms to him, who’d never heard
Of any world where promises were kept,
Or one could weep because another wept.

The thin-lipped armorer,
Hephaestos, hobbled away,
Thetis of the shining breasts
Cried out in dismay
At what the god had wrought
To please her son, the strong
Iron-hearted man-slaying Achilles
Who would not live long. 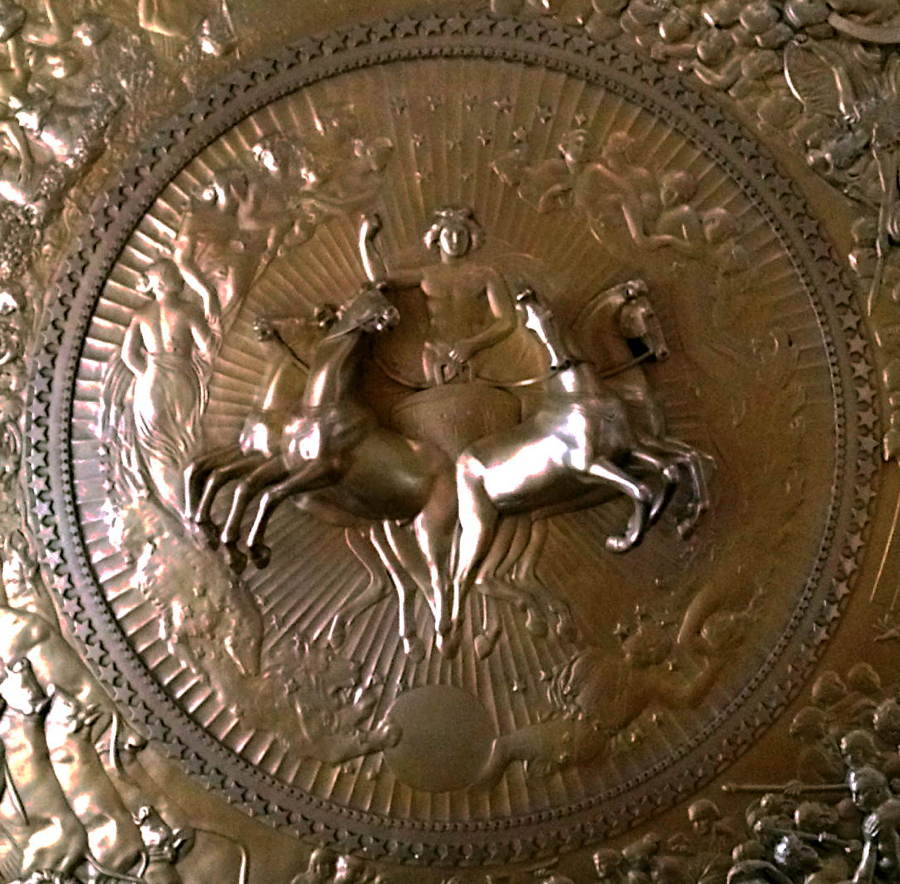 The Passage from which Auden derived his poem: Homer (c.750 BC) – The Iliad: Book XVIII

Into the crucibles went stubborn bronze, tin, precious gold and silver. He set up a great anvil on its block, and took a massive hammer in one hand and a pair of tongs in the other.

Then he first made a shield, broad and solid, adorning it skilfully everywhere, and setting round it a glittering triple rim, with a silver strap attached. Five layers it had, and he decorated it with subtle art.

On it he showed the earth, sea, sky, the tireless sun and the full moon, and all the constellations that crown the heavens, the Pleiades, Hyades, great Orion, and the Bear, that men also call the Wain, that circles round in its place, never bathing in Ocean’s stream, while gazing warily at Orion.

On it he showed two fine cities of mortal men. In one there were marriage feasts, and to the light of blazing torches, the brides were led from their rooms and through the city, to the sound of wedding songs. Young men circled in the dance, whirling round to flutes and lyres, while women stood in their doorways gazing. But the men had gathered in assembly, where two of them were arguing a case, contesting the blood price to be paid for another’s death. The defendant claimed he had paid all that was right, putting this to the people, but the accuser refused his acceptance, and the pair of them sought arbitration. Both were cheered by their supporters, whom the heralds firmly restrained. The Elders sat on the sacred bench, a semi-circle of polished stone, receiving the speaker’s staff from the loud-voiced heralds, and rising to give judgement in turn. At their feet lay two talents of gold, the fee for the one who gave the soundest judgement.

The other city was besieged by two armies clad in glittering armour. Their plan was to attempt to sack it, or accept instead a half of all its wealth. But the citizens resisted, and secretly were arming for an ambush, their beloved wives, the children, and the old left to defend the walls, while the rest set out, led by Ares and Athene, all made of gold. Tall and beautiful in their golden clothes and armour, as gods should look, they rose above the smaller warriors at their feet. Another scene showed them by a river, a watering place for the herds and a likely place to mount their ambush, and there they were seated in their bronze armour. Then in another two scouts were posted, waiting for sight of a herd of sheep or glossy cattle. Then there was shown the herds’ arrival, with two herdsmen behind playing flutes, ignorant of the cunning ambush. Then the ambushers were seen, rushing out to attack them as they neared, quickly cutting out the herd of cattle and the fine white flock of sheep, killing the herdsmen. Next, the besiegers were shown, sitting in assembly, or rising at the sound of cattle, or mounting behind their high-stepping steeds and racing towards the action. And finally he showed the ranks in battle at the river, attacking each other with bronze-tipped spears. Strife and Panic were at work, and ruthless Fate, here laying her hands on one man freshly wounded, there on another still unscathed, and next dragging a corpse through the chaos by its feet. The cloak about her shoulders was red with human blood. Just like living men they seemed to clash and fight, and drag away the bodies of those killed.

On the shield also, he depicted fallow-land, soft, rich, broad and thrice-ploughed, and on it ploughmen were driving their teams to and fro, and where they turned at the field’s end a man held a cup of honeyed wine in his hands to give to them, so they were eager to wheel about at the end of the rich furrow. Behind them the field, though made of gold, looked black as if it had been ploughed, a wonderful feature of the work.

On the shield also, he showed a royal estate, where labourers were reaping, with sharp sickles in their hands. Armfuls of corn were falling in swathes along the rows, while sheaves were being bound with twists of straw. Boys were gathering up the armfuls and carrying them to the three binders, while the king, staff in hand, stood joyfully and silently beside them. Heralds in the background beneath an oak were readying a feast, dressing a great sacrificial ox they had slaughtered, while women sprinkled the meat with white barley ready for the labourers to eat.

On the shield also, he portrayed in gold a fine vineyard laden with grapes, though the clusters of heavy fruit were black, and the vines were tied to silver poles. Round it was a ditch of blue enamel, and outside that a fence of tin and a single path led to it, that served for all the coming and going of harvest time. Girls and youths, were joyfully carrying off the ripe grapes in wicker baskets, while in their midst a boy sang of Linos, in a sweet treble voice, to the pleasant music of the clear-toned lyre. They all skipped along, with a chorus of cries, beating the earth in time, with dancing feet.

Then on the shield he showed a herd of straight-horned cattle, in gold and tin, lowing as they trotted from their byre to graze at a murmuring stream beside the swaying rushes. Four herdsmen, also in gold, walked beside them, and nine swift dogs ran behind. But in the next scene two savage lions in amongst the leaders were gripping a bull that bellowed loudly, dragging it off, pursued by youths and dogs. The lions had torn the bull’s flank open, and were devouring its innards, lapping the dark blood, while the herdsmen tried in vain to set the swift hounds on them, the dogs scared to grapple, but running in barking, then leaping aside.

On the shield, also, the lame master-smith added meadowland full of white sheep, in a fine valley, with sheepfolds, huts and pens.

Then he inlaid an intricate dancing floor like that which Daedalus once made in spacious Cnossos for long-haired Ariadne. Young men, and girls worth many cattle, were dancing there, their hands clasping one another’s wrists. The girls wore white linen with pretty garlands on their heads; the young men fine-woven tunics with a soft sheen, daggers of gold hanging from their silver belts. Here, they danced lightly with skilful steps, like the motion a potter gives his wheel when testing it out to see how it will run. There, they ran in lines to meet each other. And enjoying the lovely scene, a host of people stood round about, while a pair of acrobats whirled among them, keeping time to the dance.

Finally, round the rim of the solid shield, he laid out the mighty stream of Ocean.

Next post: Ukraine Good. Russia Bad. That is all ye know on Earth and all ye need to know.