The Patriot by the Park 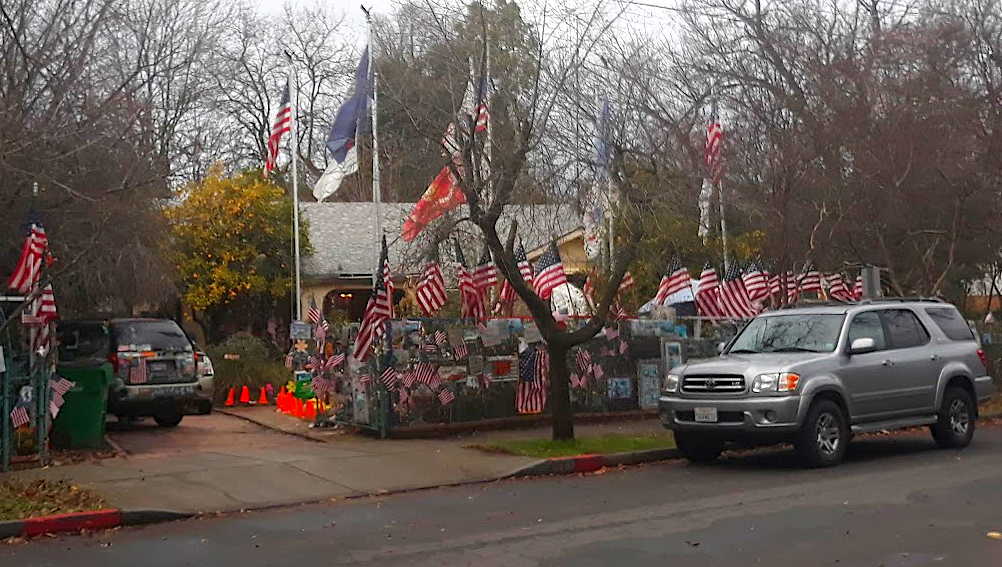 Chico is a collapsed hybrid of a place. It’s too big to be a town and too small to be a city. It sports a standard California college with the standard complement of insane “Studies” professors, Chemtrails conspiracy whack jobs, gays, lugs, thugs bugs, and befuddled and brain-clouded students. Chico is also at the top of the vast central valley’s limitless riches of rice, almonds, olives and other global commodities that express themselves in town in hidden centimillionaires behind the orchard screens and billionaire rice families’ Haciendas hidden somewhere out in the inland sea of rice paddies.

The result is that there is a chain of in-town islands to be found out in the countryside (A Jamaican Jerk restaurant in a sea of Walnut orchards? Ya mon) and many outposts of the country inside the wire of the town. (Hay and feed store right on the main drag in downtown still thriving nicely thank you.) At the core of this odd place, running right through its middle,  is One-Mile.

One-Mile is the town swimming hole; or rather the town swimming creek. One-Mile is where Butte Creek was diverted decades ago so a concrete pen about twenty yards across and a hundred yards long was laid and a dam built at the downstream end. Then Butte Creek was un-diverted and, presto, a community swimming creek. The town/city grew up around it and around the vast land of Bidwell Park which currently comprises some 3,600 acres and is more than 11 miles long.

A vast park but the one part used most and seen most by most people living in and visiting Chico is One-Mile. If you’ve got a message you want to get to the most people in town, print flyers and distribute them at One-Mile. And across the street from One-Mile is where the Patriot has his home.

In the many years I came to Chico before living here I’d note, from time to time, that the Patriot’s house was becoming more baroque. From a single flag pole with roses twined around the base, the Patriots’ American flags grew to multiple flag poles. As the Patriot became older lights were shown on the flags at night so he did not have to lower them.

At first, he’d cut out sections from the Declaration and the Constitution and laminate them and hang them from his fence as a kind of pedestrian tour of these documents. Then there were large quotes added from the heroes of America in war and peace; in poetry and song. All laminated to resist the rain and left to fade from the sun.

Over time the documents were joined by pictures of places like Mt. Rushmore and Gettysburg and Iwo Jima. These were joined by statues of heroes found in thrift shops. And then somehow the flags and the documents and the statues and pictures became some many and so varied that they all seemed to merge into one huge hymn from one man to his nation; one structure like Simon Rodia’s Watts Towers that revealed, unlike the blank everyday facades of the houses around him, the inner heart of this one man.

I saw the Patriot yesterday while walking in the park across from his home. He’s quite old now and in a walker attended by a companion. He came out of a side-door stooped over wearing one of those caps that show you the ship he served on. I think it was a submarine. He’s a small man made smaller now by age. He held a laminated sheet and made his way out of his yard and along his fence. To find a spot he had to make his slow way almost to end of his fence. Then he put it up and fastened it with wires and pliers to the chain link. Then he turned around and made his way back with his companion walking beside him.

In his yard, just before he went inside,  he paused at his first and still tallest flagpole to adjust the lights at its base so that even at night his flag would never be in darkness.

Next post: Something Wonderful: Dog reunited with owner after she’s been away for two years

Previous post: Trump at Davos: “This is not a time for pessimism; this is a time for optimism.”