The Nation’s Pants Are the Next Super-Spreader

It is an established medical fact (See Melvin Cohen and Sid Sackowitz, 2019. “Your pants or mine?” Norwegian Journal of Sardine Science) that afflatus carries virulent virus particles. 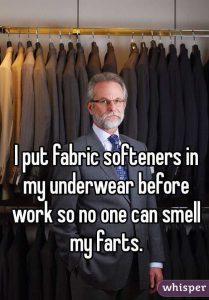 These eructations of poisonous miasma, passing through what is technically known in Pantology as the “pants seat,” or “beam housing,” which covers the orifice of the fundament, are a major risk factor to passersby and to toddlers who are standing around looking stupid, as toddlers so often do.

In other words, or woids, as I often say, mere pants seats offer little protection from infection from Covid-59,487.

In the case of Jerry Nadler, pants seats offer NO protection, as the seats of his off-the-rack cheap-ass suit pants have been worn thin to the point of translucence, by constant friction with his nether regions, or as is known in Proctological circles, his fat and apparently infinite ass. 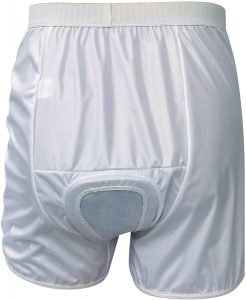 Therefore, all persons are hereby ordered to wear 4 pounds of cotton batting stapled to their nether regions. A four-inch thick section shall be inserted between the buttock spheres (or, in the case of Hillary Clinton, the Domes of Doom), extending from the spincter ani, across the perineum (or “Avenue to joy”) to the base of what is known in Urology and Pornography as “the pills” (or, in the case of women, the “Gateway to the Fun Parts”).

Failure to comply will be met with a tantrum, in which I stamp my little feet, or by forced watching of Adam Schiff as he shaves his endless neckage.

“Get the all-new Covid Depends, with its patented Flatus Protection System! Just insert our new and improved Massive Plug (equipped with standard charcoal filter) and wiggle around until it’s comfortably seated for extended wearage.

“You’ll say, ‘Boy, howdy! I never knew how much fun a good plugging could be.’

“Then simply wrap the Straps of Perpetual Penance around the waist, thus securing the cotton batting (our second line of defense) to the billowy parts.

“Yes, you’ll saunter with pride — or mince and prance as the spirit moves you — safe in the knowledge that your leaking buns will cause no harm.”

PS. On another topic, I believe something like the Boston Massacre will be required to light the fuse. Perhaps during a rally where the rattled democrat speaker calls in the cops, who, scared themselves, shoot a few patriots.
Lord help us.

And now, yet another shot.

[ Lance de Boyle n response to In all seriousness, a culture this stupid cannot survive.]

Next post: Interlude: The Allman Brothers Flow Into the Mystic

Previous post: In all seriousness, a culture this stupid cannot survive.