The Maxims and Morals of Happy Acres 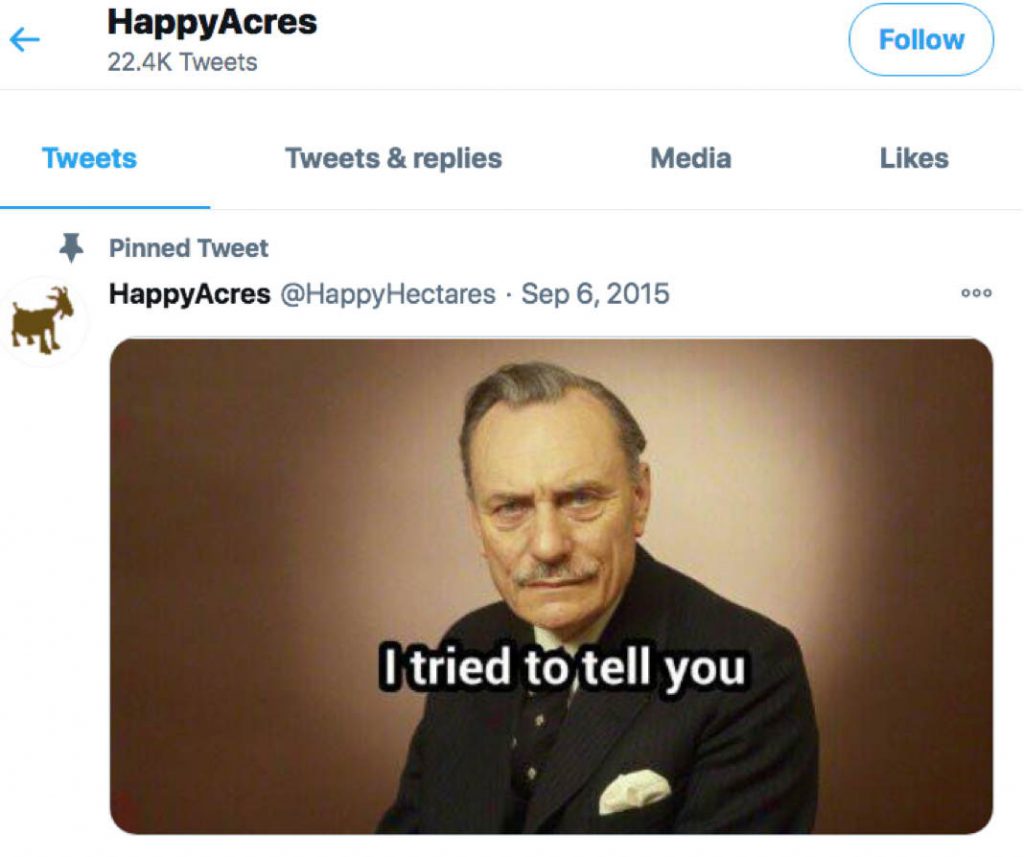 That’s Enoch Powell in the pinned tweet. He’s there because of the ‘Rivers of Blood’speech he gave when England was circling the drain but had not yet been flushed.

Here is the means of showing that the immigrant communities can organise to consolidate their members, to agitate and campaign against their fellow citizens, and to overawe and dominate the rest with the legal weapons which the ignorant and the ill-informed have provided. As I look ahead, I am filled with foreboding; like the Roman, I seem to see “the River Tiber foaming with much blood.” That tragic and intractable phenomenon which we watch with horror on the other side of the Atlantic but which there is interwoven with the history and existence of the States itself, is coming upon us here by our own volition and our own neglect. Indeed, it has all but come. In numerical terms, it will be of American proportions long before the end of the century. — Enoch Powell’s ‘Rivers of Blood’ speech

I was proud when over two years ago Twitter booted me for saying intemperate things to other tweeters. I said only things that were true mind you but those things were, it seems, untweetable at the time and are doubleplusungood to tweet today. Thus the ban hammer struck me off the lists. As a result, I tweeteth not. But that does not mean I do not follow a few untwembling Tweeters who are still given leave to speak or squeak for now. To speak until the next Twitter purge as the platform descends into the realm of deep boredom where things like MySpace and Friendster and Digg bloat and tumble like fatburgs festering in the sewers of the Net.

Of the few Tweeters I still follow on Twiter one daily source of quiet pleasure is HappyAcres (@HappyHectares)  I commend it to those here of like mind.

As best I can tell the gentleman behind it lives and posts from somewhere around Placerville in the foothills of the Sierras. From his happy perch, he loves to comment on the slow-rolling disaster that is celebrated everywhere in the flatlands of Progresifornia. Here’s a sampling of his random observations over just the last two weeks.

Average people like the authorities to treat them as children. It’s me who’s the misfit.

For my considered judgment is that progressivism does not lead mankind to a better future, I can soon expect to be named Enemy of the People

The postmodern take (beneath the hermetic verbiage) seem to be “brown feelings were hurt by white success” and “brown feelings are more powerful than science” and “white man bad” That’s it. Just silly childish grunts.

Giving women the vote guarantees a socialistic therapeutic inclusive society that talks in kindergarten language. There’s no way around that.

If this guy’s like the others, he gets a monthly check from taxpayers for being a junkie, which he promptly spends on junk, after which he steals for the rest of the month.

This is allowed, therefore it’s approved. Believe me, gov’t doesn’t allow what it disapproves.

Something’s not right. Why doesn’t the Left provide us a demonstration woke community so we can see it and be persuaded? If I had the keys to utopia, that’s what I’d do But with the Left there’s never a pilot program…

How many make a nice middle-class life from a career in the Homeless Industry? 10,000? 100,000? All I know is that the Homelessness Industry doesn’t act like it want its raison d’être to disappear.

Do normies really thrill to “the first black Batwoman” ? Newspapers act like they do, but I actually don’t know. Have they been reliably trained, is what I’m asking

With age you approach the foothills of enlightenment and find there’s less and less urge to belabor the world’s folly. “It is what it is” both my plumber and the Buddha say

To repeat: One of the few Tweeters I still follow on Twitter for pleasure is HappyAcres (aka @HappyHectares) I commend him to those here of like mind.  Give him my regards.

Next post: Warnings of Doom and the Site Certification Issue